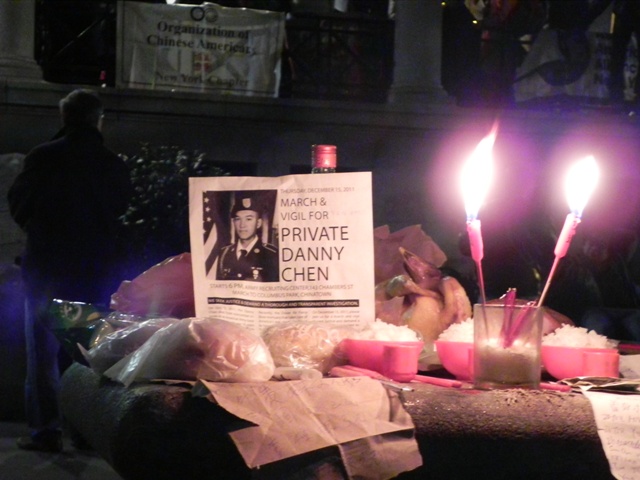 Each of the coverage below reflects a different way each media outlet has chosen to make this story of an Asian American soldier public.  A change is underway in how much audiences are encouraged to sympathize with Asian people, their faces, their stories, even their community.  Perhaps the last story of its kind was over twenty years ago when the film Who Killed Vincent Chin by Christine Choy came out, the impact generated a new generation determined to defend and advocate for Asian Americans and their communities.

AAAC invites you to look closely at this story as it unfolds in the media.  Where will it lead and what will it mean for the next generation of Americans - Asian Pacific Americans, Americans of every background - a multicultural diverse multitude.  AAAC invites artists to create art work on any facet of this, however you view this in relation to the art you do.  For those who do figurative work, we invite you to do portraits of Danny Chen, however you conceive of what portraiture is.

AAAC will make a separate place on its blog for this subject so that those interested in writing on this subject can be posted and a useful dialogue can ensue. AAAC will appreciate particularly those written pieces or comments on the human implications, the cultural side of this story.  Here is a young person who does not fit the Model Minority Myth.  It is a chance to sketch in for Americans who we really are and undo some at least of all that separates us.  The media too is also part of this subject, open to praise as well as critique.

AAAC has expanded its online capacity and will do what is possible for the public to see and contemplate what is created.  It is too early at this point to talk of exhibition sites and dates, collaborations or art proposals.  That will have to come in time.  We are interested in those artists who want to get together, even if it has to be only for those in the NYC area, or a conference call to bring together voices over a broader geographic area. This is a moment for all artists, of every background, for all of us to be seen in a new light. There is much to talk about culturally, politically, artistically.  We may be able to intro those interested who live in the same city so conversations can start elsewhere.

The military culture that our civic life in the USA is so depended on is also not exempt from a critical cultural perspective, how it ties into who we are as people.

Asian Americans have a role in what this land will become.  When I heard Danny's mom tremble as she spoke, she filled the silence in the room at CCBA with what was nearly tangible. Then later I saw how media sought to avoid or capture this. It was clear then, Art and Artists have something to say.

I look forward to hearing from you. 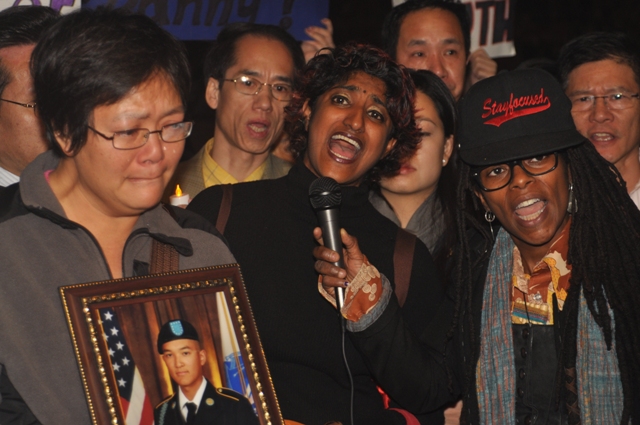 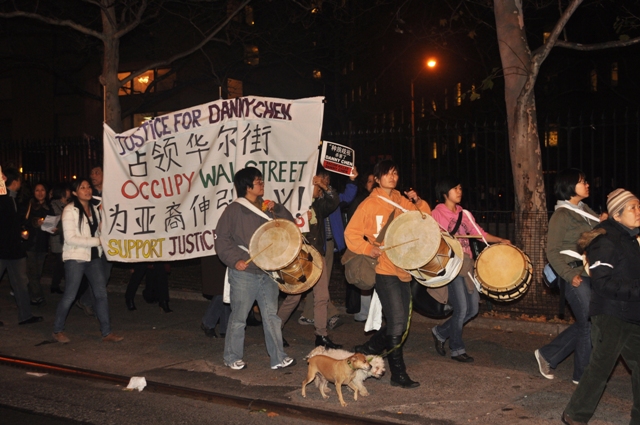 Banner and drummers at the march.
Tagged