The Chinatown Health Clinic, now the CBWCHC, started around the same time as Basement Workshop where AAAC began. Both organizations shared shared volunteers at 22 Catherine St where Basement Workshop was on the 3rd floor and the Health Clinic was on the 2ed floor. Thats when the Chinatown Street Fair* took place in 1973 and I designed the poster for this ground breaking event that organized and awakened so many youth of that era.  This poster I recently re-discovered and gave to Regina for CBWCHC's collection of the documents that mark the beginnings of their history. A picture of it is in the book on one of the Street Fair stalls we built on Mott St.  Many memories will be shared at MoCA at the Health Center’s talk on their new book recounting the story of building this important community organization - on March 1.
*Note: The first street fair was in 1971 at Father Tang's church on Henry Street focused more on health, the second one in 73' featured things other than health sparking both social and political awakening of the Asian American Movement.

Performance artist Li Ning turns his life into art in this epic work of experimental documentary. For five grueling years, Li documents his struggle to achieve success as an avant-garde artist while contending with the pressures of modern life in China. He is caught between two families: his wife, son and mother, whom he can barely support; and his enthusiastic but disorganized guerilla dance troupe. Li’s chaotic life becomes inseparable from the act of taping it, as if his experiences can only make sense on screen. Tape shatters documentary conventions, utilizing a variety of approaches, including guerilla documentary, experimental street video, even CGI. The film captures a decade’s worth of artistic aspirations and failures, while breaking new ground in individual expression in China.
Synopsis courtesy of dGenerate Films.

“A riveting portrait of an artist’s attempts at expression and conflicts with societal norms.”
– Museum of Modern Art

We had so much fun during the parade! Happy Lunar New Year to everyone! We look forward to next year's parade. We need more people to join us! Trust us, its really fun!

Karen in her mahjong costume with a bird on her head. 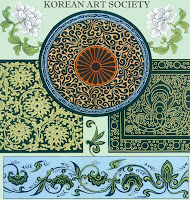 The Korean Art Society owns the world's largest collection of English-language books on Korean art. The entire collection is now displayed at 400 West 43rd Street, in Times Square. Thousands of publications are available for you to borrow, including many books that are so rare that they are almost impossible to find. All of the publications are arranged by subject, so it is very easy to find material on a wide range of Korean art subjects. The collection includes every Korean art auction catalog ever published, along with all of the auction results. This library is open to the public as part of our effort to promote Korean art, and so that everyone can enjoy the results of their ongoing international search for publications on Korean art and culture.


For more info, go to www.koreanartsociety.org