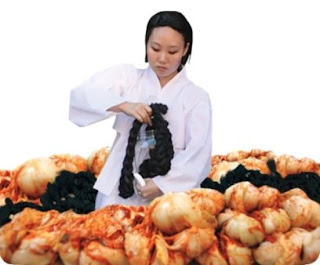 The Richard and Mica Hadar Foundation, in collaboration with Cuchifritos Gallery and Project Space, is pleased to announce Daeng’gi Kimchi Factory, an installation by Flora Choi, from December 22, 2011 to January 15, 2012. In her performance/installation, Choi substitutes chopped-off daeng'gi braids (a traditional Korean hairstyle worn by adolescent girls) for cabbage, and makes her own version of Kimchi. Choi confronts the male-dominated traditions of the past and investigates the state of women in Korea today. Her installation will be accompanied by live performances on December 22 (5-7pm), December 30 (3-4pm), January 6 (3pm-4pm), and January 13 (3pm-4pm). Flora Choi is an installation and performance artist. Her current work investigates Korea’s cultural traditions and societal constructs. She holds a BFA from Maryland Institute College of Art (MICA), and lives and works in Queens, NY. She has most recently shown her performance work at the annual art festival Art in Odd Places, which hosted her piece Upbraiding Tradition along 14th Street in Manhattan. Choi is a Richard and Mica Hadar Foundation Scholar, and is currently part of the foundation’s group exhibition I Live/ I Love running from December 27, 2011 through January 7, 2012 at Second Space Gallery, in which she is showing work that derives from her Upbraiding Tradition performance piece. The show is curated by a team of Hadar mentors, including video and performance artist Bill Beirne, independent curator Erin Donnelly, and educator Beth Rosenberg. The Hadar Foundation art committee selected Choi for a solo show due to the strength of her artistic vision and her ability to present a solo project of significant scope. One of the foundation’s goals is to offer more in-depth support to an artist of promise.You may view Choi's work at www.florachoi.com.

At an American Army base in Kandahar Province of Afghanistan on October 3rd 2011, Private Danny Chen was found dead in the living quarters of the army base where he was stationed with an alleged gunshot wound below his chin.
The US military has informed his family, a 19 year old from Lower Manhattan’s Chinatown, in NYC, that he had been beaten by superior officers and subjected to racially motivated taunts prior to his death. The military has said they are continuing their investigation. Danny Chen was laid to rest on October 13, and the family still has not received any report or explanation for their tragic loss.

This is one of a number of recent cases of hazing in the military that has led to the deaths of Asian Americans while in service in the US military. Without strong advocacy, such cases are rarely covered adequately, except in the local press. This parallels a major problem that is now receiving attention, of bullying in schools and colleges that can have a lasting impact on young people lives. This question has now been taken up by an Asian American Initiative in the White House.

The members of Occupy Wall Street (“OWS”) takes this opportunity to join with Asian Americans and the Chinatown community to march for justice for Private Danny Chen on December 15, 6pm.  Starting at the Army Recruiting Center at 143 Chambers St and marching to Columbus Park, members and supporters of Occupy Wall Street as the 99%, wish to demonstrate that the concerns and issues of all the diverse neighborhoods of New York City are part of what is real and important to all who are part of the OWS family.  Particularly for Asian Americans – the broad diversity of Asians in the United States, who have often been forgotten when the questions of justice and inequity are raised, OWS affirms our rich cultural diversity as assets, and wants to emphasize, that the differences of race and culture will not impede, but rather enhance the broad coming together of people for justice and change.

OWS supports the Chinatown community’s demand for a transparent investigation, and the goals of justice for Private Danny Chen. The army and the US military must make clear what affirmative steps they are taking to integrate, support, and protect its soldiers.
Read more 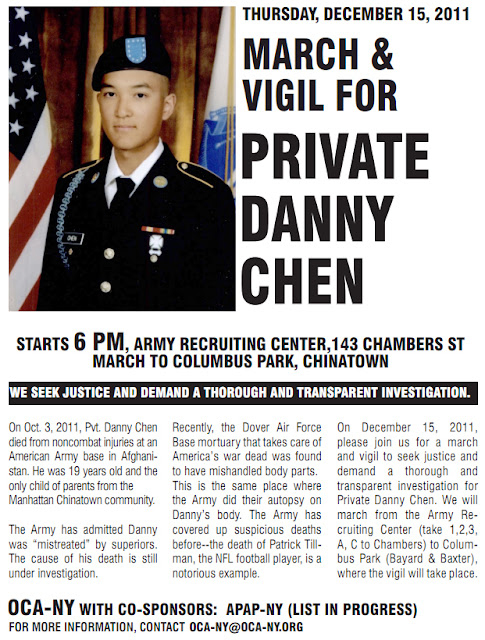