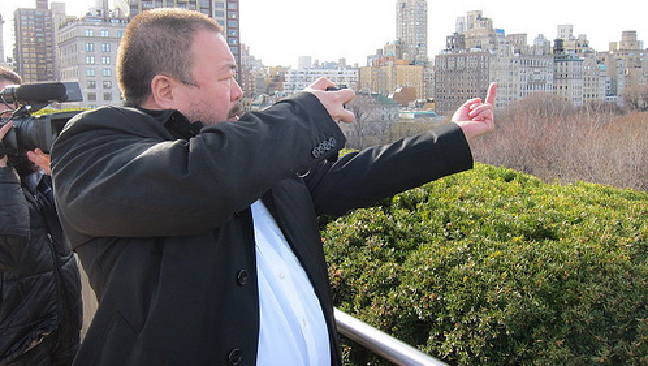 Ym Yik/European Pressphoto AgencyDemonstrators carrying posters of the artist Ai Weiwei gathered outside a Chinese government office in Hong Kong this week.
Artists and curators will hold a sit-in outside Chinese embassies and consulates on Sunday to protest the detention of the Chinese artist Ai Weiwei. Mr. Ai was detained on April 3; on April 7, a Chinese official told The Times that he was being held on suspicion of “economic crimes.”
The form of Sunday’s planned protest—in which participants will bring chairs and sit down outside Chinese government buildings around the world — draws on an installation titled “Fairytale: 1001 Qing Dynasty Wooden Chairs,” which Mr. Ai did at Documenta in Kassel, Germany, in 2007. In it, he arranged 1,001 late Ming and Qing Dynasty wooden chairs around the exhibition; he also recruited 1,001 Chinese citizens through the Internet to volunteer to go and live in Kassel for the length of the show. The plan for the protest took shape after Anne Pasternak, the president of Creative Time, posted a question on Facebook asking what the art community could do to support Mr. Ai’s release. Steven Holmes, an adjunct curator at the Bass Museum of Art in Miami Beach, listed “about 11 ideas all based on Ai Weiwei’s work, and I thought that was really beautiful,” Ms. Pasternak said in an interview.
With a friend from Sweden and others, Ms. Pasternak put up a Facebook page for the protest, titled “1,001 Chairs for Ai Weiwei.” The protest will take place at 1 p.m. on Sunday. 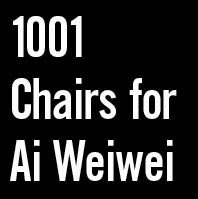 Artist and activist Ai Weiwei is an internationally regarded figure who has fought for artistic freedom and for freedom of speech throughout his distinguished career, envisioning and shaping a more just and equitablesociety through his work. He has been missing since his arrest on April 3rd in Beijing.

Steven Holmes was inspired by facebook discussion on what art communities can do to support the safe release of Ai Weiwei. He proposed to reenact Ai Weiwei's project Fairytale: 1,0001 Qing Dynasty Wooden Chairs—an installation which was comprised of 1,001 late Ming and Qing Dynasty wooden chairs at Documenta 12 in 2007 in Kassel, Germany—in front of Chinese embassies and consulates around the world.
This Sunday, April 17, at 1 PM local time, supporters are invited to participate in 1001 Chairs for Ai Weiwei, by bringing a chair and gathering outside Chinese embassies and consulates to sit peacefully in support of the artist’s immediate release.

"TO JAPAN WITH LOVE" Fundraising Event 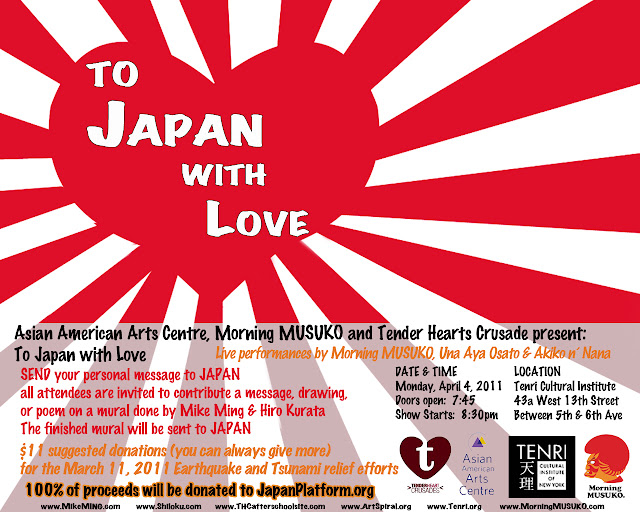 TO JAPAN WITH LOVE

Featuring live performance by Morning MUSUKO
Participatory art mural for all to join in - done by Mike Ming and Hiro Kurata.

Morning MUSUKO is developing a community that actively creates and supports the cross- cultural understanding between Japan and other nations and peoples. Their music seeks to inspire and connect a growing and willing international community to accept and incorporate different cultures, music, and ideas.

Participatory art mural done by Mike Ming and Hiro Kurata will enable personal messages to be sent to the earthquake victims in Japan. All attendees are invited to contribute a message, drawing, or poem on the mural prepared by Mike & Hiro, which will be displayed in Japan.

At the door $11 is the suggested donation (more is welcome) for the March 11,2011 Earthquake and Tsunami relief efforts.

“I found the performance of Morning Musuko to be really amazing, At times, to me it was a blend of pop music meets the big band era with a bit of Jazz thrown into the mix. Truly unique and memorable.” - Michael G. re: Gerswhin show 12/20/10