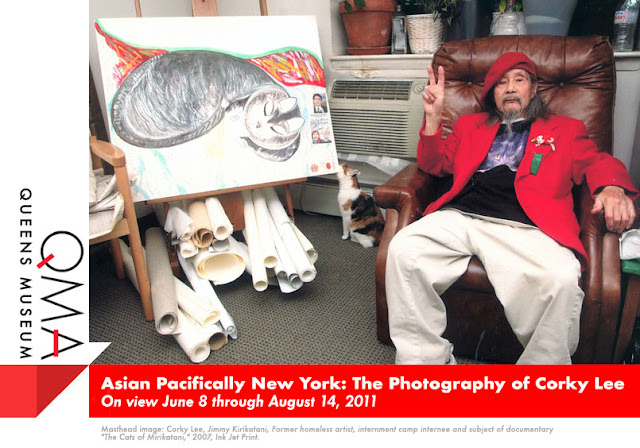 Set inside the Queens Museum of Art’s magnificent Panorama of the City of New York, this exhibition presents the artist’s long-term commitment to documenting the experiences of Asian and Pacific Islander American communities of New York. These communities comprise 12% of the city’s population,  who are perhaps seen but not well understood. By capturing the geographically, culturally and linguistically disparate communities under a pan ethnic-framework, Corky Lee hopes to highlight a political solidarity and shared identity forged in the American and New York contexts. These contemporary images challenge centuries-old ideologies and representations, and thus becomes instrumental in reconstructing and redefining a population that will continue to flower as engaged citizens and take their rightful place in America. With the understanding that the 10th anniversary is close at hand, some images will hone in on issues of immigration and post-9/11 experiences. Drawing on the diasporic impressions, Corky also includes an image of the detained Chinese artist, Ai Wei Wei from 1989 during pro-democracy protests.

There are 18 of the 36 photographs spanning Corky's 40 years of work on QMA's website. Additional photos will be projected across the 9,335 sq. ft. 3-D display during the reception.

This exhibition is an extension of QMA’s Partnership Gallery program.

QMA will provide a free shuttle bus at the #7 train, Willets Pt. (Citi Field) to the museum between 2:30 & 6PM. By LIRR, the stop is Mets-Willets Pt. The walk from the station is approximately 10 minutes. Head towards Unisphere & QMA. There is limited free parking.
QMA is open late on Fridays until 8PM during July & August.

Corky Lee is a New York based photographer whose subjects frequently depicts concepts of Asian American assertion and awareness in the social and public life of New Yorkers and indeed, of all Asians in the US. As a second generation Chinese-American, Corky grew up in Queens during the Civil Rights era. He has been described as the “undisputed unofficial Asian American Photographer Laureate,” with his work depicting pinnacle moments such as the events following the Vincent Chin murder and the 1975 protests at City Hall. In addition, Corky’s skills have been employed by a variety of media outlets, including Time Magazine, the New York Times and the New York Post. His photographs, spanning over a forty year period, are currently being displayed at the Queens Museum until August 14th in an exhibit titled, “Asian Pacifically New York: The Photography of Corky Lee.”

Corky exhibited at the AAAC in November 1994 in Photography and Community: AAAC Annual. He served as curator for the exhibition, Not Your Chop Suey Chinatown: Eight Photographers selected by Corky Lee in December 2002. He was also part of The AAAC Story, Spring of 2002 – a collaboration with Asian/ Pacific/ American Studies Program at New York University - a critical review of the Arts Centre's work to date with one hundred artists from AAAC Permanent Collection.

“Who has not heard one of Corky’s stories? At the drop of a hat he can cite what was happening at the moment a photo was taken, even those long ago. We recognize Corky as a community photographer. Let’s also recognize him for the flip side of his work, as the, ‘undisputed unofficial Asian American Historian Laureate’.” - Bob Lee 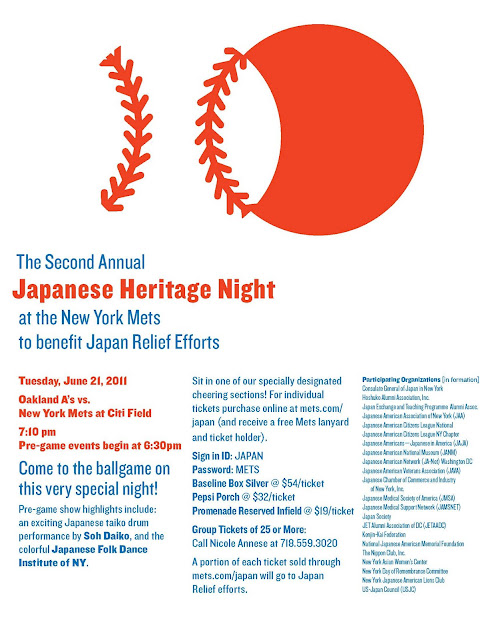 This year Japan has been hit hard by the tragic events that occurred in March. Much still needs to be done and Japanese Heritage Night has the potential to be a significant fundraising event. A portion of each ticket sold through our group will go to Japan relief efforts. The more tickets are sold, the more the Mets will donate.

Recent fund raising for Japan event by AAAC: To Japan With Love

The film screening of Kim Loo Sisters: Portraits In Four Part Harmony was held on Tuesday, May 31th 2011 at the Houston Street Center at University Settlement. A discussion/q&a of the film with the director Leslie Li was followed after the screening. 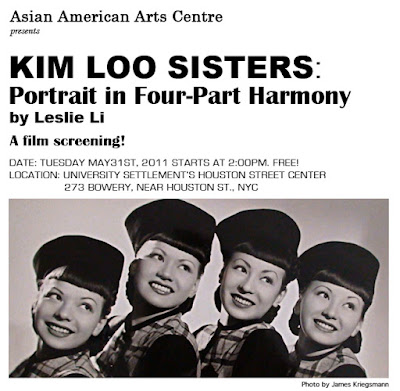