A special meeting of Chinatown Working Group (CWG) was called by the Community Board 3, bringing together members of the Department of City Planning (DCP). It is rare to have the DCP come to talk. The community is very upset after working for 8 years to produce 197a plan, then having the city refuse to look at it. Now there is an agreement that CWG will change the plan to 197c plan, so they’re only looking at certain portions of the plan (3 portions). They now want to hear from the community about recommendations so that DCP can begin to process it. 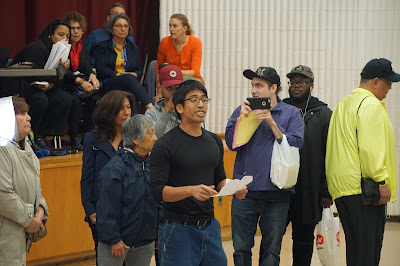 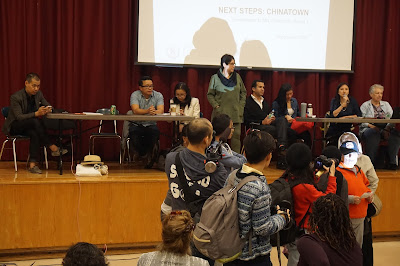 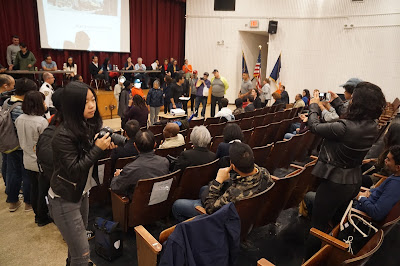 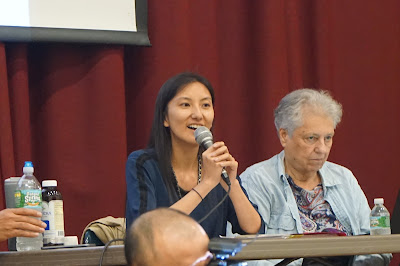 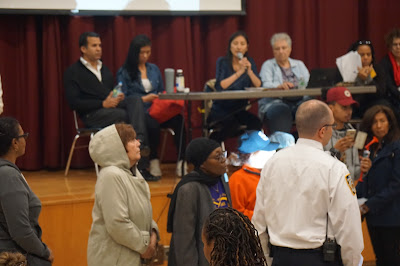 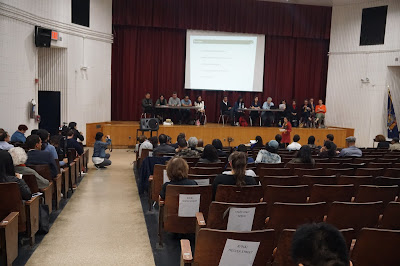 A noisy demonstration out on the street began early by some of the more left leaning community groups that have been participating in the last several years of creating the plan. After some clarification of what the purpose of this meeting was, a number of the Community Board 3 members spoke of how much they support the CWG plan and how they refuse to be forced by DeBlasio’s DCP department. Some say it’s been 6 years of work. Whether it be 6 years or 8 years, it is scandalous that the city would sit by and let Chinatown work all those years and now refuse to examine the whole plan. Their explanation is that it will take a number of years just to really process the sections of the plan dealing with the local Chinatown zones. And it would simply take too many years to cover the other sections of the plan that deal with outlying areas.

Unfortunately this includes the waterfront, where major construction is underway. DCP’s explanation for why there are no regulations for low income housing requirements along the waterfront is quite obscure, but apparently DCP staff are locked into the regulations of how the city requires R10 to be up zoned to MIG (don’t ask me what that means or if it’s correct) status. However, that’s the first explanation from the horse’s mouth I ever got in 8 years. Some groups will hate me for it, however, it’s clear that DCP staff are working within their own limitations. The outcry from some of the members of the Community Board 3 on stage is that this opportunity to have this rare meeting and not discuss all sections, particularly the waterfront, which itself could totally transform Chinatown, is a bureaucratic way to fail in addressing the need to save Chinatown and zone it adequately.

By 8’ o clock, when the meeting ended, with some sense of having been productive, the City, the Community Board 3, and those of us who have stuck through  so many years of giving time and effort to Chinatown’s 197 plan, went home outside PS130. As I left, many of the key people were still standing at the front of the school, discussing all the issues.
Amidst all the protest and confusion, I was able to insert into the discussion how the arts can bring greater prosperity to our community.

I thank Margaret Chin for staying there for the complete meeting, even into the night, as she has done since I’ve known her for so many years. 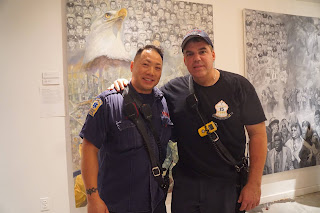 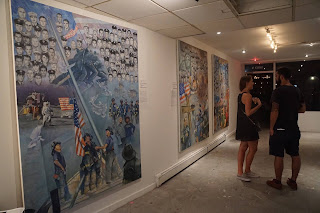 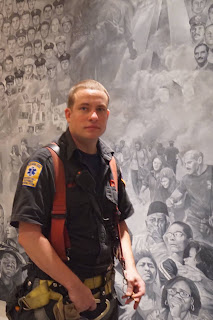 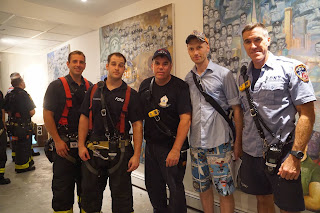 The Asian American Arts Centre presents “FIRST RESPONDERS”, a solo exhibition featuring the work of artist Yang Yi 杨亿. Presented in collaboration with Chinatown Soup and in partnership with Chinatown Partnership Local Development Corporation - CPLDC. This is a special exhibition to mark the anniversary of this moment in our nation’s history. AAAC is proud to present this body of work as both a commemoration and celebration of the American spirit embodied by all New Yorkers whose response to the events of that day will forever mark our national memory. It is fitting that as Americans we should find an immigrant whose remarkable skills and devotion gives to us the fruits of his heart and his labor.

Yi’s pentaptych took five years to complete, gives tribute to the brave members of the FDNY and paramedics, featuring all 343 faces of the first responders who were killed at the World Trade Center 15 years ago. Yi’s work has struck a chord with the firefighters who have previewed it, and the Asian American Arts Centre welcomes the opportunity to share his work with all New Yorkers, visitors to the city, and to the Asian American community.

About the Artist Yang Yi, 59, came to the United States from China in 1995 where he soon made a living drawing portraits in Central Park. Following the 9/11 terror attacks, many people would show Yang Yi photos of their loved ones who had lost their lives, asking him to create a portrait. In 2010, Yi saw a mural on the side of the Flushing firehouse that inspired him to paint a tribute of his own. Working out of his small apartment in Flushing, Queens, Yi took five years to create the five canvases presented. A portrait artist by trade, Yang had to care for his family while taking time off from his usual work to create a tableau of events and symbol’s from the city’s difficult days. Images of debris-covered survivors, the American flag flying above the wreckage, along with moving portraits of every individual face.

The exhibition is expected to travel later this year to Sumei Arts Center’s firehouse in Newark, NJ. Updates on all future events will be posted on AAAC’s social media outlets, including a link to a Kickstarter for this commemorative project.