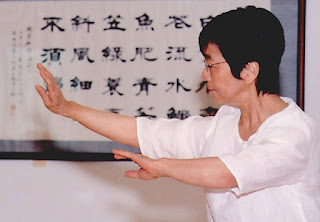 Taichi Chuan, a martial art form of ancient China, promotes health and wellness. A series of slow continuous movements with low impact on the body, Taichi increases energy and vitality, relieves pain and fatigue, improves balance and coordination, as well as many other health benefits. Coordinated with breathing, Taichi Chuan is known as moving meditation, a practice done regularly builds to enhance mental acuity and wellness.

Testimonial from a tai chi student.
I am 71.  I started studying Tai chi with Eleanor Yung in the 90's.  I was younger then and did not take my taichi seriously; it was something I did for fun. I stopped for a long while. Maybe six or seven years.  After I stopped I began to notice how my body aged I began to develop arthritis, I gained weight. One day I remembered my tai chi and started doing chapter one it was all I could remember so I did this occasionally and noticed how great I felt after doing it. I started taking tai chi again last year. I was desperate to learn all of the form. So I practiced everyday for one or two hours sometimes more. I also did my chi gung exercises before I did my tai chi as a warm up. This is the way Eleanor taught us long ago. I became more supple and tai chi strengthened both my legs and neck and improved my balance.  In the allergy season the taichi with the chi gung exercises lowers my immune response to pollen. I don't ever want to stop doing my tai chi again.

For those interested, please register with Eleanor Yung L.Ac. at eleayung@gmail.com.

Some articles of interest:


Eleanor Yung, L.Ac. has been teaching Taichi Chuan and Qigong for more than 20 years, and is teaching at the Pacific College of Oriental Medicine, Metropolitan Museum of Art, and private classes. She is a NYS licensed acupuncturist and practices in Chinatown.
Read more
Newer Posts Older Posts
Subscribe to: Posts ( Atom )