Its relation to the Asian American movement; its emergence from the activities of the Basement Workshop (1970-mid1980s); Its establishment as the non-profit Asian American Dance Theatre in 1974 and changing to its current name in 1986; its expansion to include the presentation of contemporary art exhibitions in 1983, as well as its other folk art and educational programs and activities.

Investigating the early history of New York alternative spaces, this panel looks at the genesis, culture and legacy of this movement in the context of activism and political agency.

Please RSVP to this event: http://www.exitart.org/support/rsvp. Each public event during the Alternative Histories exhibition is $5.00 which can be paid on line or at the door.
Read more

Celebrate the 5,000 year history of traditional Chinese arts and textiles and the endangered artists who are slowly vanishing due to lack of civic support and market economies. Highlights of past and present work created by indigenous artists living in Southwestern China and Hainan Island, including exquisite textiles, traditional lacquer-ware, and ritual masks.

From the private collection of Andrew and Lily Wang.

An exhibit of exquisite textiles, traditional lacquer-ware, and ritual masks by indigenous artists living in Southwestern China and Hainan Island.

The history of traditional arts and textiles in China spans over 5000 years and has influenced arts and culture across Asia and around the world. Today these artists are slowly vanishing due to lack of civic support and market economies that de-emphasize the value of quality artwork created by traditional methods and materials. This exhibition highlights both past and present work created by traditional artists from minority ethnic groups Miao, Gejia, Tujia, Gelao, Yao, Yi, Dai, Li, and Zhang who live in areas across Southwestern China and in Hainan Island. One of the goals of including old and new pieces in this exhibit is to help us appreciate an art form that, while ancient in practice, is still alive in the hands of these indigenous artists. As members of the global community and patrons of the arts, what is our role, if any, to support these artists so that they can continue these traditional practices to create new work and pass the skills on to future generations? What would it mean if the artists and skills needed to create this kind of work became a thing of the past? 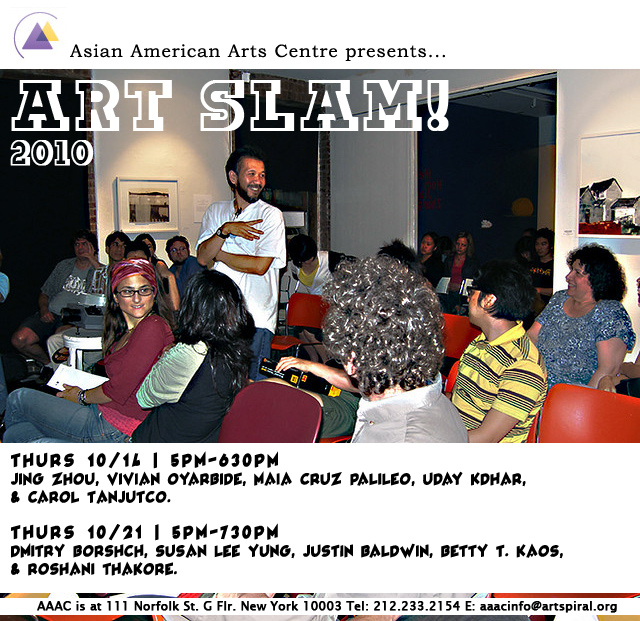 630PM- 730PM immediately following the ArtSlam Presentations (see below for more information)
For the past several years, the Asian American Arts Centre has held a series of art slams, allowing emerging artists the opportunity to present and talk about their work, meet and network with each other as well as with more established artists and critics/curators. Last year, the Centre hosted three slide slams, showcasing the work of fifteen artists working in various media.

*The October 21st Art Slam will feature a special potluck event (dish encouraged but not required to attend!) to support and promote the Asian American Arts Centre community.  Please join us at 5 pm to see artist presentations and stay to enjoy food and meet staff, artists, and friends!


Admission is FREE. EVERYONE is invited. BRING YOUR FRIENDS!


The ART SLAM series is made possible in part with public funds from the New York State Council on the Arts, a state agency and from The New York Department of Cultural Affairs. The Asian American Arts Centre was founded in 1974 in New York City as a not-for-profit organization to address the distinctive concerns of Asian Americans in the United States. Its mission is to promote the preservation and creative vitality of Asian American cultural growth through the arts, and its historical and aesthetic linkage to other communities.

The Flomenhaft Gallery is proud to present Roger Shimomura’s newest series of artworks, “An American Knockoff.”  The title eludes to Shimomura’s experience as a third generation American citizen who is all too often asked what part of Japan he comes from, and is too often misconnected to so-called “oriental” physical and behavioral traits.  Actually he was born in Seattle and unfortunately spent several years of his childhood in an internment camp, Minidoka, in Idaho.  These works are his “attempt to ameliorate the outrage of the misconceptions” and “in tongue-in-cheek fashion he becomes the same stereotypes.”

Shimomura’s newest paintings, in fabulous color, almost all include a self portrait.  We see him, in art critic Lucy Lippard’s words “kicking ass” at his own country.  They are dynamic, filled with references to pop art, in works such as “American vs. Disney Stereotypes.”  The paintings include Mickey Mouse, Bugs Bunny, Donald Duck, Popeye and the three little pigs, also Ukiyo theater folk.   Often mistaken for Chinese, he goes for it and represents himself as a “Chinese Imposter,” as a General leading his Chinese army, and in other works he stands in for a Chinese communist, but also points at the color confusion by representing celebrants of Mao.  A most powerful work represents the conundrum in Shimomura’s life, “American vs. Japs.”  It shows him acting the part of a Japanese American, making a distinction between himself and the Japanese enemy during WWII.  Here he kicks the Jap’s ass.  What a turn of events.

Roger Shimomura, in painting, prints and theater pieces has always addressed the sociopolitical issues of Asian Americans.  He has had over 125 solo exhibitions and has presented theater pieces throughout the country.  He is the recipient of more than 30 grants, four of which came from the National Endowment for the Arts Fellowship in Painting and Performance Art.  He has lectured and has been a visiting artist at more than 200 universities, and the College Art Association presented him with the Artist Award for Most Distinguished Body of Work in 2002 for his four year, twelve museum tour of the painting exhibition “An American Diary.”  It was based on the diaries his grandmother kept from the time she came to America as a photograph wife and includes her experiences in Minidoka.  Shimomura was a Distinguished Professor at the School of Fine Arts at the University of Kansas, Lawrence, from 1969 until he retired in 2004. He is now the University Distinguished Professor of Art Emeritus of the University of Kansas.

Presently there is a travelling show entitled “Yellow Terror: the Collection and Paintings of Roger Shimomura,” co-curated by Roger and Dr. Stacey Uradomo-Barre, the curator for the Art in Public Places Program of the Hawaiian State Foundation on Culture and the Arts.  It was produced by the Wing Luke Museum, Seattle, our nation’s only pan-Asian Pacific American museum and an affiliate of the Smithsonian Institution.   From Wing Luke it will go to the Richmond Center for Visual Arts, Western Michigan University, opening on October 21st.