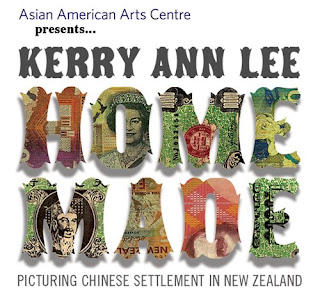 Since the first gold-seekers arrived in New Zealand in the 1860s, Chinese have been regarded as outsiders to discussions of national identity. The absence of a recognizable Chinatown in New Zealand has meant that many of the Chinese customs inherited from early Cantonese settlers are observed in private within the family home. This condition coupled with emerging research and exposure on the topic offers a chance to define Chinese spaces and author Chinese stories from within the local community.

Kerry Ann Lee is an artist, designer and educator based in Wellington, New Zealand. Her work: Home Made: Picturing Chinese Settlement in New Zealand celebrates an alternative cultural history through cut-paper, paint, found text and images. Mixed media collages, paper-cuttings and a lavishly illustrated artist book, explore both personal and local experiences of Chinese settlement in New Zealand, both the Chinese face behind the takeout counter and the home customs housed behind the plastic ribbon curtain.

This articulate and heartfelt body of work comprising of original collages, paper cuts, prints and installation work, toured as a national exhibition in New Zealand between August 2008 – March 2009 and gathered public attention with feature appearances on Asia Down Under and Saturday with Kim Hill. Paper-cuttings from the exhibition featured as a selected finalist work in the Wallace Art Awards 2008 at The New Dowse Art Museum. Kerry Ann will also be undertaking an artist residency at the Island6 Arts Centre in Shanghai in September 2009.

The talk will provide an overview of the project and expands the discussion on the Cantonese Diaspora to focus on the Chinese settlement in New Zealand.

A limited edition of the Home Made artist book will be available for purchase at the forum.

For the past several years, the Asian American Arts Centre has held a series of slide/art slams, allowing emerging artists the opportunity to present and talk about their work, meet and network with each other as well as with more established artists and critics/curators. Last year, the Centre hosted two slide slams, showcasing the work of nine artists working in various media.

Admission is FREE. EVERYONE is invited. This event is organized by Adliana Bahrin.

The ART SLAM Series is made possible in part with public funds from the New York State Council on the Arts, a state agency and from The New York Department of Cultural Affairs. The Asian American Arts Centre was founded in 1974 in New York City as a not-for-profit organization to address the distinctive concerns of Asian Americans in the United States. Its mission is to promote the preservation and creative vitality of Asian American cultural growth through the arts, and its historical and aesthetic linkage to other communities. 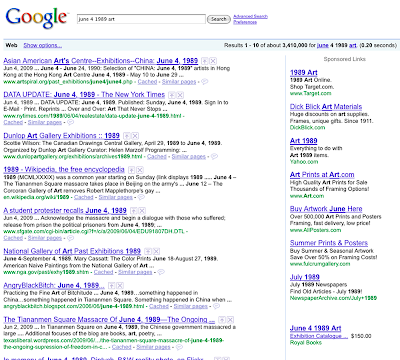 On June 5, 1989, in response to the massacre of the students in Tiananmen Square, the Asian American Arts Centre in NY initiated a year long exhibition that eventually brought over 300 artists to participate, drawing attention to this historic tragedy. After the exhibit traveled to several sites over the next few years and the calls to have it and the informative materials that accompanied it died away, the exhibition and the art work that it encompassed lay dormant. Now, on the occasion of the Twentieth Anniversary of the Tiananmen Square Student Movement this exhibition is being revised with this online exhibition for all to see. Much has passed and China may no longer be the China that it was. For this exhibition, this is not the issue. Tiananmen Square, however, must not be forgotten. So many artists came forward to give selflessly to this cause, creating innumerable memorable images...