Article from 1988 on Multiculturalism 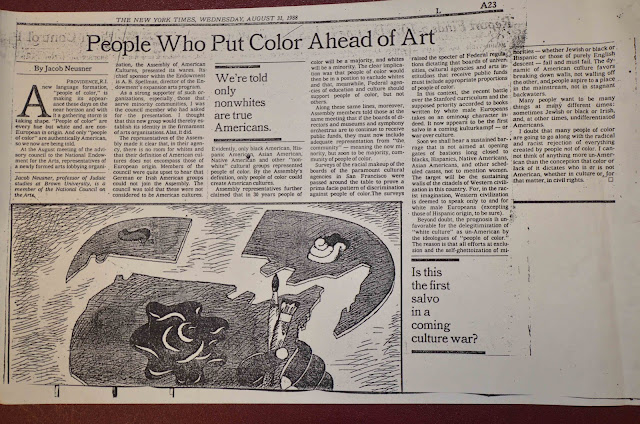 Looking back this article from the NYT in 1988 we can pause to remember the bad rap Multiculturalism got by the mainstream, and the unfortunate light it is being cast in today by those who want lead our communities with a different take.  This article came out during one of TAAC's (The Association of American Cultures - a coalition of Black, Latin, Native American & Asian American arts activists) national conferences, the first took place in 1985, demanding equity for the communities of people of color and the cultures they represented.  At a high point in its influence TAAC was close to NEA and received substantial support. This article came out then calling TAAC an assembly and several other disparaging names.  NEA responded, justifying their support of TAAC, and the era of multiculturalism continued for about twenty five years giving voice the perspective of people of color.  That the mainstream could gradually distort the message should come as no surprise. After all, the inequity that was practiced thirty years ago by funders and foundations has still not changed.  The message does need to be reshaped to reach the next generation.  However, in doing this, it might be better to build on what was achieved in the past rather than to reject what was done, along with terms like 'multiculturalism'.
You can still join TAAC today and lend support in building an effective stance.
Read more
Newer Posts Older Posts
Subscribe to: Posts ( Atom )