The Asian American Arts Centre and the Cultural Equity Group (CEG) will bring artists and members of CEG together to see art images and speak about a greater role for the art and culture of this city’s diverse neighborhoods and communities. This conversation brings to light what has been largely invisible in the underbelly of forgotten neighborhoods. CEG is a network of art organizations of color whose cultures represent many if not most of New York residents.

A bill for developing an equitable Comprehensive Cultural Plan for New York City passed into law recently. Thus equity is finally on the agenda of NYC. Now is the time for open public dialogue and to begin a process to understand what “equity” will mean for our neighborhoods, our city and our nation. 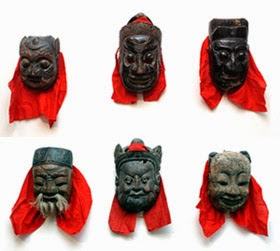 What is Nuo?
Nuo is a form of Chinese masked drama enacted by a priest or specially trained shamans as a means of exorcism; it is also a theatrical performance with a presentational aspect, and festival, with the idea of gathering to establish ties and norms between heaven and earth, life and death, man and gods, the ruler and his subjects, a very prominent Chinese cosmological concept.

The Nuo rituals have been deeply incorporated into Chinese living. It has also spread widely among people of various ethnicities throughout the ages. One can see many of the similarities to shamanistic practice that knowing the spirit world requires masks, dancing, motion, and theatrical or ceremonial set-up. Considered "spiritual tutors", professional Nuo performers are believed to be capable of wielding magic power to disperse evil demons, spirits, and pestilence. Besides training in ritual procedures and exorcism, the performers also have to be adept in the Nuo opera. The whole ritual procedure includes inviting, welcoming, and thanking spirits. Following the solemn ritual, the Nuo opera will be performed to entertain the spirits. And according to the Chinese folklore, a street parade of legendary generals and deities could best expel evil from the community. Nuo performers at the performing hall or in procession are often equipped with whips and dance in mysterious tunes. They also wear masks painted with black, white and red in various countenances -- some amiable and others ferocious and frightening. Stylistic features and characteristic of the masks vary widely and reveal much about the regions, cultures, and civilizations from which they come. Guizhou and Jiangxi area is famous for the greatest varieties of Nuo opera. Wherever there is a Nuo opera performance in an outlying village, farmers in surrounding villages will trek dozens of kilometers of hillside path to watch. Though some elderly folks still have awe and reverence for the Nuo dancing "gods", fewer now are familiar with the content and expertise of the ritual.

But with the passage of time and increasing popularization of scientific knowledge, the primitive superstitious ritual has now been transformed into a theatrical performance for entertainment and a genre of folk art. Formerly, the ritual gives expression to the uncertainty of early peoples towards the unknown world and universe, but nowadays the most fascinating part is the vivid Nuo opera that follows. The opera itself contains long-standing knowledge about religion, society and ethnic groups in the early stages of human society and provides an important reference for the in-depth study of music, dance and painting as well as other arts. Nuo ritual, considered to be one of the oldest forms of Chinese dancing, is not only a theatrical performance for entertainment in modern society, it is also a matrix of the Chinese arts. From these magical-looking facial coverings, the spectators can theorize on the mythology, art and ancestral view of their creators. The Nuo masks, as the major vehicles in the ritual to transmit gods’ power and benevolence to man, bear a potent, vivid testament of its link with Chinese ancient culture and its folk arts.

The origins and historical background of the Nuo mask ritual
In ancient China, there is a form of dance called Nuo. The Nuo ritual has been practiced in China for thousands of years from the primitive times when early men performed sacrifices and conducted ceremonial services to pay tribute to ancestors, gods, and goddesses while exorcising demons. Dancers used masks to perform at ritual ceremonies to frighten off the ghosts and evil spirits and to relieve people of epidemics. The origins of Nuo culture in Zhejiang province are one of the most ancient and can be traced back over four thousand years to the Liangzhu culture of the neolithic period. In Liangzhu’s ancient sites in Yuhang county large numbers of engraved Taotiedesigns on jade have been discovered and are considered the most ancient and the only source of the designs on Nuo masks. Major Nuo rituals in the courts were documented in the classic "The Book of Rites" which mentioned "the golden four eyes", a reference to the metallic masks performing in the Nuo ritual. Today the Nuo exorcising ritual is best known to be carried on yearly in an outlying villages of ethnic Tujia people at the base of Fanjing Mountain and in southwest China's Guizhou and Jiangxi provinces.

In some districts, the Nuo ritualistic dance later developed into a theatrical and formal performance. A story relates that during the North Qi Period (550-557), Lanling King was too handsome to terrorize the enemy even though he was excelled in martial arts. He began to wear a ferocious-looking mask on the battlefields in order to overwhelm the enemy. This story was later brought onto the stage in South-North (420-589) and Sui-Tang dynasties (618-907), which is known as "The Lanling King" The masks used by the performers in ritual ceremonies and in the performing art had a strong bearing on the origination of the facial make-up in the Chinese operatic performances. In Tang dynasty, masks still were used in low comedy, but started to dye the masks in portrayal of super-human beings. In Ming dynasty (1318-1644), roles among actors divided into more classifications, and operas and facial make-up were gradually standardized. During the Qing time, with the rise of Peking opera, the art of facial make-up became increasingly perfected. Toward the end of Qing dynasty, the facial make-up became finalized. It is also believed that the Nuo mask has its direct historical and stylistic connection with other foreign mask rituals in Japan, Korea, Taiwan, Thailand, Nepal, India, Tibet, and Mongolia as well as Sri Lanka.

Nuo ritual, dances, and plays have always flourished in the Chinese cultural areas, right up to the present day, and in olden times performances took place virtually every month. It later spread widely among people of various ethnicities in the Yangze River valley, the Yellow River valley, and also the secluded southwestern region. It is important to note that while Sichuan, the believed birth place of Chinese Nuo dance, is in the northern cultural zone, it is in the southern religious and spiritual centers that Nuo culture continues to exist and be preserved until today. 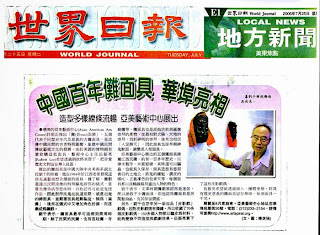