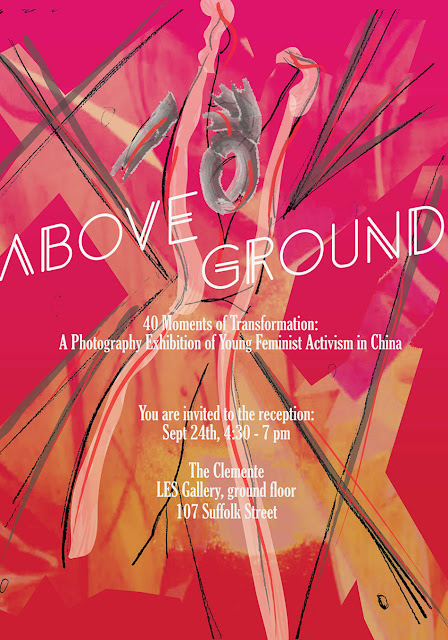 A photography exhibition of young feminist activism in China

We are thrilled to announce "Aboveground—40 Moments of Transformation", a photography exhibition of young feminist activism and the struggle for gender equality in China. Co-hosted by China Rights in Action, Feminist Task Force, and Asian American Arts Centre, the opening reception will take place on Thursday, September 24, from 5-7 pm. Guest speakers will begin at 5pm.

Feminism calls for freedom from restrictive gender roles and for gender equality in the realization of social, cultural, economic and political rights. "Aboveground—40 Moments of Transformation" documents young Chinese activists' impressive efforts to combat stigma, discrimination, and violence against women in pursuit of these ideals. These activists use public spaces as their battlefront to gain visibility and spark open dialogue. But, in China’s repressive environment, bringing the fight for gender equality above ground comes at great personal risk. This exhibition frames and explores the determination with which these young feminists are pushing for a China with true gender equality.

In 1995, 189 governments came together in China and adopted the Beijing Declaration and Platform for Action. These documents were a remarkable milestone, committing to a vision for women and girls of equal rights, freedom, and opportunities in all spheres of society and of lives free from want, fear, and violence. Two decades later, ironically, feminists and lawyers in China who fight for such equal rights are subjected to search, harassment, and even detention. On March 7, 2015, the Chinese government detained five women activists on the eve of International Women’s Rights Day for their efforts to call attention to sexual harassment. The women received an outpouring of support from feminists, women’s groups, human right organizations, and politicians around the world. But dark clouds are still gathering inside China. Although “The Feminist Five” were released after 37 days, it was conditioned on a strict form of bail that limits their movement, associations, and speech, and they are still treated as criminal suspects by Chinese police.

On September 27, UN Women and China are co-hosting a “Global Leaders’ Meeting on Gender Equality and Women’s Empowerment: A Commitment to Action.” China’s President, Xi Jinping, will give the opening remarks and chair the first part of the meeting at the UN. While this political gesture will be welcomed by some global audiences as a sign of China’s progress, in reality, women’s rights in China will remain in peril as long as those who fight for them face violence and persecution.