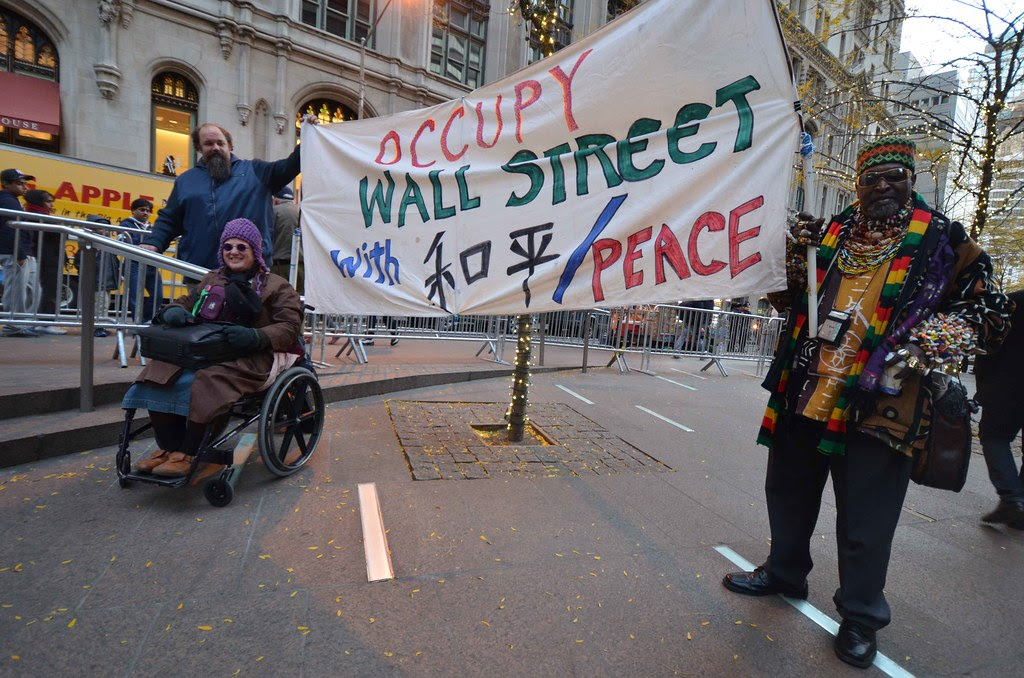 The last time that "Occupy Wall Street With Peace" banner was held, on December 3rd. Every Saturday at 2:00 for about five to six weeks, this banner was a site for the development of an Asian presence at Zucotti Park. This was the last time the banner was present there. The woman in the wheelchair is from West Virginia and she traveled to New York City to visit her friend (in blue). She sang me two Irish songs—which were so lovely and truly showed how spontaneous she was—one of her songs was both very funny and highly political. She was quite a woman.  Keeping the banner there has enabled me to meet so many amazing people. It has been quite an experience and also a privilege. 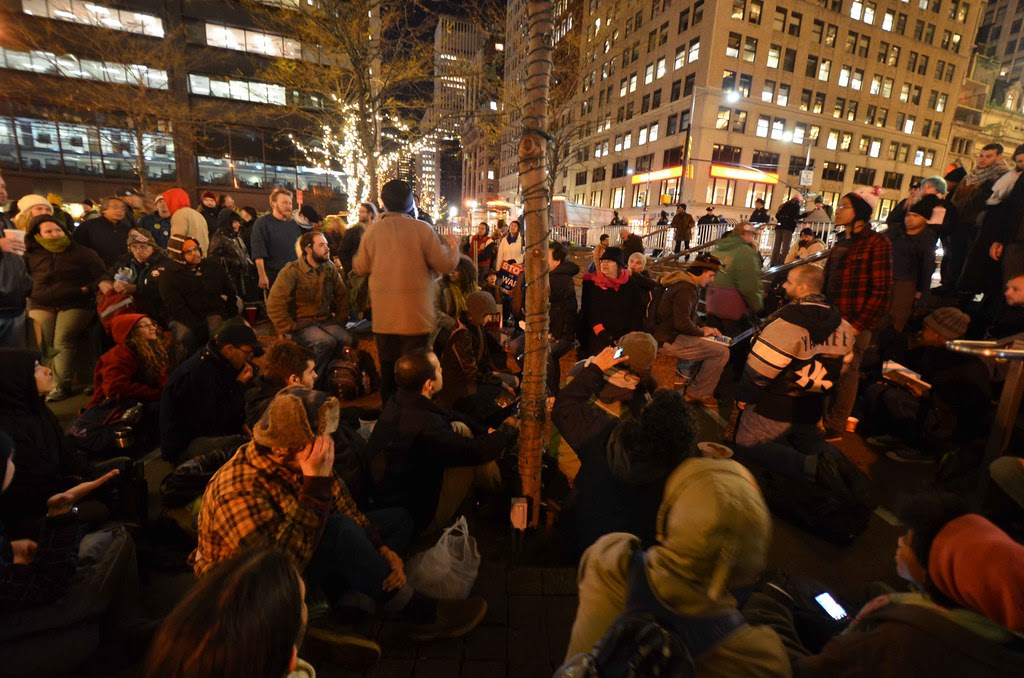 General Assembly held in Zuccotti park on December 1st. This is an example of the general assembly, usually held in the park. Some meetings have better attendance than others. 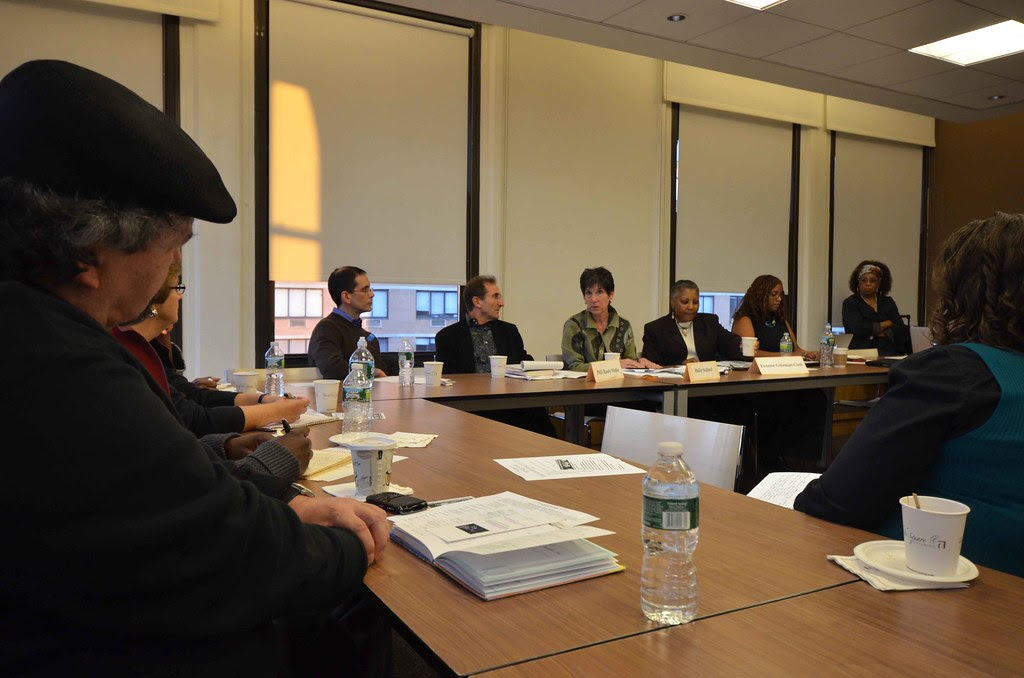 The Cultural Equity Roundtable was held on December 2nd. This is the third Roundtable that has been held in conjunction with the Tisch School of Performing Arts. It is organized by the Cultural Equity Group, specifically by the Caribbean Cultural Center run by Marta Vega and MOCADA (Museum of the Diaspora of African American). The issue at hand is the fate of cultural organizations and communities of color, given that funding is being severely cut and most of these organizations are at a transition point in their leadership. With these diverse communities growing rapidly, how can we reverse this process?
Sidford had recently published a study about the funding of such organizations, documenting patterns showing that such funding in the United States has been derelict in supporting organizations of color. These patterns are not new, but this is the first time that it has been documented and individuals must now formally address the ways in which the country will maintain the cultural well-being of the country.
There were two other speakers present. 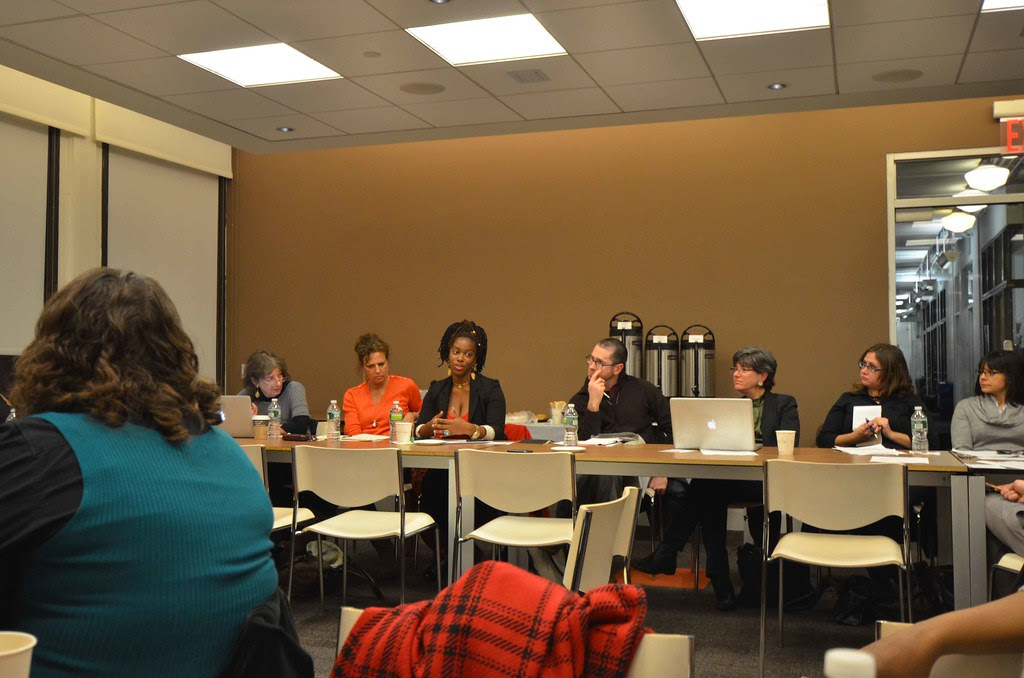 There were some people from foundations that attended—but left early. 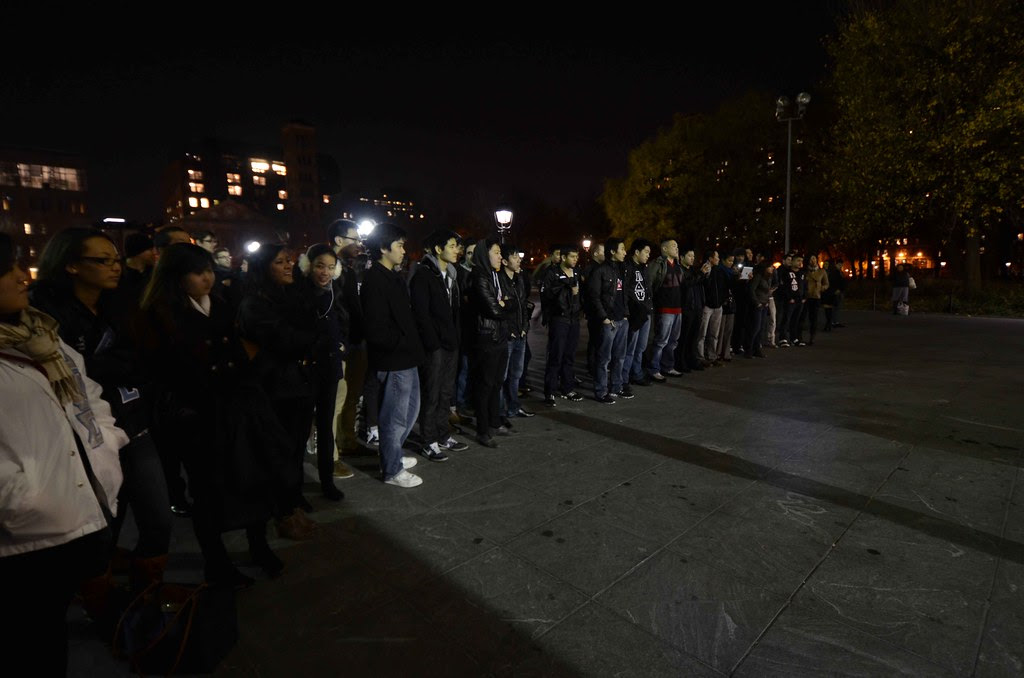 Frat initiation at New York University on December 2nd. I bumped into this accidently, but since the new pledges were going to show respect to the organizations present, I offered up “Asian American Arts Centre” and after a few minutes, they declared a statement of respect. 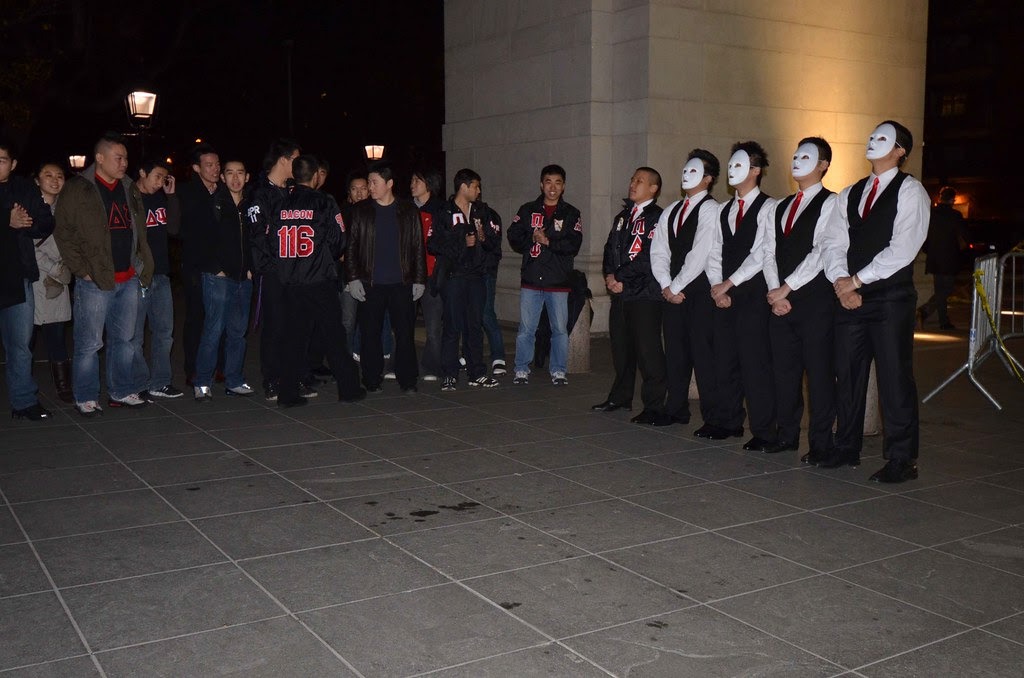 Frat initiation at New York University, wearing masks. The pledge class was repeating the names of various organizations in the crowd. 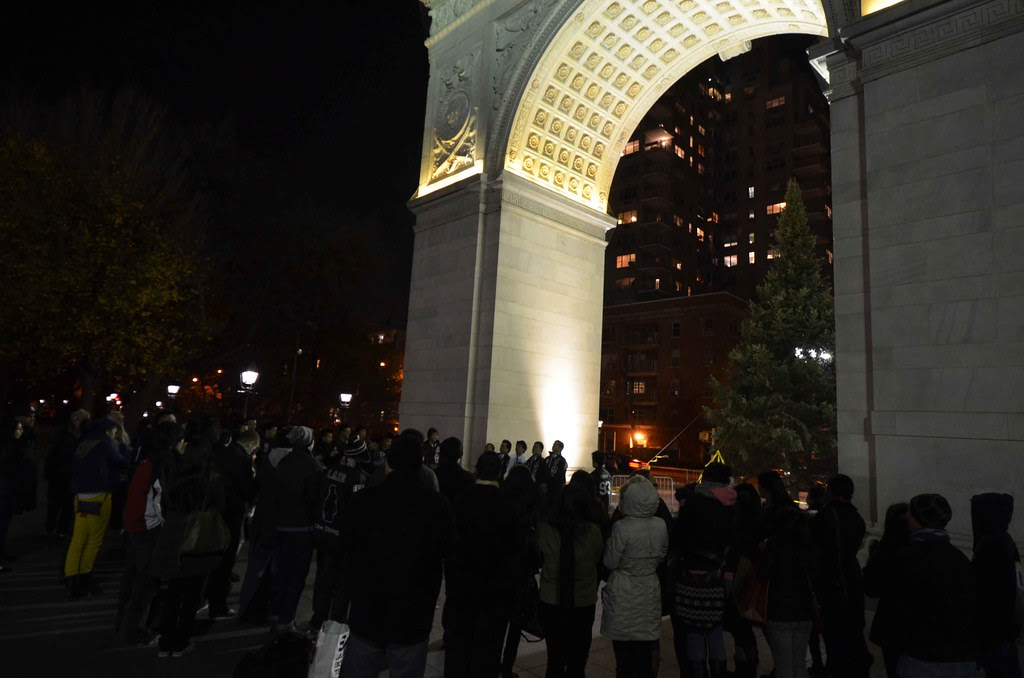 Another picture of the initiation at NYU. 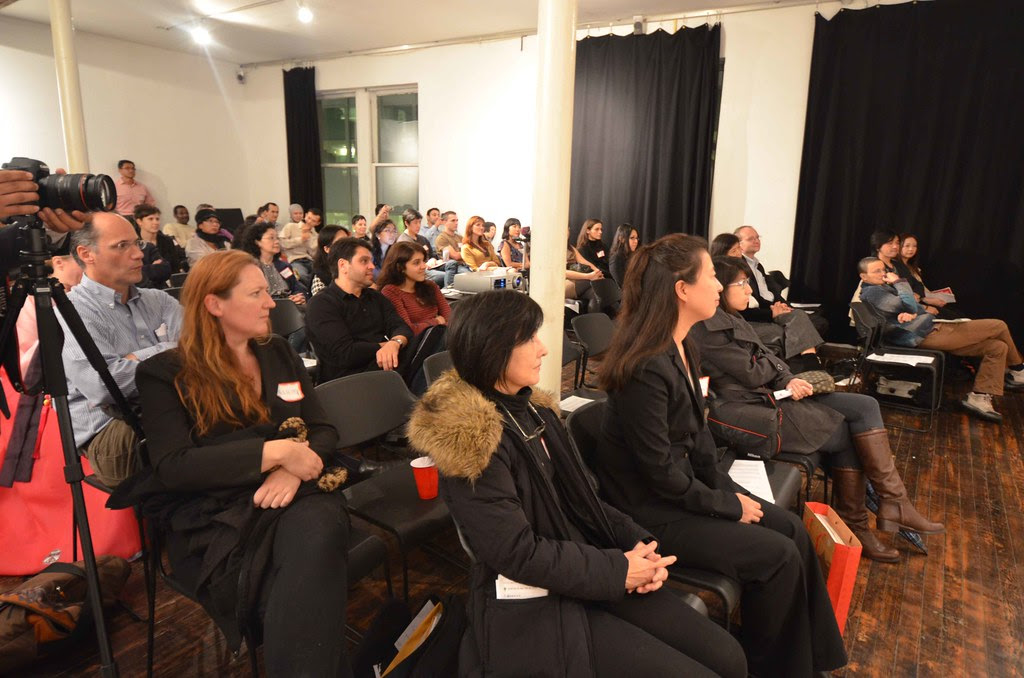 Alliance in town hall at December 6th.This is the Asian American Arts Alliance which was held at 16 Beaver St. These are called monthly town halls and are often well attended. They are opportunities to learn about what’s going on culturally in the Asian American community. 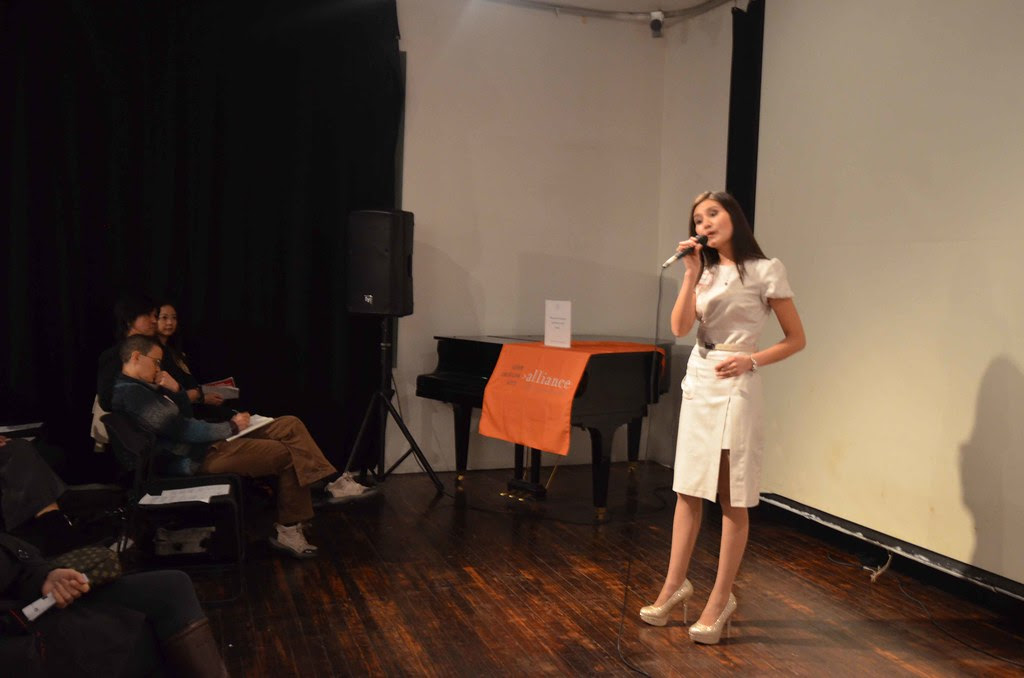 This was a special alliance event where a group from Kazakhstan were presented. This country is actually home to the largest Korean population outside of Korea, having been placed there by Stalin. Some were advanced students in the arts who were visiting NY, or researchers involved with the UN. One of them happened to be a singer who performed for the audience. She had an amazing voice (melodic, national identity). 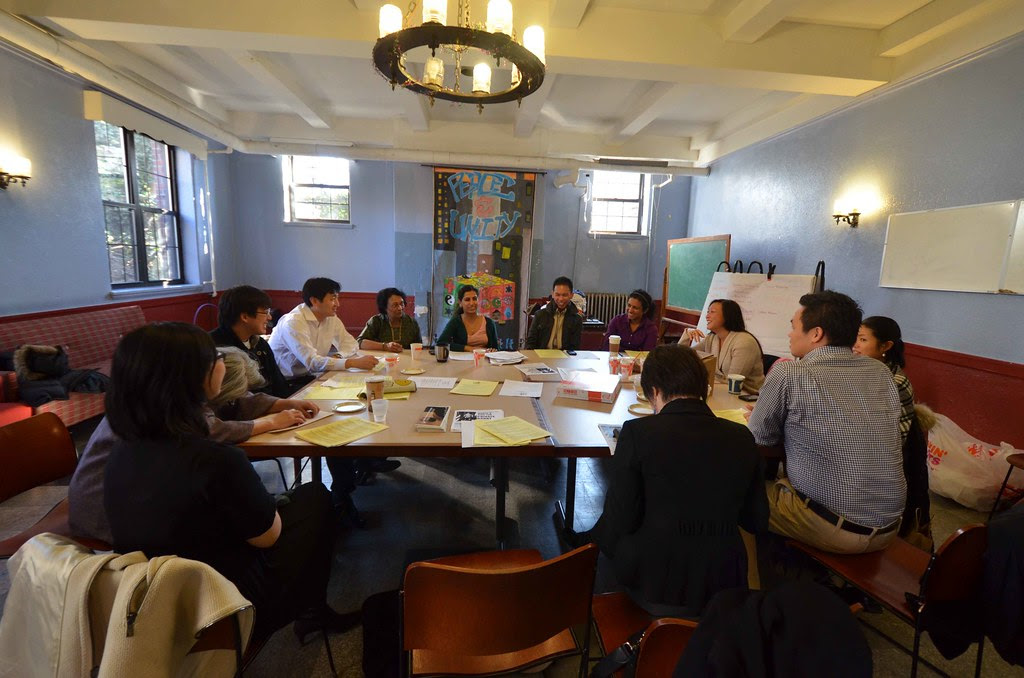 Meeting on December 8th. This meeting is called “13% and Growing,” a meeting of social coalitions in NYC who have been fighting for the last twenty years to increase funding for social services to Asian American communities. Last year, after an extensive and well-organized campaign advocating with the city council and NYC legislature, they achieved remarkable change, from less than 1% to over 2%. However, this increase still represents a small fraction of the total US dollar for New York state. This is also a new strategy that does not simply increase funding for the elderly or for healthcare, but is also an ethnic strategy that declares that this certain ethnic group needs certain services to be effective. Therefore, advocating as Asians has become an accepted modality. I am placing this information and these images here because this coalition is now accepting and embracing the presence of art education into their ranks, recognizing that arte education for kids has an impact on the social well-being and the social services themselves for Asian Americans—Asian American art organizations that need funding for their programs can now join and become a member of 13% and Growing and get access to those special funding streams that they have identified. Please contact AAAC so that we can inform you of the next meeting and how you can join and become part of this expansion of available resources to Asian Americans. 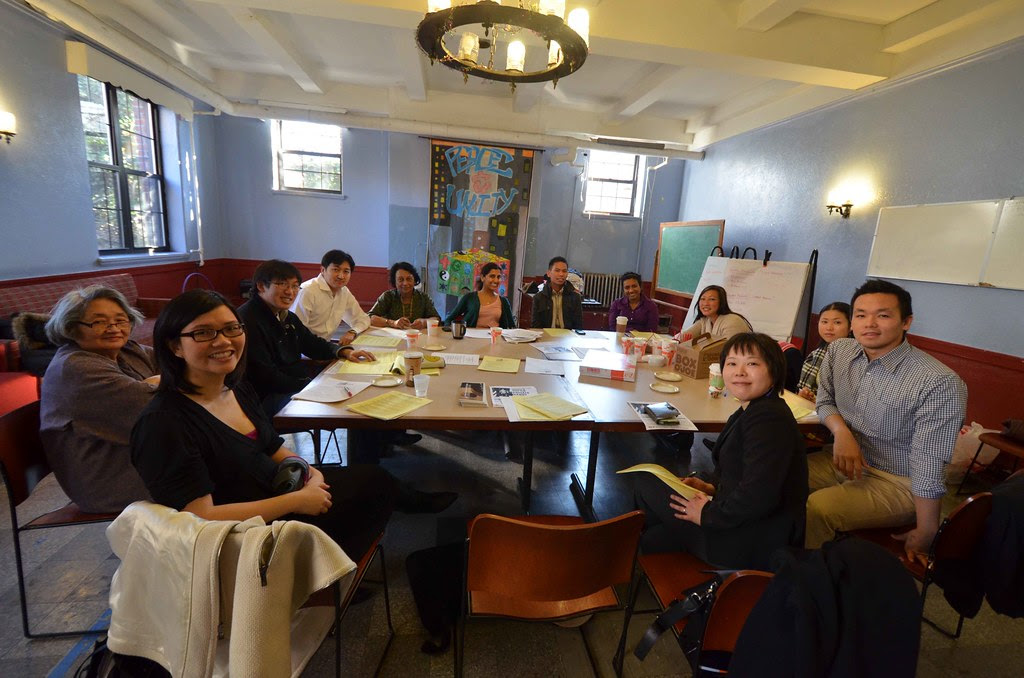 The meeting is growing. All the members here agreed to turn around and say hello! When you join, know that you are joining a group of friends. 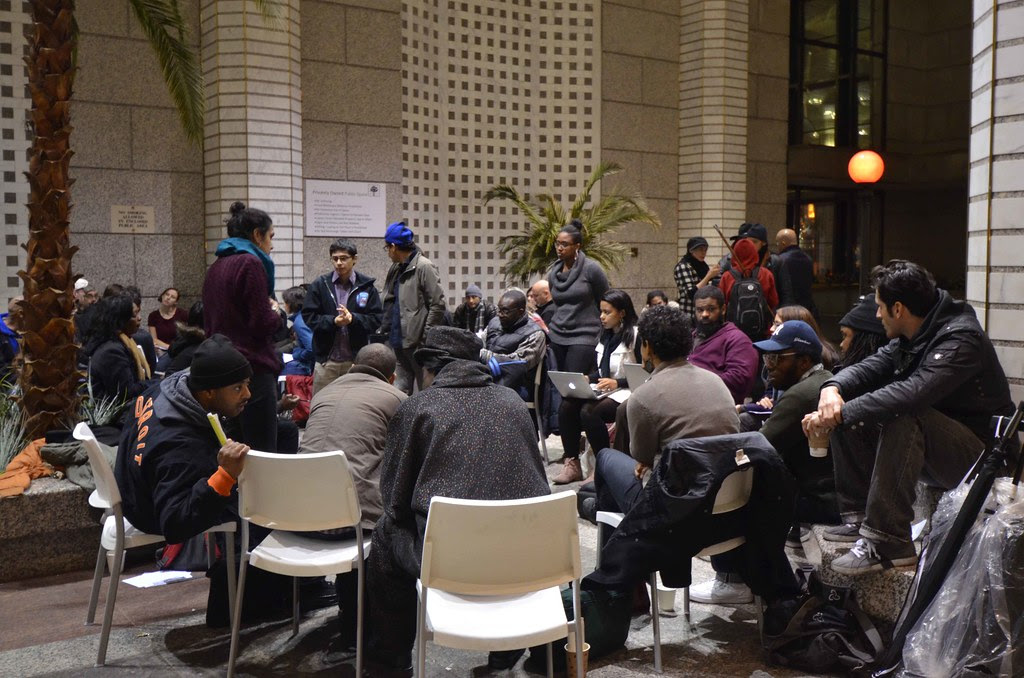 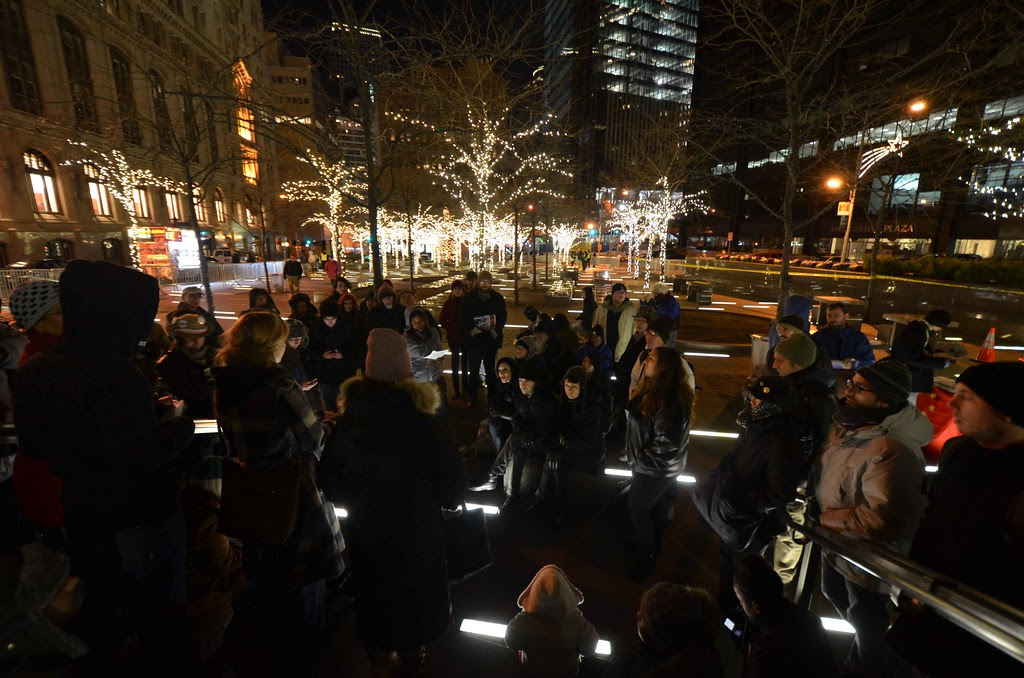 At the General Assembly meeting where the march for Danny Chen was approved. It was a cold night and much had to be done before this proposal could be presented at the GA. Requests and forms had to be filled out and sent to the facilitation group. Additionally, this paperwork had to be written in a certain way in order to be accepted and the requests had to be very clear in terms of budgeting. Once all this was done and the process was expedited, we came to the GA asking for a march for Private Danny Chen. The proposal for the march ultimately received financial and emotional support of the majority of the GA in honor of Private Danny Chen.