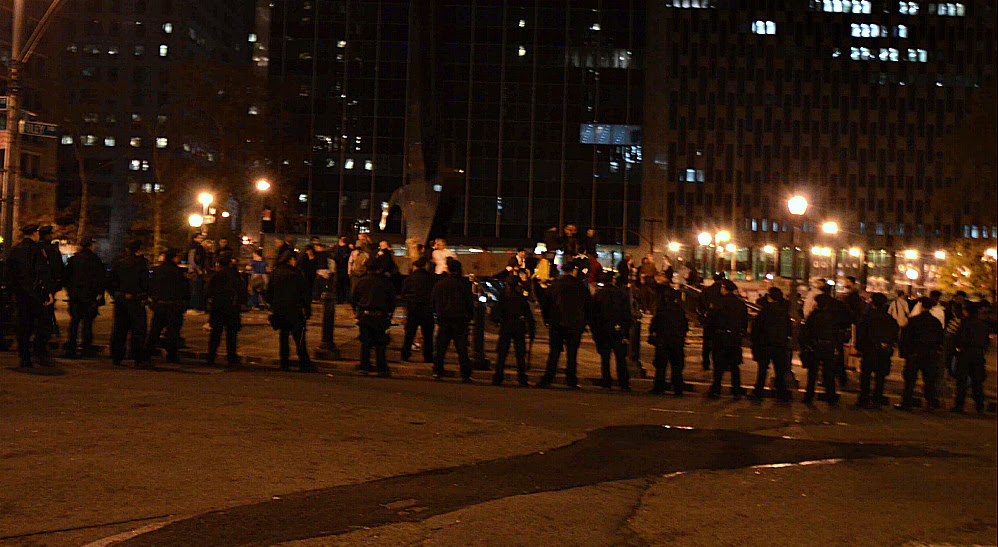 Protestors were forced to leave Foley Square on the night of November 15th.
I received a text message at around 1:15 saying that it’s an emergency and that the park was being raided by the police. Living in Chinatown, I did not know what to do. It took me a while to come to my senses and e-mail the press and anyone I could to let them know this was happening.  I finally got out of the house around an hour afterwards and biked down Worth St. and immediately saw that it was blocked around Centre St by a squadron of about twenty-five police vans, their red lights all on as if an extraterrestial had landed. I turned around and went and went another route to get into Foley Square, only to see that a lot of people had been marched from Zucotti to Foley Square. By the time I took this picture,a  lot of people had been led away and only the cops had been standing there. From here, I tried to get closer to the park. 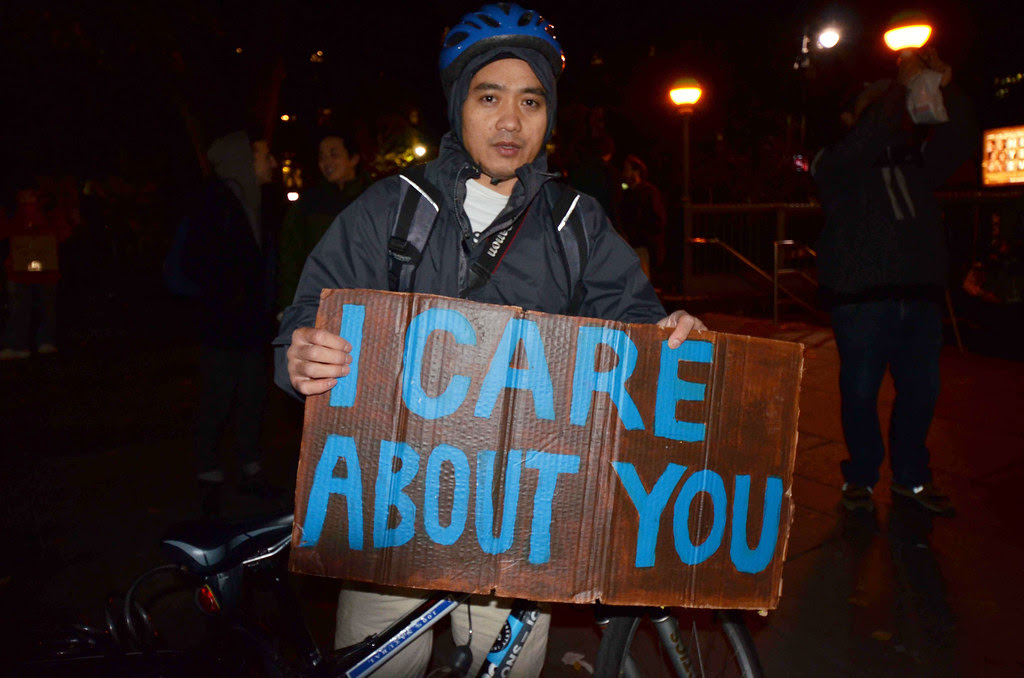 Here is a sign that is the favorite of Naomi Klein, who mentioned this when she was interviewed on WNYC by Brian Laer (?). It is because of this and other indicators that she realized that this is not simply another movement, but something much more fundamental than that—recognizing and seeing the shift in culture that is taking place.
Having taken pictures of many signs during many evenings over many days, I finally came across this one. It was created by an Asian American— a Filipino fireman who lives in Brooklyn. This phrase is written on both sides of his poster and he carries it around on his bicycle. It struck me that a) he’s an Asian American and b) that he’s a fireman, a member of a team that sacrificed so much ten years ago. 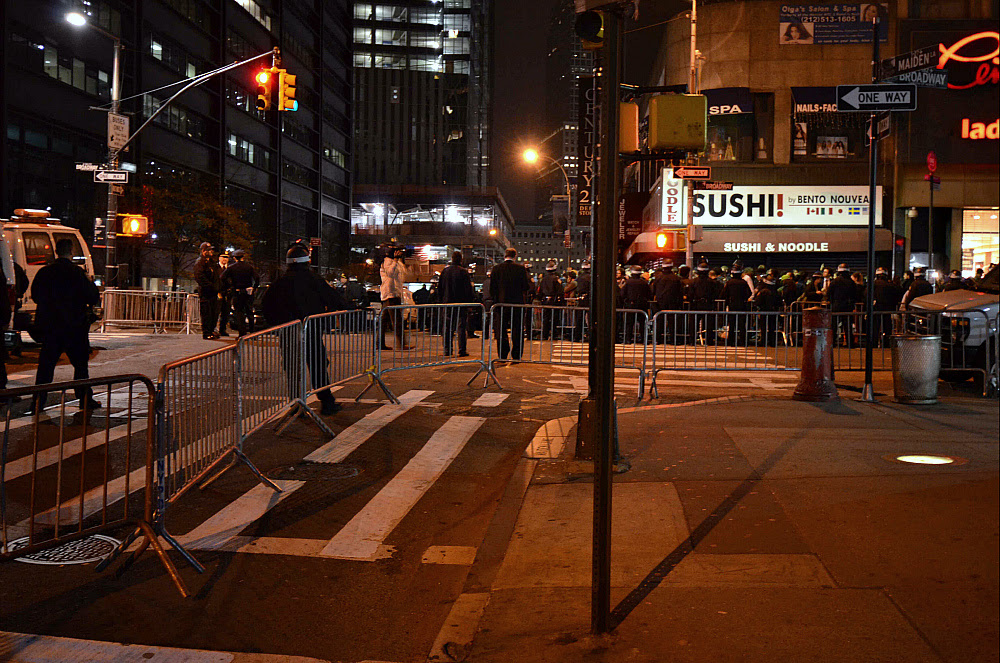 These OWS demonstrators had been cornered by the police and were shouting slogans every once in a while. It was pretty hard to get anywhere near this whole area. 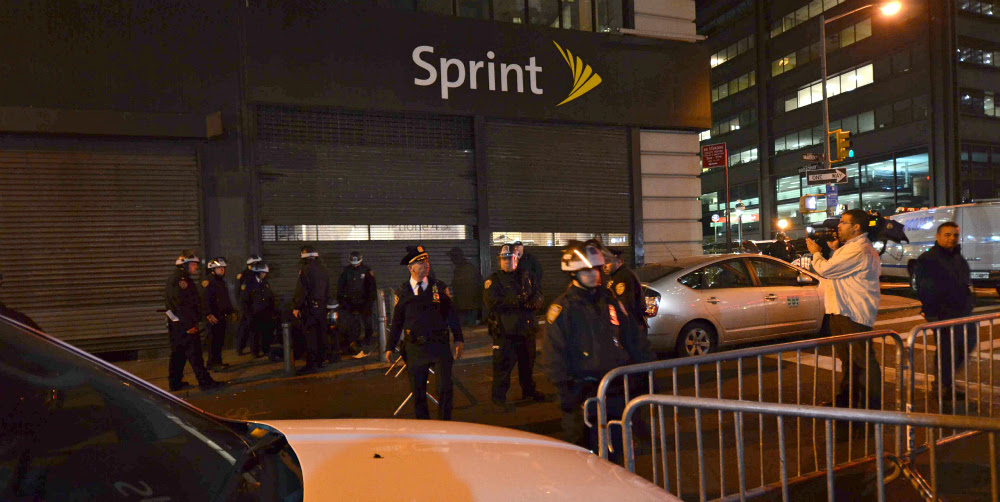 On one of the corners where there were very few people and no one could get over there because it was blocked, suddenly this guy standing across the street from me gets jumped on by about six cops. It was so sudden. To me, it didn’t seem like he did anything to deserve this kind of reaction. But still, they beat him repeatedly: clearly a police tactic to outnumber people with physical violence. This is why I have given a new name to our mayor: Onionhead. Onionhead was a gang leader on Pell St, of the Flying Dragons, who had acted in the same way, turning his minions on innocent people. 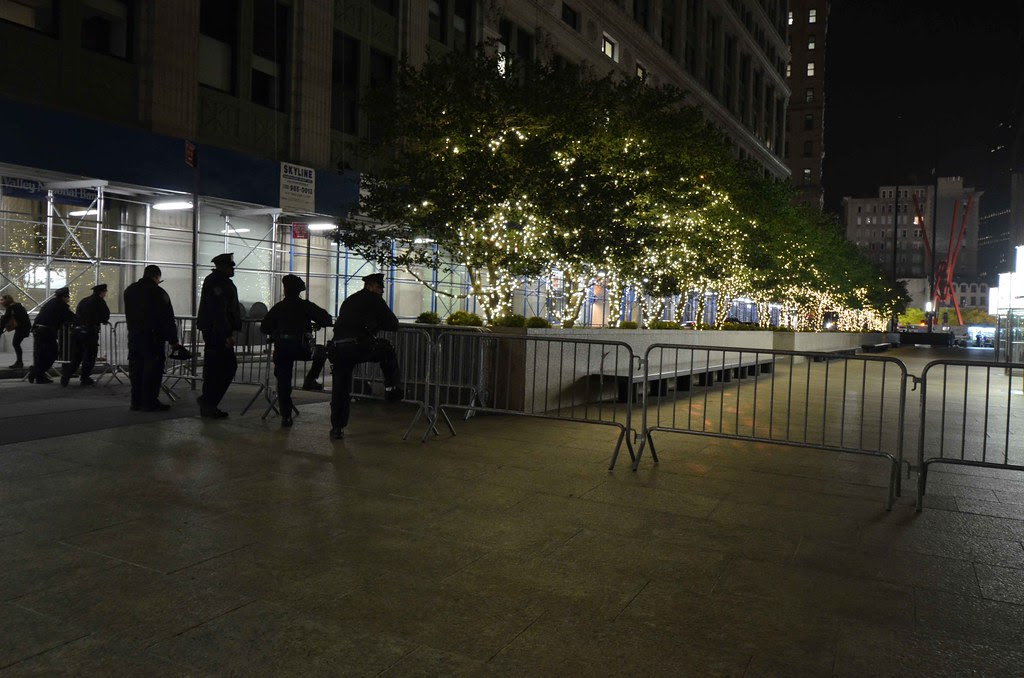 Biking around, this picture is the closest I could get to Zuccotti Park. I had heard later that evening that there were people who had chained themselves to the kitchen at the center of the park and were still there. But of course, we could not see what the police did. We know now that a lot of books and personal belonging were immediately piled up and put into dumpsters and trucks, contrary to statements that say that they were given plenty of time to collect their belongings and evacuate. When I got the text message at 1:15 in the morning, they had already been shouting to people to leave immediately, and those who had obeyed were not allowed to go back inside to gather their belongings. The extensive library that we had there was trashed. The whole strategy was to use violence and destruction against the people who have tried to maintain a peaceful, non-violent stance. These were the orders of Onionhead, our mayor—the 1%. 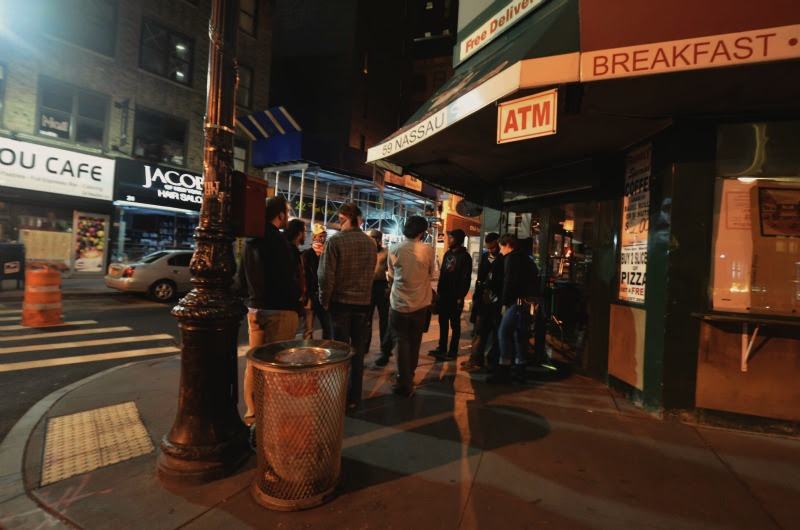 I finally came upon some of the organizers of OWS who were trying to decide their next plan of action. They asked me to go down to Battery Park, where they expected some of the OWS protestors to have gone to recoup. 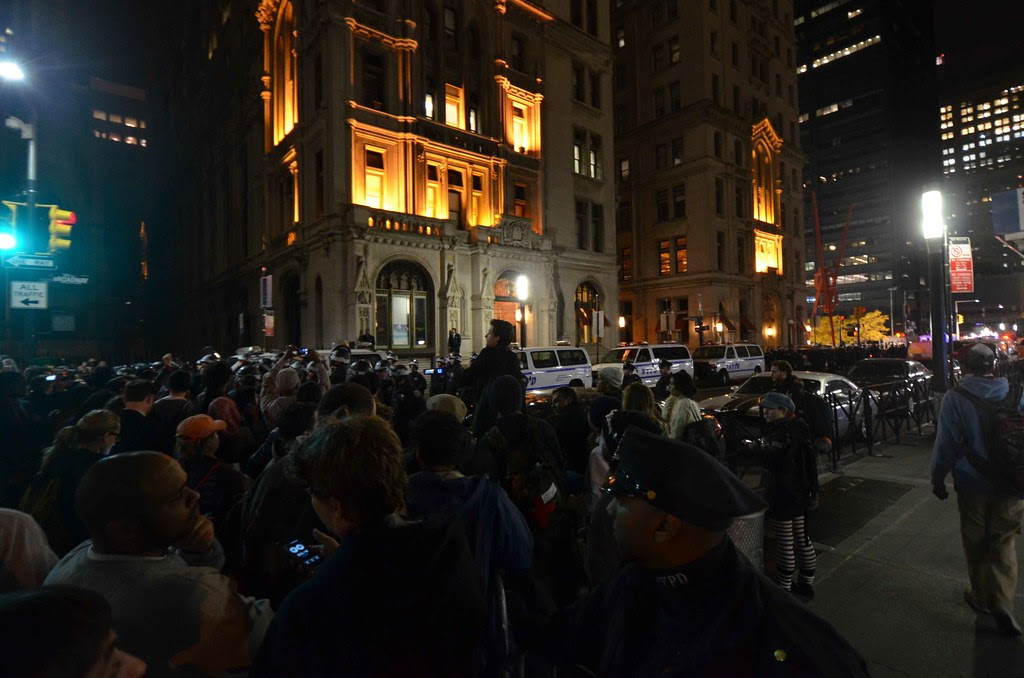 This is the next closest location I could get to the park, where a lot of people were confronted by a line of police. We couldn’t get any closer than this. There were many “green hats” (legal observers) there, but legal observers that I know personally say that they were not exempt from police brutality. 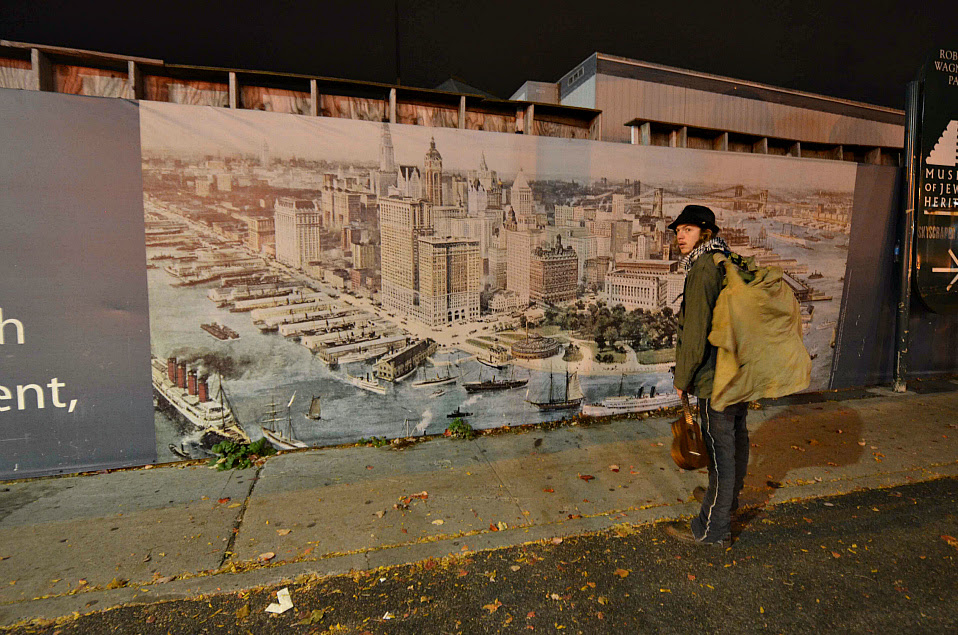 Biking down to Battery  Park and finding some campers. Those committed occupiers who really stay in the park and occupy it every evening—some of them began to arrive. This was about 4:00 AM. 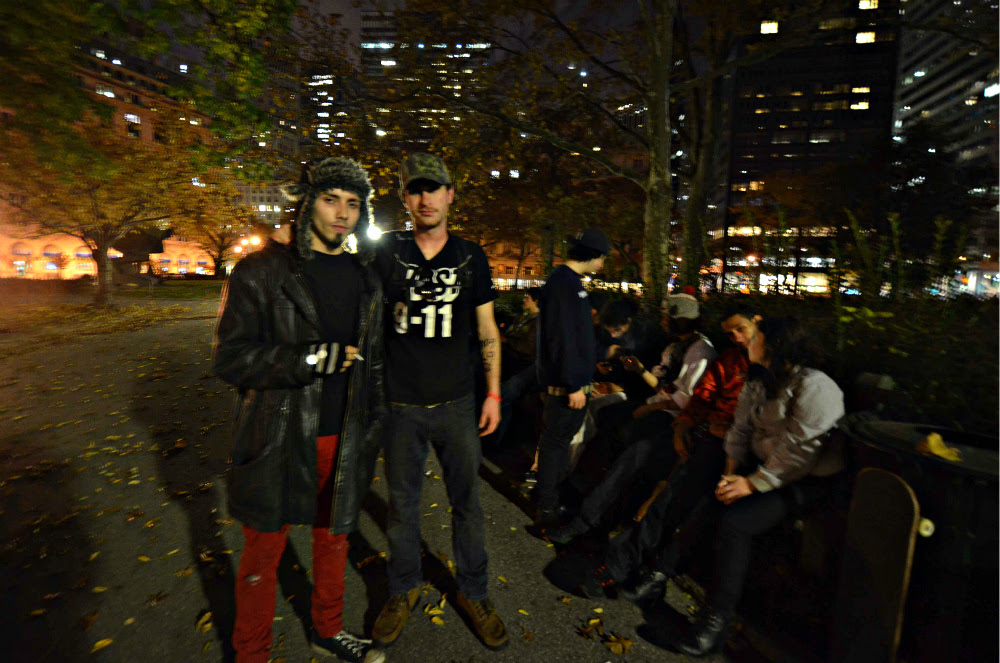 After a while, they decided on where they would begin to gather in the park and stay unobtrusive. Clearly, they were tired and exhausted, having gone through great turmoil. Many had lost a great deal. Though they might have expected that this would happen, they were still clearly in shock. Some of them asked me to take their pictures. 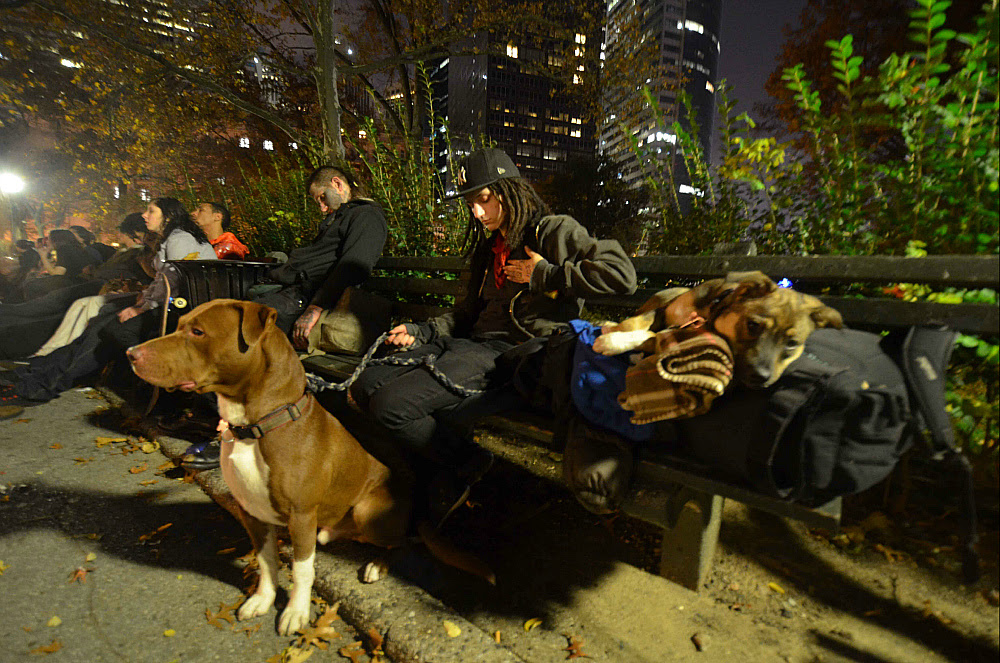 One person had escaped with her two dogs. Many of them clearly wanted to sleep, but in the park, they could only sit and wait. Luckily, it was not that cold that night. 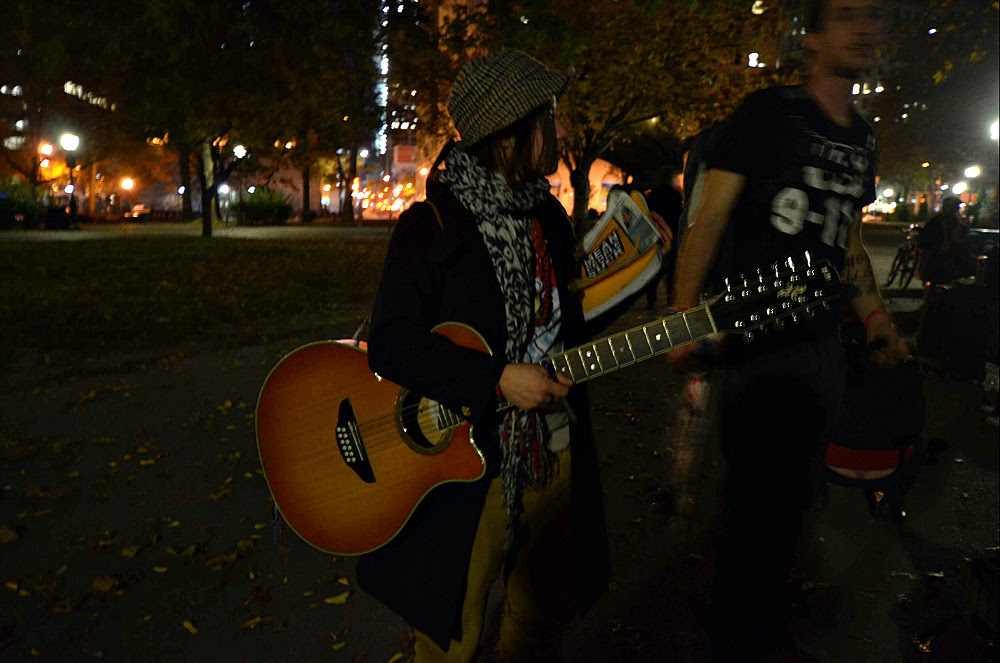 Some were able to retrieve valuable items, such as this beautiful guitar. But no one was in the mood to play music. 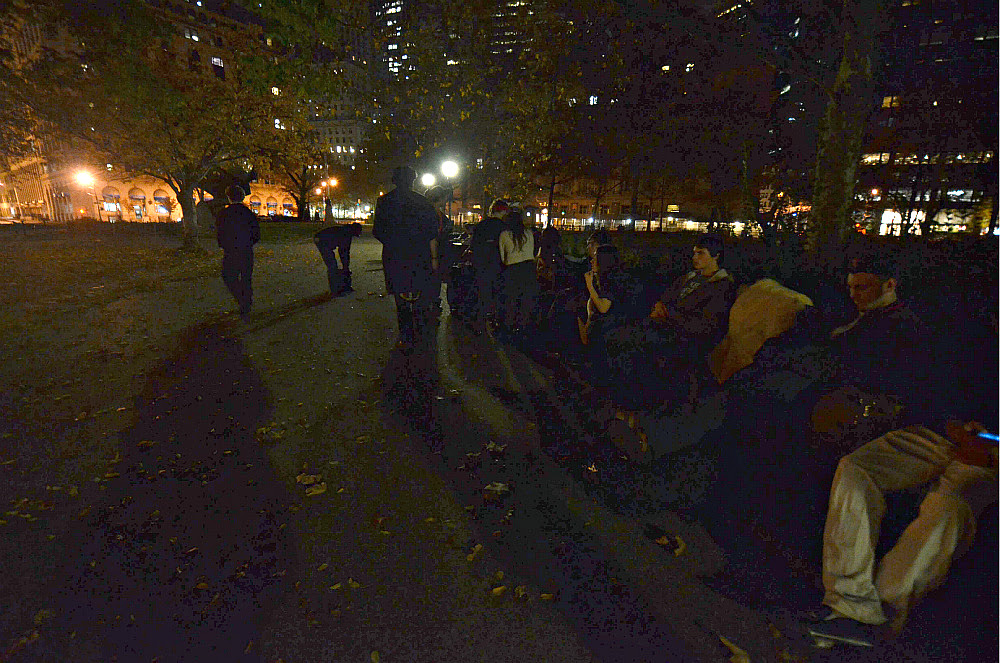 Yes, the night was filled with shadows. 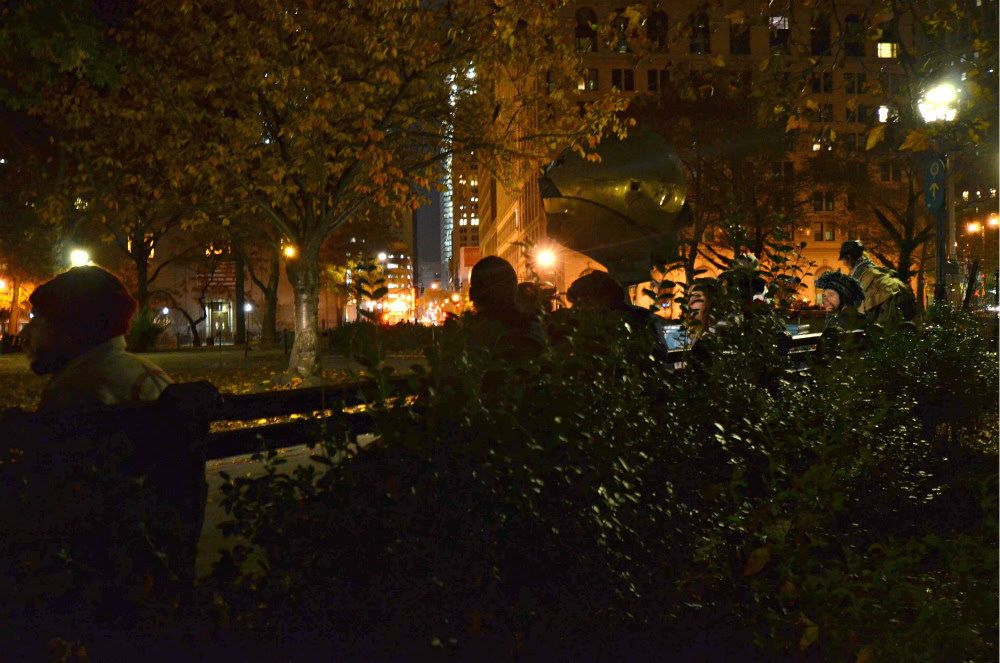 They had chosen a place to gather—oddly, near the sculpture that was recovered from the World Trade Center plaza. 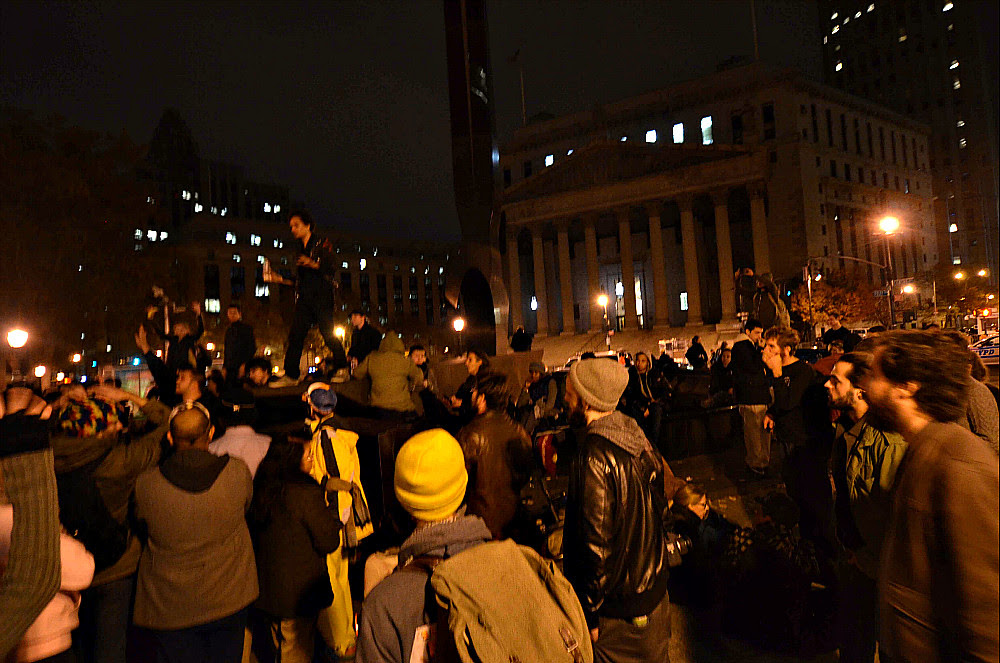 After leaving Battery Park, I found that most people had gathered in Foley Square and were conducting a GA on the spot. The police threatened to evict them and refused to let them stay there. There was other talk and texting about a gathering near Canal St, where a church had apparently opened its doors. At the very last minute, the police offered a compromise and allowed us to stay at Foley Square. 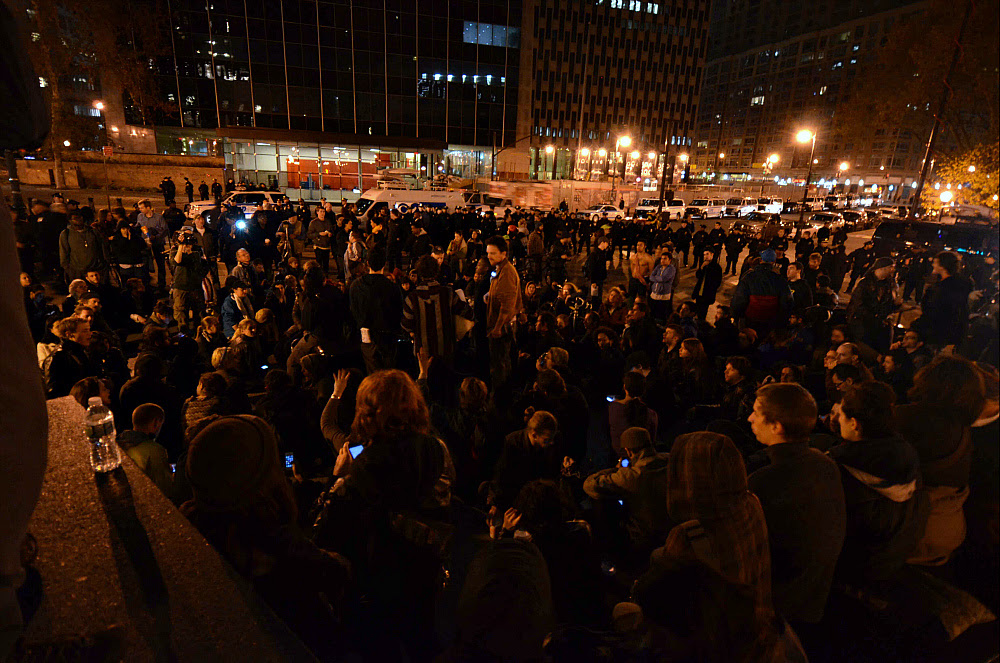 Just before dawn, I left and returned home. I was woken up around noon by a Chinatown news reporter asking me all kinds of questions. She asked me if I was optimistic about the future of OWS. That night on PBS, there was a program on the true history of Abraham Lincoln by (HARVARD PROF). It showed that Lincoln had fallen off his pedestal as the Great Emancipator after having realized that he had only evolved a conviction about freeing the slaves through the process of a very bloody civil war, not having had this conviction before the war actually started. The man that we all so greatly admire, whose words and visage are symbols of national pride—this was all forged in the crucible of the deaths of so many people, brothers, and families. When this reporter asked me (in my stupor) whether I was optimistic, and realizing the forces that we had ideally decided to confront, and understanding the power that was arrayed against us—financial, political, police, and military powers—and the willingness of these elites to use everything they have to protect their self-interests, I could not help but mumble out my anguish of having seen what I had saw that night as a predictor of what was to come. Any gains will be made in struggle. 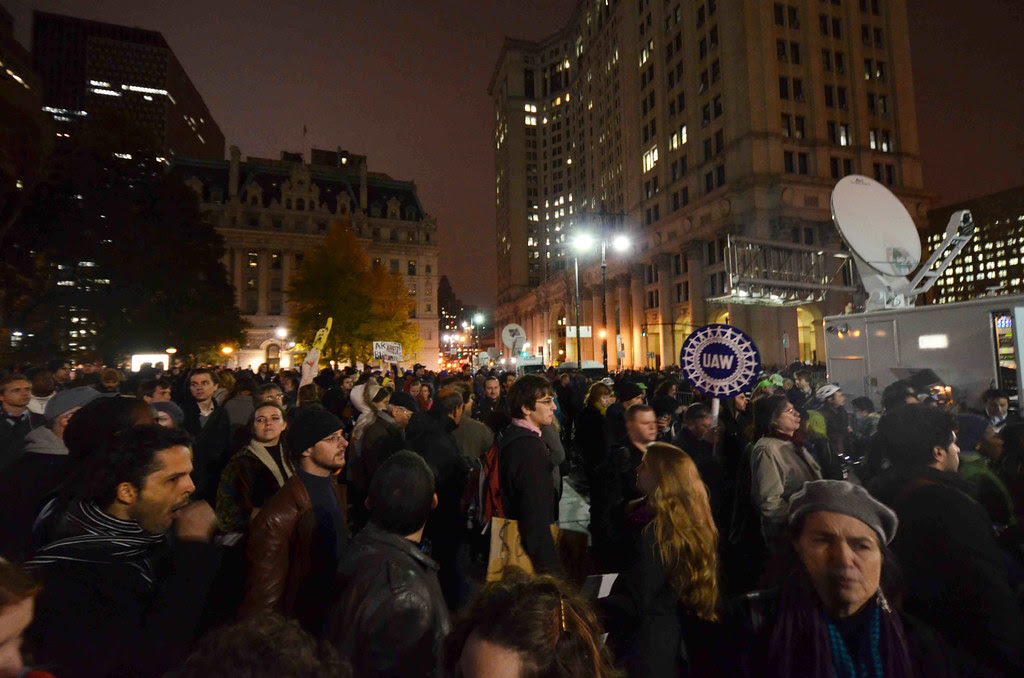 View by the Municipal Building during the March across Brooklyn Bridge.  On the night of November 17th. This march took place two days before Zucotti Park was raided. There were around 20,000 people at this march. 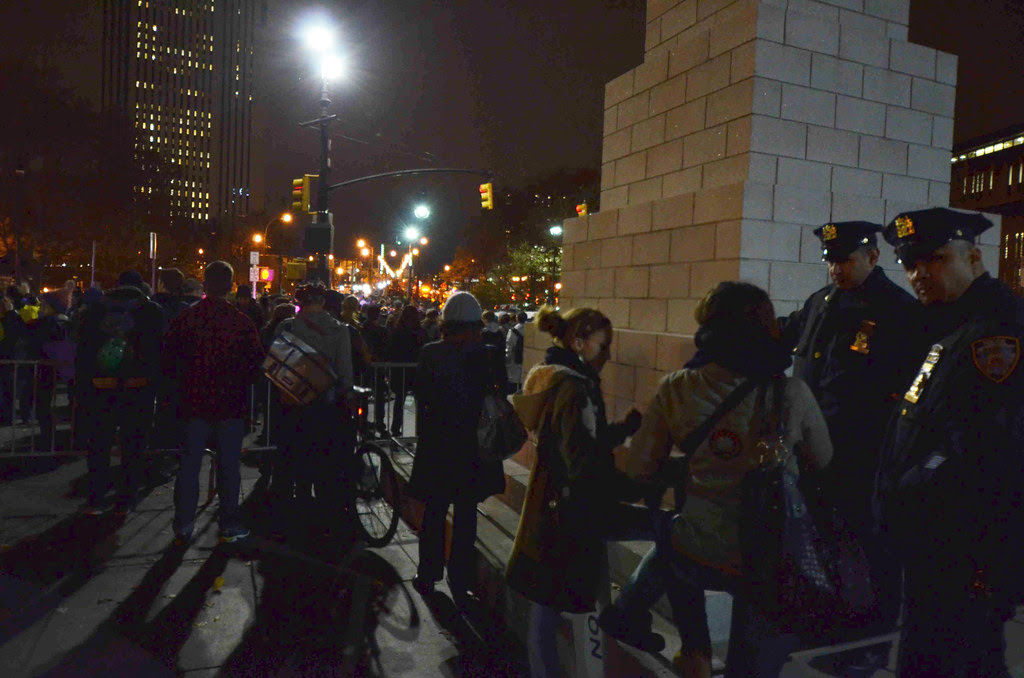 The NYPD and demonstrators can interact peacefully, while other pictures on this website shows that the police force can be a sort of gang which may injure, beat, and insult people—particularly on the night of the 15th. 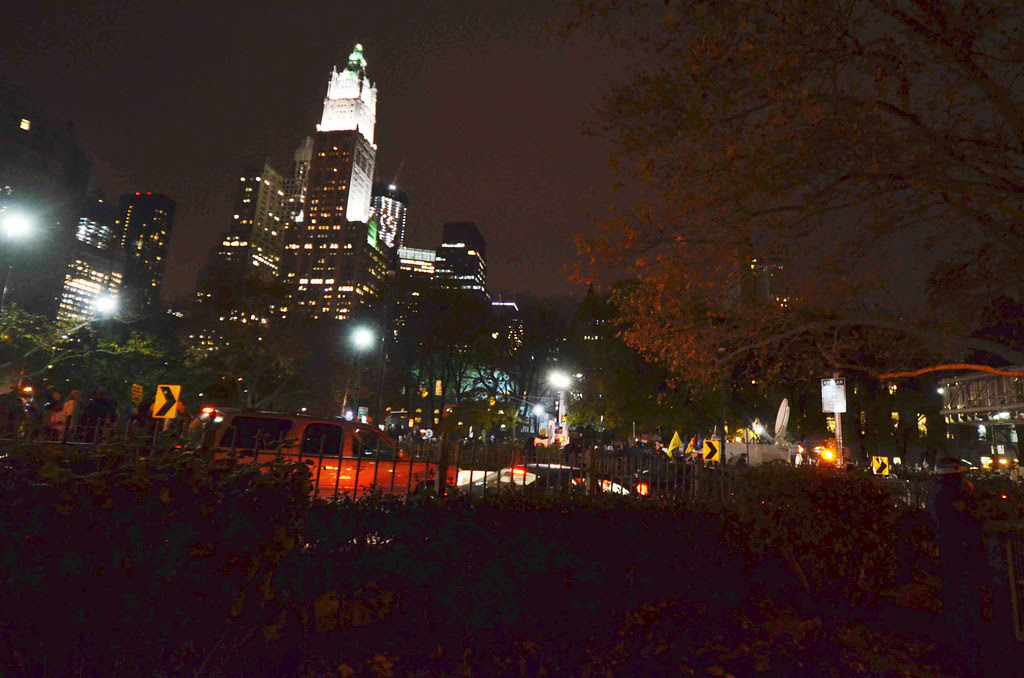 If you can blow up this picture, you can see the crowds of people walking across the bridge.
Photos and captions by Robert Lee
Tagged