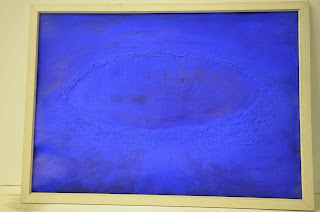 Toshio Sasaki, who was a finalist for the design of the World Trade Centre's Memorial for 9/11, and the only artist in the competition, loved this blue color.  It can be seen in many of his later works as well as here in this beautiful print.  Miyo Sasaki maintains his studio and supports artists from Japan to have their studio within their premises.  On Oct 14, 2012 during an open studio event I got to visit them on Garfield Place in Bklyn. 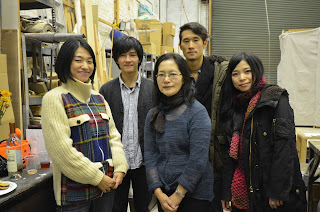 In the center is Miyo. She is flanked starting on the left by Sayoko Tanaka, Ohno Shu, Sequiyah Aono, and Reina Kubota - all young artists. 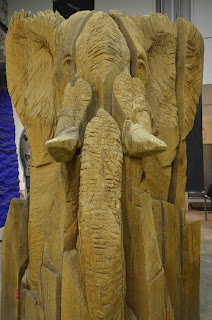 This sculpture of an elephant by Toshio is life size. 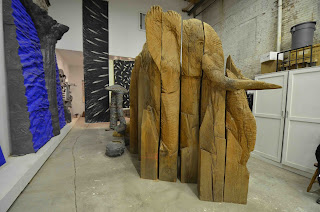 A monumental sculptor, you can see from this view of his studio some of the other art works that are still on display, and in fact available. 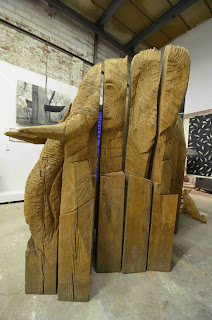 In this view behind the elephant, is a photo of a piece Toshio was famous for, the vessel/boat embedded into a concrete wall between two trees. 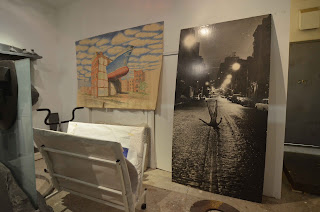 In the back room of the studio are many of his smaller works including drawings, plans, and photographs.  Here you can see how the vessel embedded into a wall evolved into a ship embedded in a building.  One of the first works he created upon arriving in the US was this photo on the right, a self portrait with his head in a manhole in the middle of a NYC street late at night.  Nude - this is a signature piece that he used for later pieces.  You can just catch a glimpse of the round manhole cover on the floor in front of the photo that he had cast for this performance piece.  The hole in the center is large enough for his head to fit and support his shoulders. 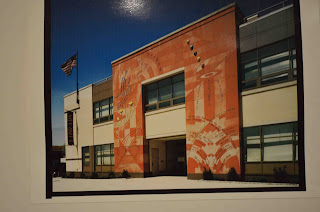 This was Toshio's last completed public art work, the facade of a new library in Long Island City, before he passed away in 2007.  His design for the WTC memorial can be seen on its online site. 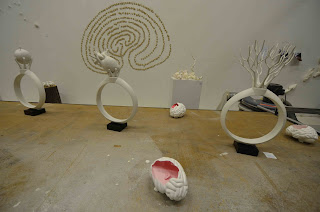 These are art pieces by Reina Kubota 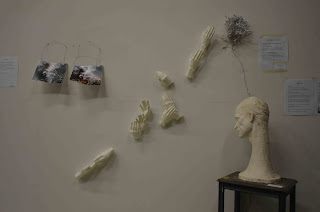 These works are by Sayoko Tanaka 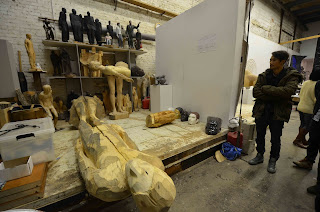 Sequoyah Aona likes to carve directly in wood, some in larger than life size scale 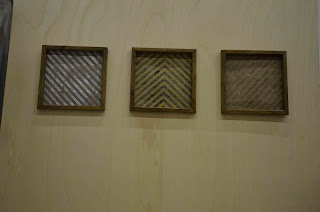 These are new works by Ohno Shu, somewhat different from the works he did in Japan 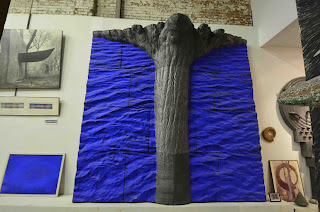 Toshio liked to lay lead sheeting over wood carving, hammering them to mold and mirror the carving beneath.  He later painted the sea's waves with his favorite blue pigment.  The tree with the roots into the sky he left so the lead can be seen.  This is truely a monumental work, a key Asian American art work.  Some institution, perhaps an Asian American institution should acquire it before it is grabbed up by an overseas collector.  It would be a shame if this were not available to the American, particularly the Asian American public. 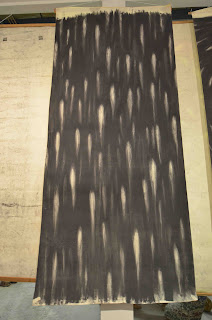 Here are some charcoal drawings that Miyo recently found.  This is the first time they have been exhibited. 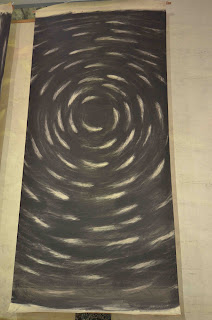 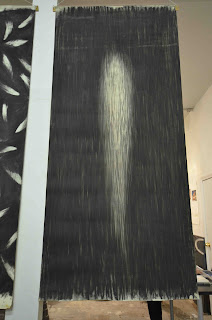 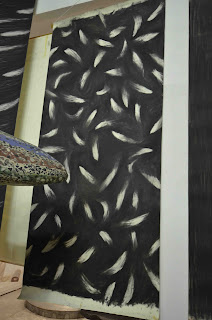 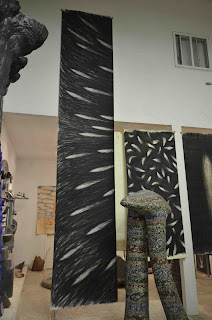 This charcoal drawing is very long 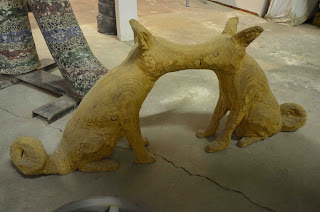 Here is a sculpture I had never seen and had never known this playful streak in Toshio's work. 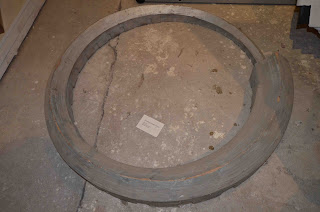 This wood sculpture takes the form of a another monumental work that was made of steel, rising to the sky.  In a well known photo, it rests on the land with the night skyline of NYC behind it.  Here the piece takes the form of a house with a typical roof top, only very long, long enough to curve back on itself as it shrinks and becomes its tail - the form of an 'Ouroboros'.  On the side you can just make out the lines of the windows and doors. I understand the steel piece no longer exists.  The survival of important Asian American art is a fact.