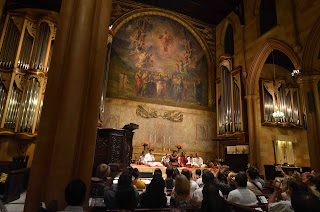 The start of the Locating the Sacred occurred on Sept 12 in the Church of the Asension on 5th Ave and 10th St.  A remarkable scene with crowds filling the church. At last, an Asian American event that reached mainstream audiences. 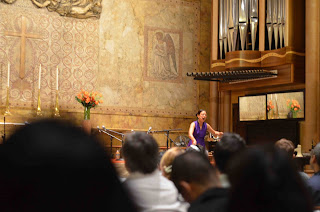 Bora Yoon's performance was mystical. Her voice and variety of musical instruments evoked the frame of mind of wonder and timeless queries well suited for such a vast space and the contemplation of the sacred. 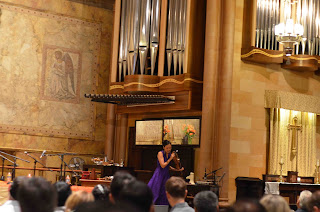 The question of the cosmic rings through to the bones and thus the sacred is touched in space, perhaps an unlikely context for many- the sense of space.  The timing may be just right to raise this when the pull to conservatism and the search for justice and equity need common ground. 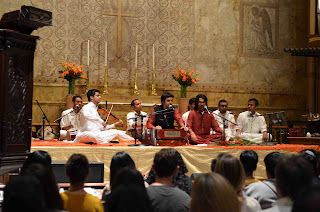 The performance group from Texas, Riyaaz Qawwali, filled the space with deeply rhythmic enthralling music, chants of Sufi style from South Asia.  Long into the evening they played, at times with the audience dancing in the isles.  The power of Asian music is rarely given such a platform to enchant NYkers as they may not experience except on traveling to Asia. 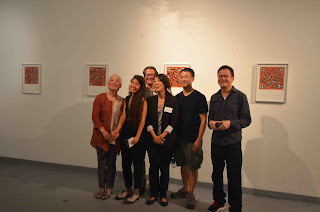 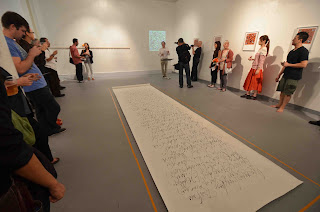 Clemente Soto Velez Cultural Center on Suffolk St just above Delancey was the site of the exhibition entitled the Space Within. Unusual in that all the artists are young or recently starting out, innovating the traditions of Asian forms with new technology, contemporary manners and formats, or brush work based in urban experience.  Here the artists pose together. 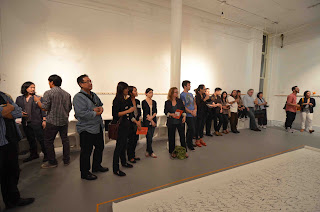 It was good to see so many Asian Americans in a mixed audience in CSV.  With digitally coded patterns on the wall, prayers and wishes on orange slips like dowels protruding from a long strip of wood, as if you could hang your coat from them, a map to Deep Splendor for various locations around the city, and calligraphic English that nearly filled the floor, this was an update on tradition, done with a sincere quest to bring Asian sensibility into the New York scene. 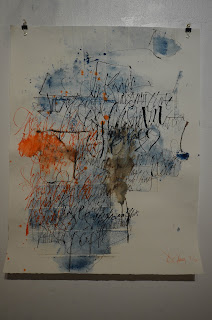 David Chang for example takes the premises and ideas of calligraphy and does not feel intimidated by the written language of Chinese.  He and perhaps his generation is free to adapt the art to his context and his world. 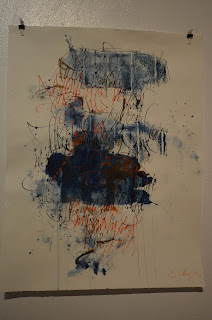 Its an Asian mind set that he returns to. Difficulties that were so formidable to previous generations come easy to him 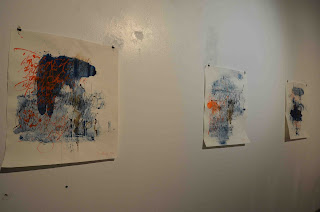 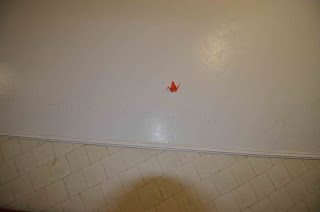 He decided to interview people on the street who were walking around the newly rennovated CSV building, ask them questions, or tape their conversations. He then took portions of their statements, some quite frank, and wrote them on the walls as you climb to the second or forth floors, giving a sense of the community that surrounds this newly minted cultural complex and its three performance spaces, galleries and artists studios.  This was not the only example of calligraphy in the stairway.  A large piece, perhaps thirty feet in length hung down to the ground floor entrance way.  The spirit of calligraphy endures. Can you read it on the wall just below the paper crane? 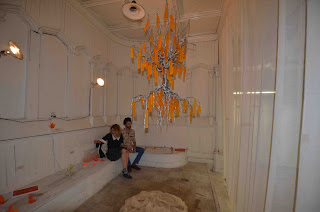 Jennie Chien's Meditations Under the Blessing Tree was on the fourth floor in a space all its own. Like a small stage area with a long bench all around, made more intimate by the curtain or veil hanging as an entrance passage, the tree of blessings was made of coiling metal hanging in mid-air.  These proverb like sayings could not be taken, unlike the ones downstairs in the gallery. 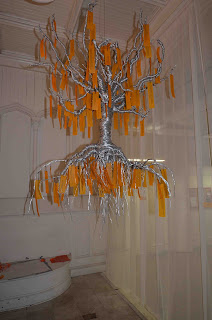 I recall another artist had taken a cutting from the Bodhi Tree where Siddhartha had sat and became enlightened.  He planted it at another location I think in Japan and its grown into a full tree already. The desire to perpetuate such ancient, or should I say timeless motifs realized in material form should be likened perhaps to grass pushing up between the pavement cracks.  Rational science cannot it seems eliminate a frame of mind blessed, if not sacred. 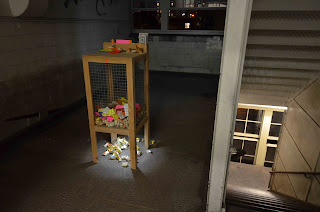 Also on the forth floor Jennie Chien made a place where wishes and blessings could be written. 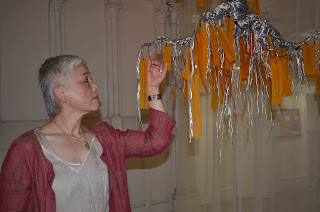 Thanks Jennie for this simple and lovely gesture. 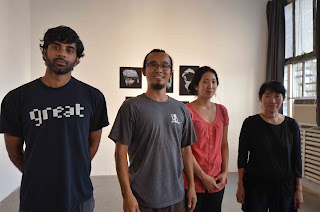 At another location in Brooklyn called NARS an exhibition opened on Sept 15, 2012 called Interpreting Rituals: The Butterfly Effect.  Curated by Eunyoung Choi and housed at NARS Foundation where a hundred artists have their studios.  Eunyoung selected these young artists, carrying the theme, even arranging performance events like tea ceremonies, to ensure the exhibitions consistency  with the many other events arranged in locations city-wide by the Alliance. 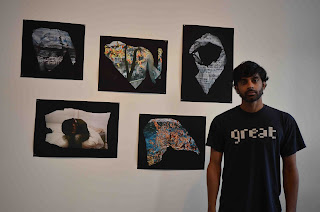 Gautam Kansara is lucking to have an ongoing conversation with his mother about their family, sometimes occurring internationally by phone.  Not an ordinary conversation, he tapes them, they range widely, and sometimes they can get pretty deep.  These are the subject of his art, photographs, sometimes of various outdoor scenes, that he manipulates into random shapes, moving the emulsion in ways that the scene can still be made out, but the borders of the image are quite varied, as can be seen here.  In one image sits his mother curled up weeping.  For some unknown reason she touched on a memory in their conversations that was quite vivid, hitting a nerve that brought it to life, with staying power that lasted, I understand for quite some time.  In this family context, I wonder, for us, if in the eternity of time, there is a spasm that quakes within a wish. 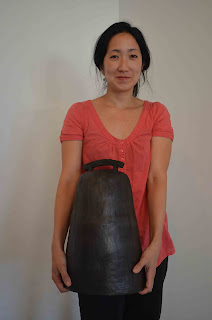 Veronica Frenning, I hope I got her name right, carries one of her bells.  As you can see quite thick and heavy. Unusual for her, her work is normally quite delicate, incredibly delicate such that many dont last. Paper thin, or even a slip dipped with paper.  Slip is a kind of coat of clay in very liquid form.  For this exhibition however, she proposed an elaborate installation that would have filled the whole room.  Given the limitation of funds, the essence remains.  There were no knockers so we could not hear them.  Veronica's mom is an art historian but she assures me that did not influence her decision to turn back to art. 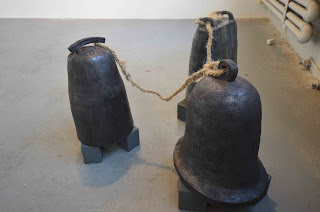 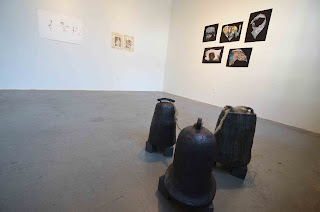 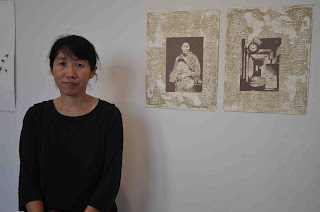 Yasuya Tanaka's work is the chosen illustration in the program booklet of the Locating the Sacred Series.  There it may be more visible the map of the world her cranes rest on.  Each crane marks a place of trama in the world, perhaps ecological, perhaps military. Special papers are used, some hand made.  I recall reading off the wing of one tiny crane newspaper lettering, legible was the word 'Egypt'.  Next to her here is an image of her mother. 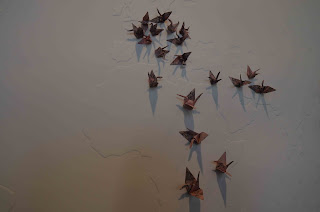 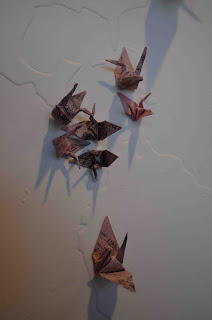 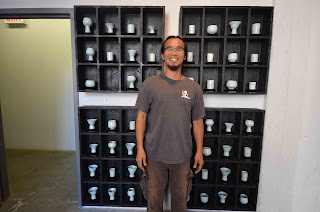 Eric K Yue is a potter.  Formerly a lawyer, he is quite convincing and thrilled to find his true calling.  Aside from his lovely cups he had a large plate there that was quite stunning, but you'll have to see that for yourself.  I've always considered working in clay and the mess that is made, to be quite spiritual. 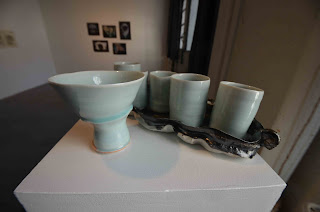 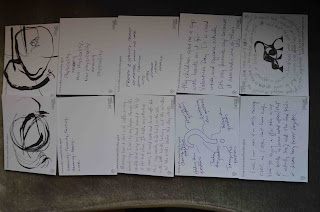 On these slips of paper is written on the top 'Form is the vessel of the Spirit'. Beneath people get to write or draw.  Sometimes about cups, about one of Eric's cups, sometimes about profound philosophical conclusions. Others touch on serendipity, all are as fragile and fugitive as the paper their written on.  I thought this a great introduction to art, to life, and yes, to the sacred. He has a pie he collected. Maybe he'll publish them and make them imperishable.  Maybe not. 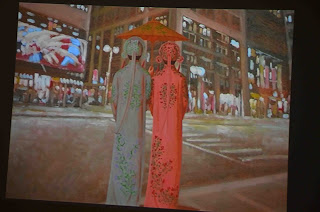 Artists I did not get to meet were the filmmakers Lily & Honglei. Their animation was quite poignant, slowly moving through the motions of a classical existence as it enters the contradictions of a modern city.  I waited and sat through the whole thing wanting to see if a resolution had been found that might be new, but the dilemma is like an eternal puzzle that resists solution, at least solutions as we know them.  A culture that knew quite clearly what was sacred now, has it met its match? 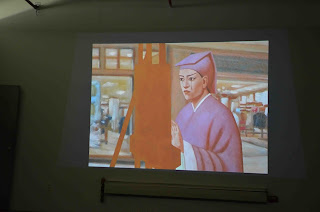 Making art to address the sacred is quite appropriate.  Both exhibitions, the Space Within and the Butterfly Effect, relying on young artists did so well, breaking new ground on a question that seems so easy, but has not been asked in an Asian American context till now.  Will this time prove right to have raised this question? Right for Asian Americans to see themselves in its tremors, and right for Americans of every persuasion to shed light on the issues that so preoccupy them?

It would be nice to see this sort of effort done again or on a bi-annual basis.  Working with artists and multiple organizations takes a great deal of time and work.  Finding the right curator is key.  Acquiring enough funds for a catalogue is important but sometimes not possible.  And trying to do such on a regular basis is probably asking too much.  Successful working relationships are not easy to come by. If this was a pinnacle rather than a start, so be it.  I only got to see seven of these events.  I wish I could have seen more.