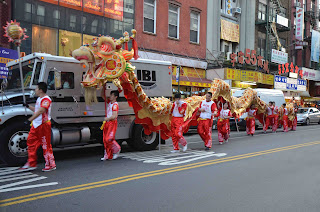 One of the scenes that can be seen in NY's Chinatown during holidays like ten-ten, October 10th, or National Day. After performing in the parade, the dragon is taken home to rest till another occasion calls it forth, and the trope that practices throughout the year, dons their costumes and performs again.  Lucky I caught them and got to follow them to the den. 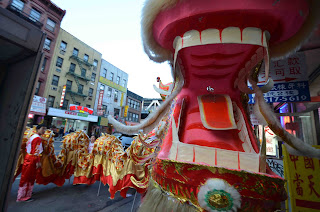 Reminds me of Lawrence Ferlinghetti's poem in the 1950s in San Francisco as part of the Beat Poets, the one where the dragon is free on the streets of San Francisco momentarily before its resumes its imprisonment in the basement of a dark tenement as the city fathers sigh of relief is expelled, and their fears are quelled, at least until the next rise again of the power of this ancient mind's imaginative creation.
Tagged