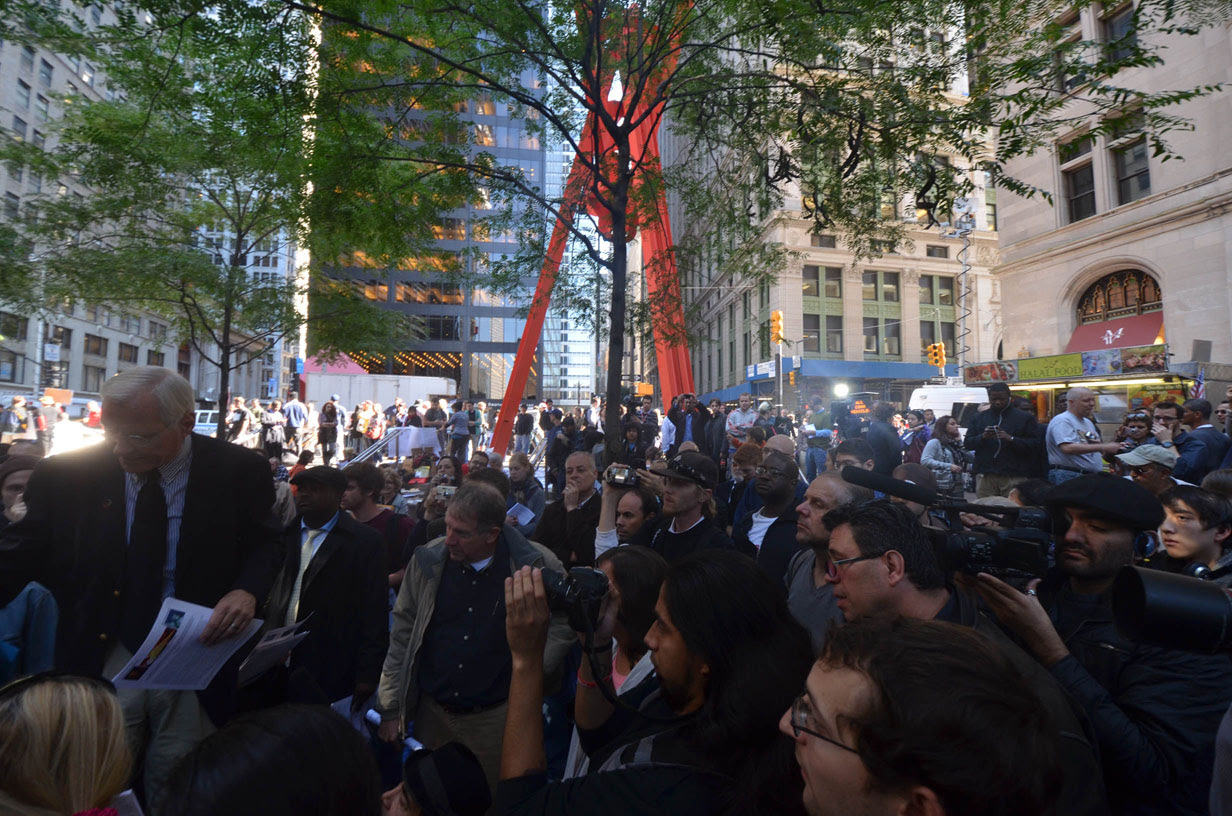 Zuccotti park at Broadway and Fulton is the site of the Occupy Wall Street demonstration.  In the early afternoon it’s still very crowded and here and there are speakers and discussion groups.  This older gentlemen offered his own set of solutions. 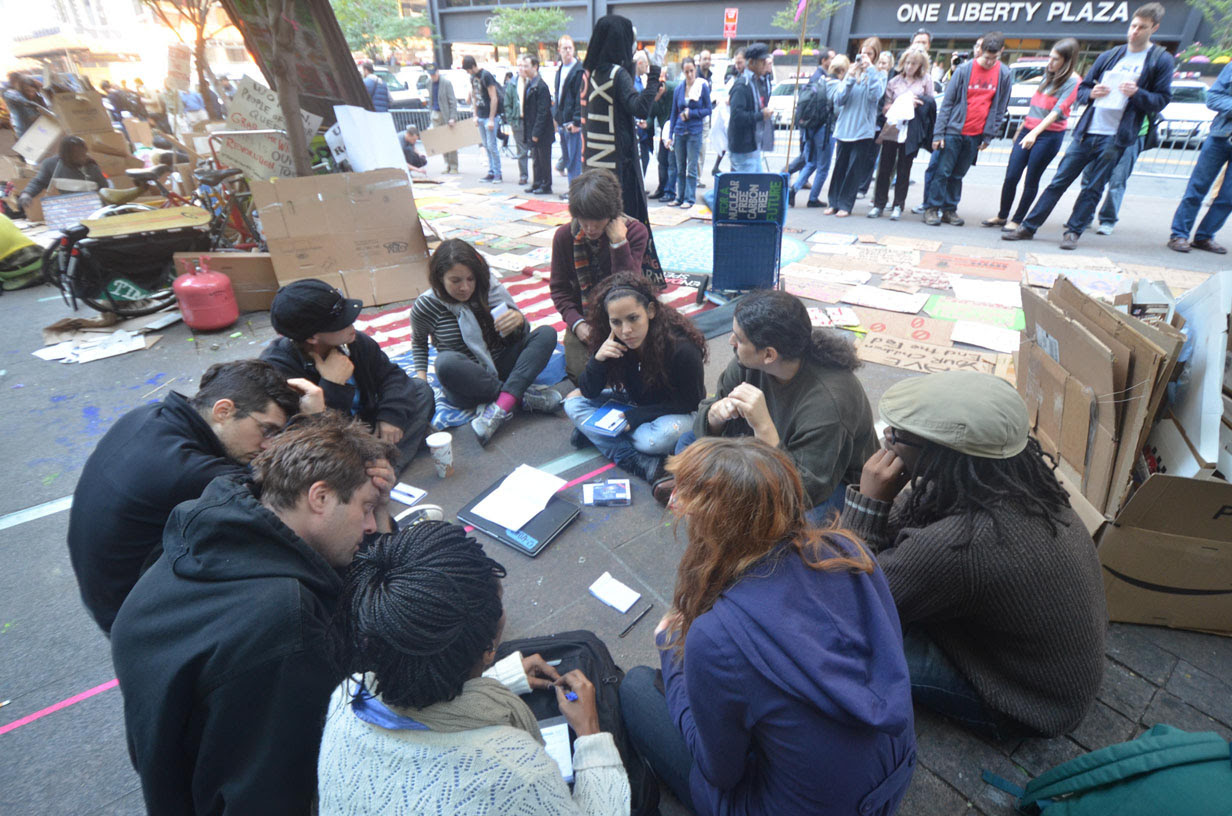 Serious discussions and planning meetings seem to be constantly happening.  Behind this group is a performance artist in costume. 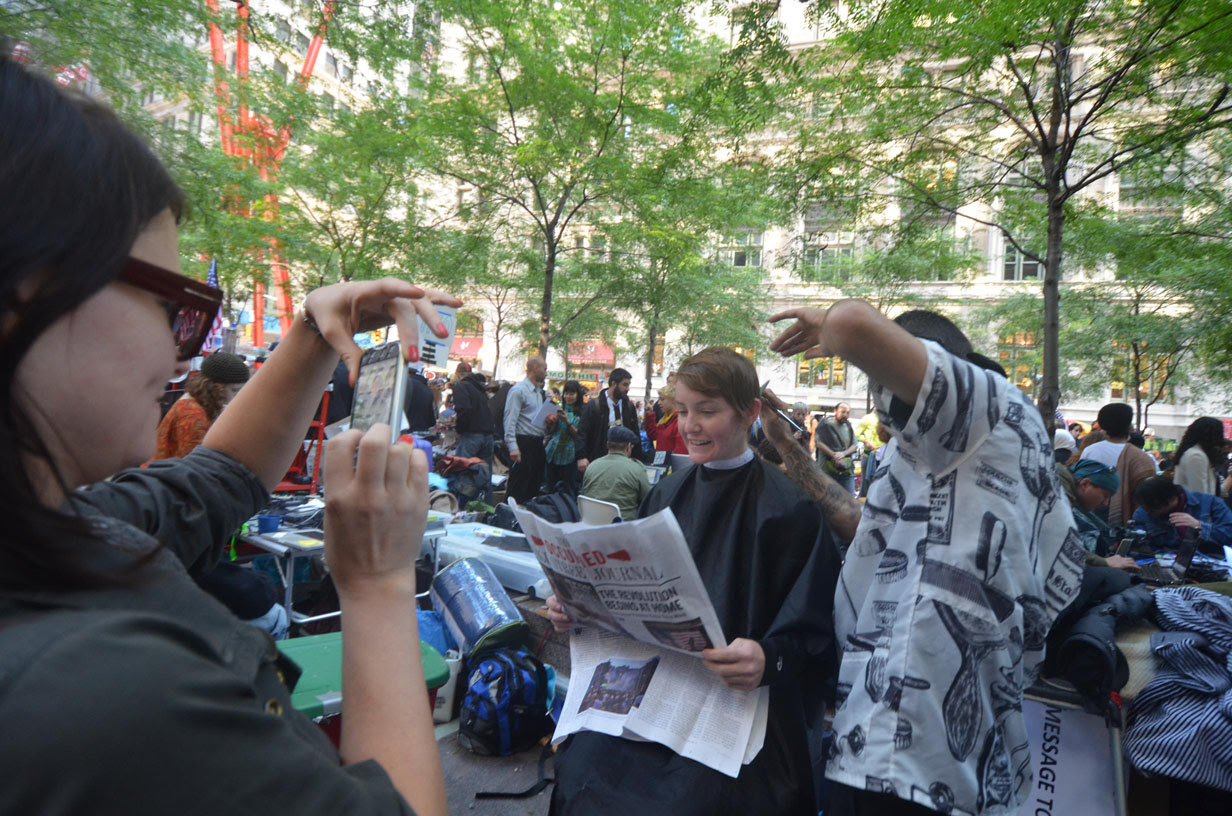 Someone getting a haircut.  Maybe one of the organizing leaders? Maybe not? 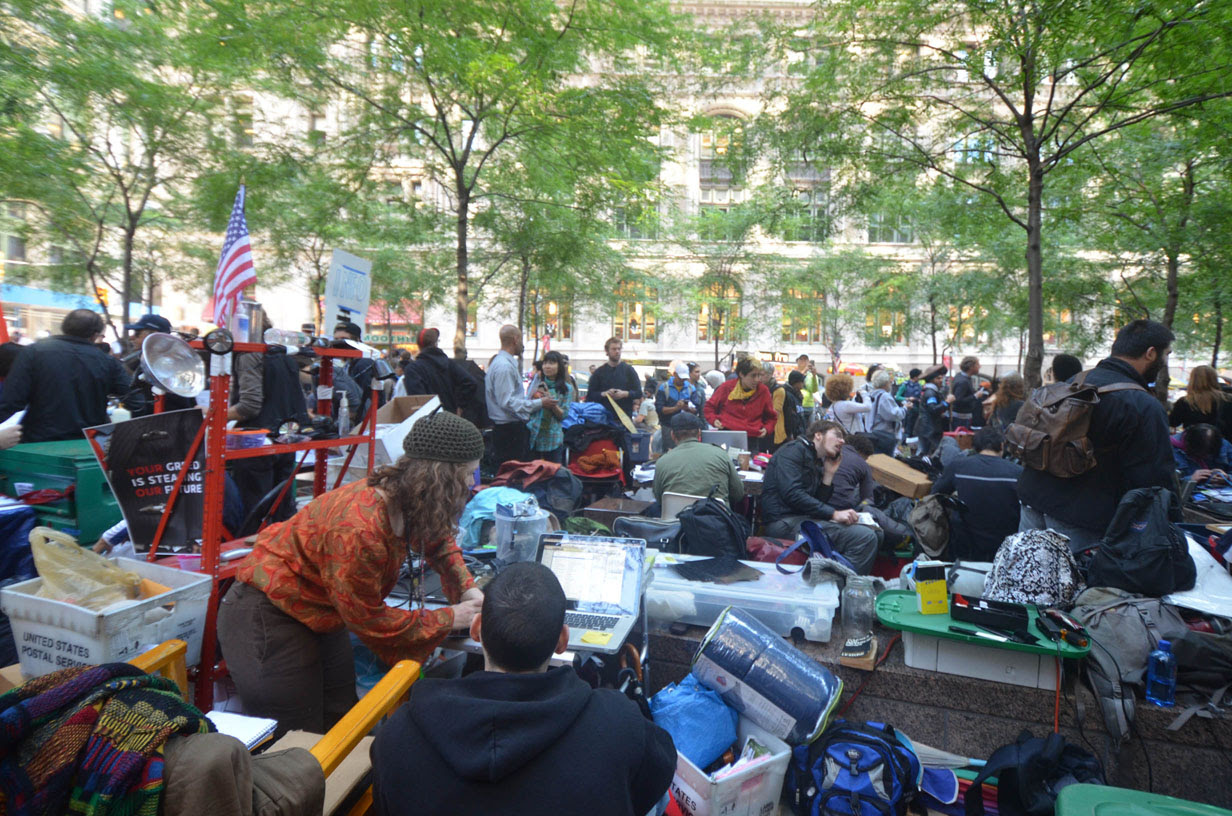 In the middle of the park is an essential area where organizing efforts are sustained and maintained. 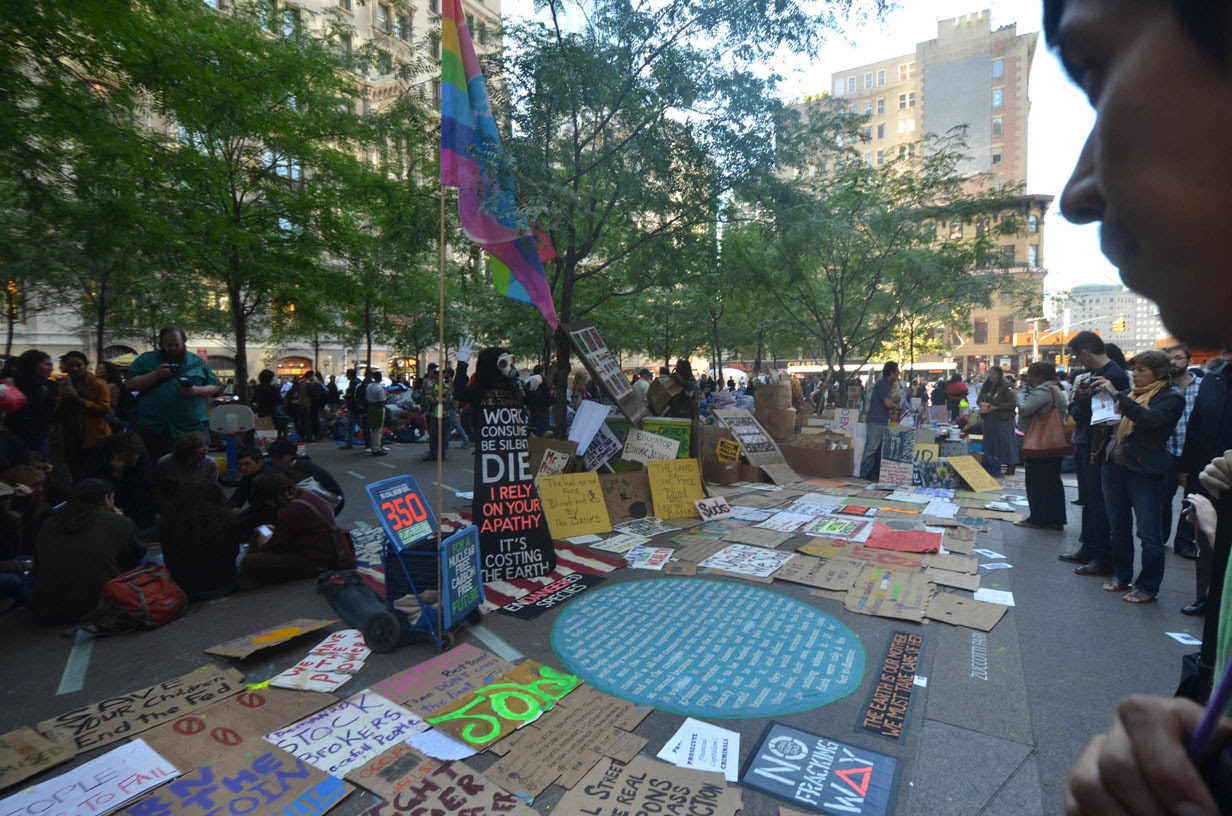 An area for posters, many quite interesting and insightful, worth reading.  They reflect the tone, the energy and the outlook of those gathered here. 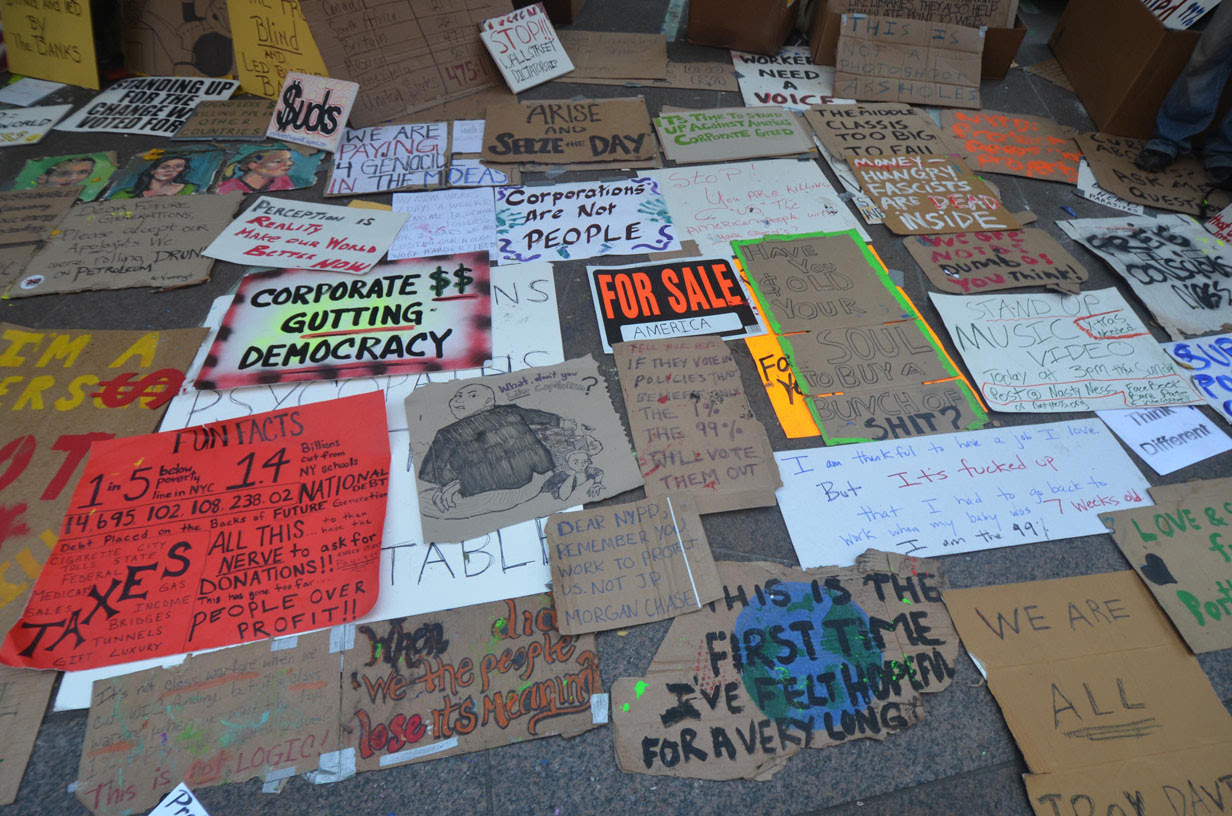 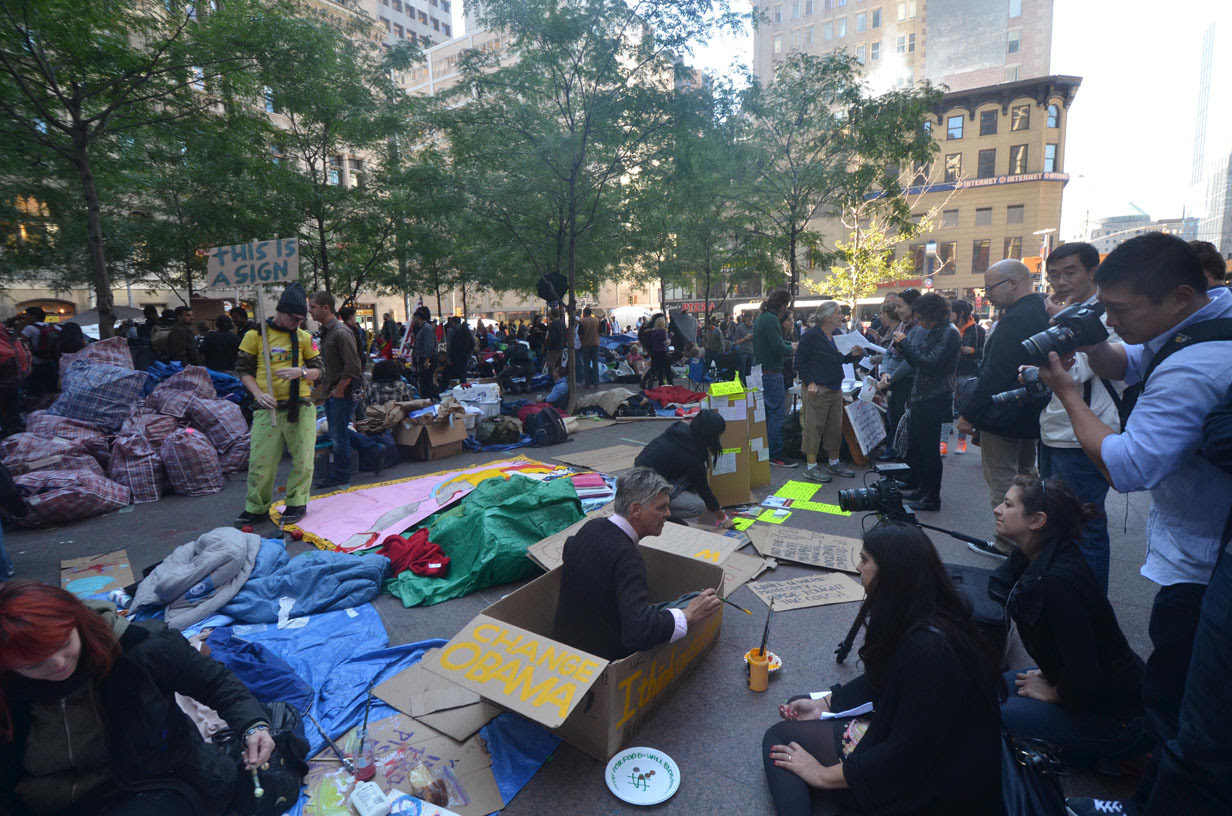 The gentlemen in the box is promoting his blog.  It’s about the story of what happened after he lost his job. 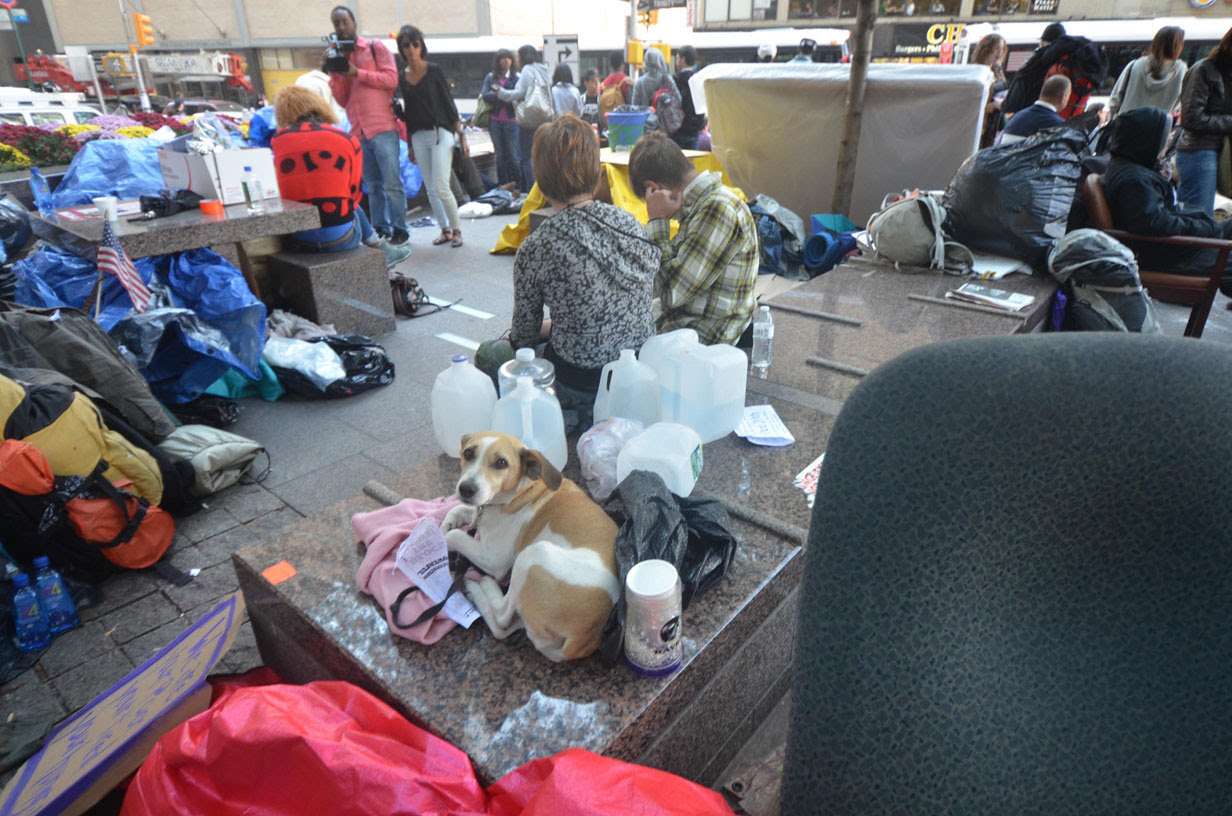 Sleeping bags, tarps and even a few pets occupied the park. 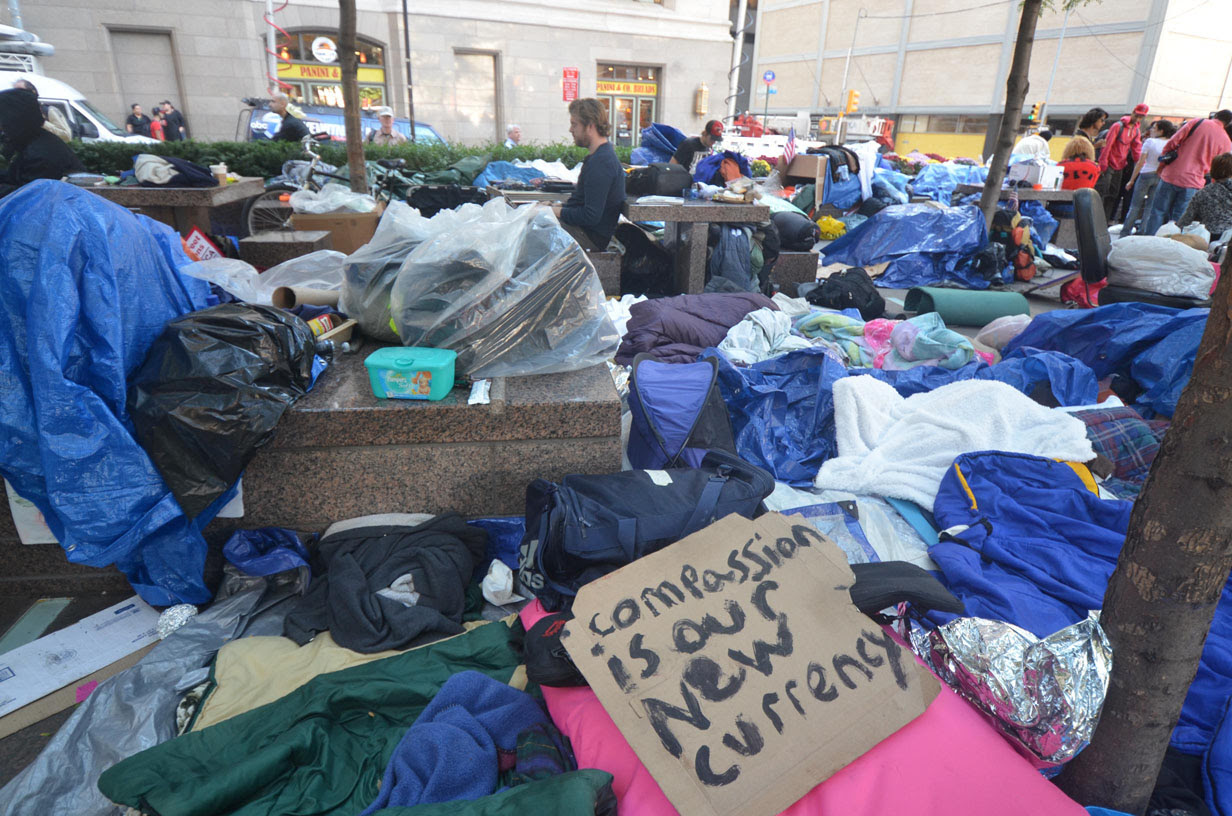 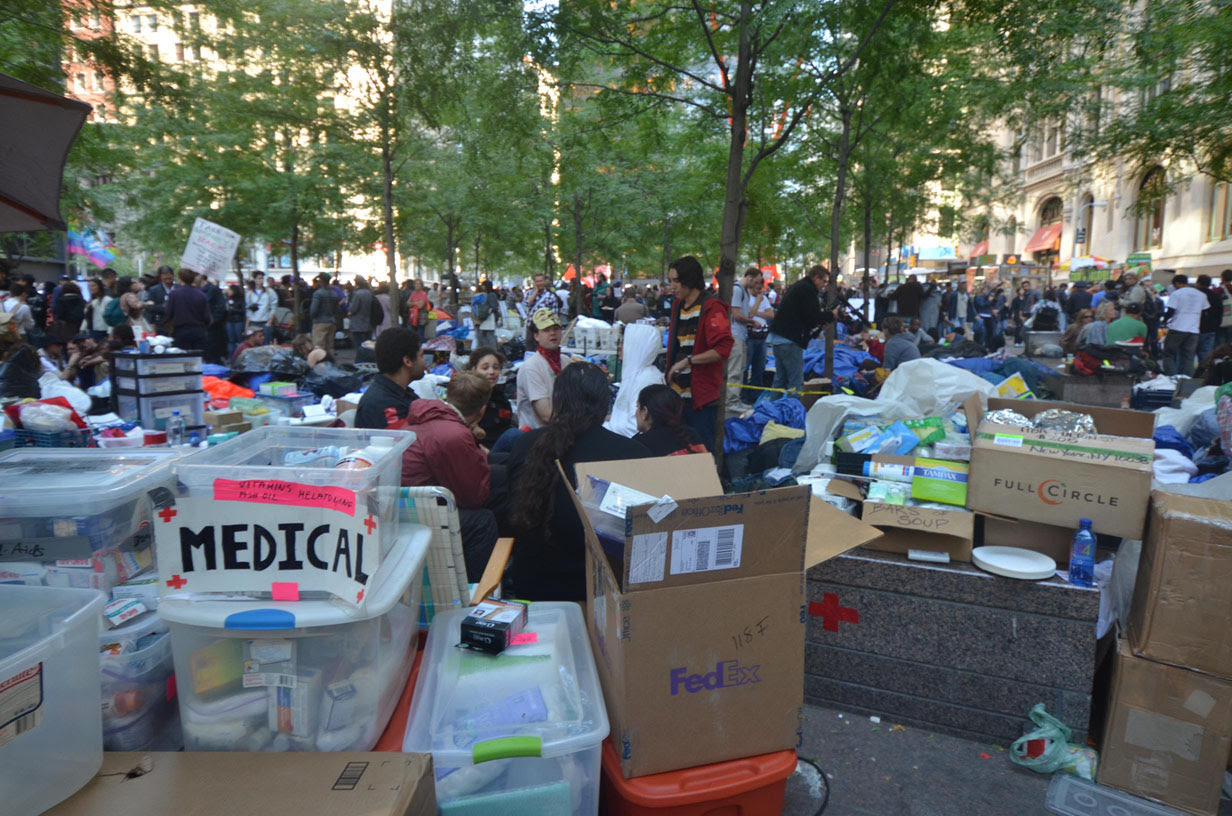 The site for medical assistance. 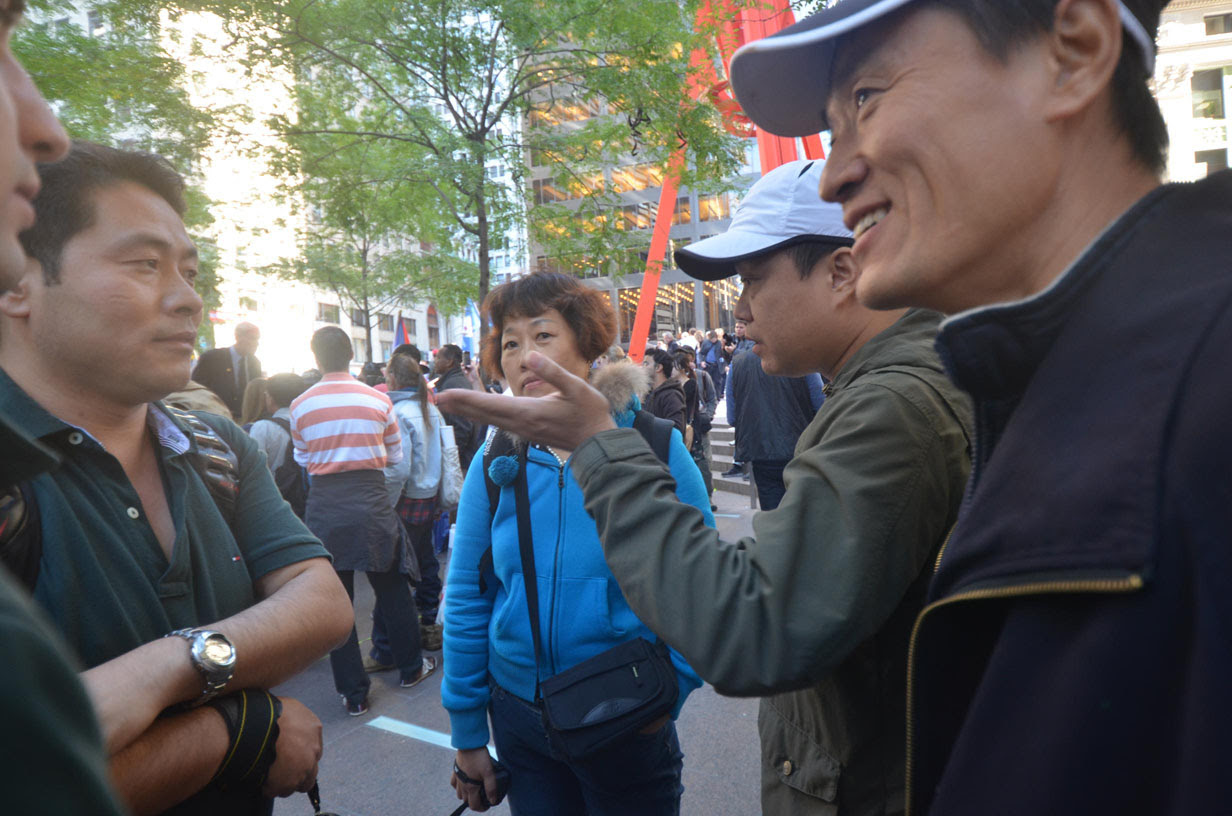 Asian people were not foreigners.   They were here and there in the park.  This group I met were working class people from Chinatown.  One of these men said he comes here everyday and discuss what the students should do based on the lessons and experience of what he knows from China.  The man in light blue cap is from Toi San . Nearby is an American who spoke Chinese somewhat.  I asked what he would want me to say in English to all those here in the park.  He said he and his American friend are friends.  Chinese people and American people can be friends just like this.  There is no reason for the kind of competition going on in the world. 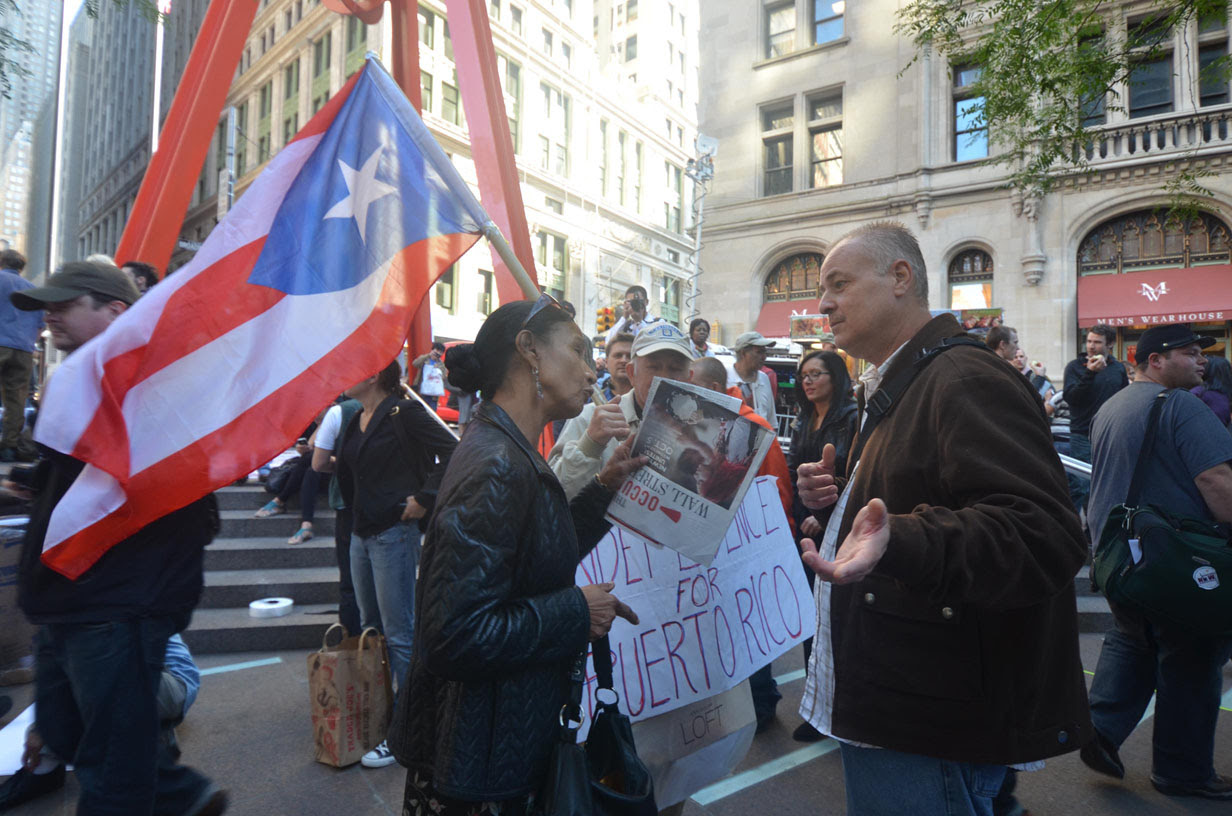 Diversity held a significant place in the park, not only were there flags promoting the independence of Puerto Rico, but special procedures during the general meetings every night allowed diverse people to have to privilege of speaking first, in order to offset historic biases. 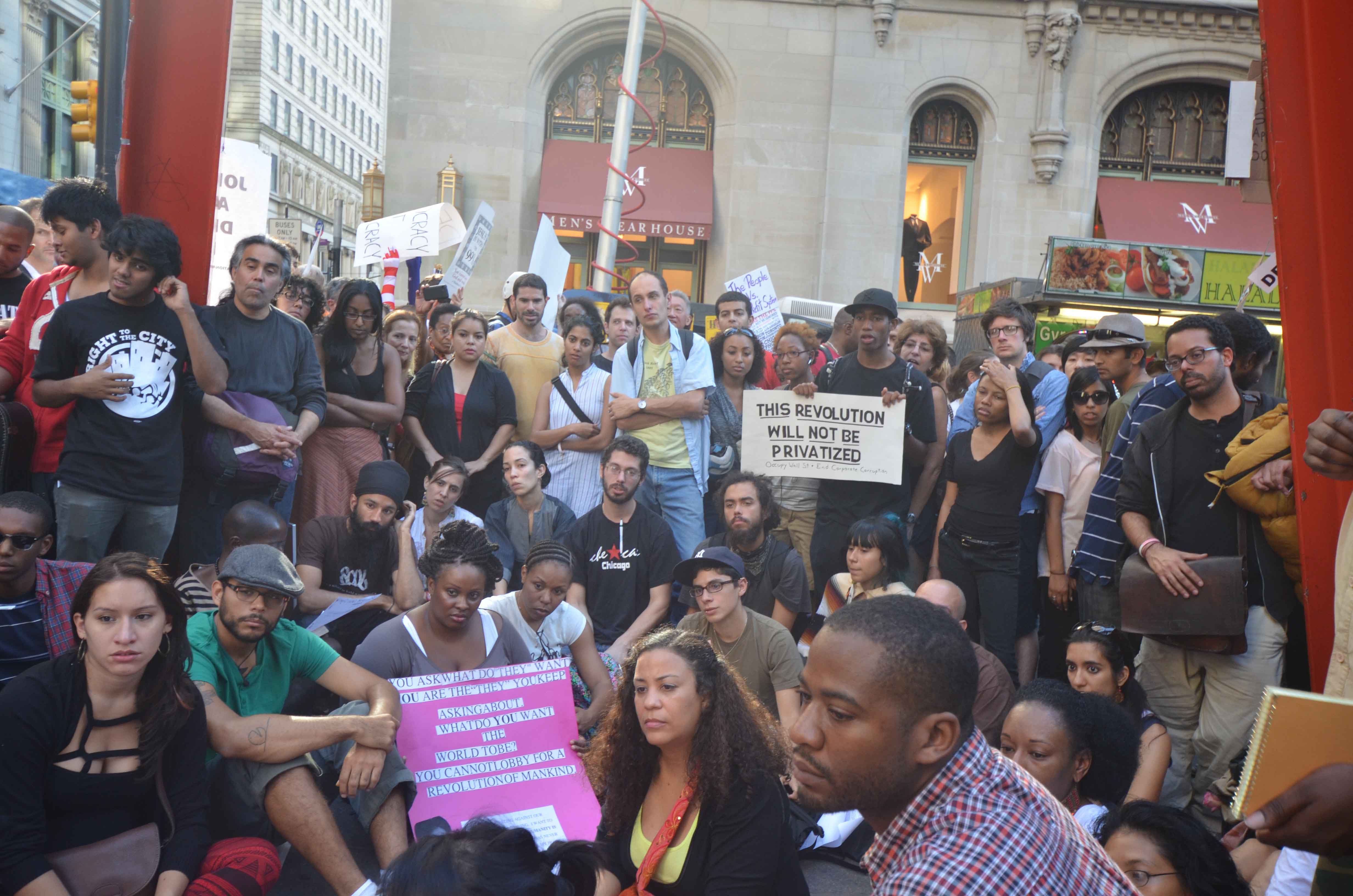 One of the working groups is the People of Color Group. This was their meeting on Sunday 3pm 10/9.  There is recognition that the issues of people of color must take their place within the OWS before it becomes as representative of the 99% as OWS claims. 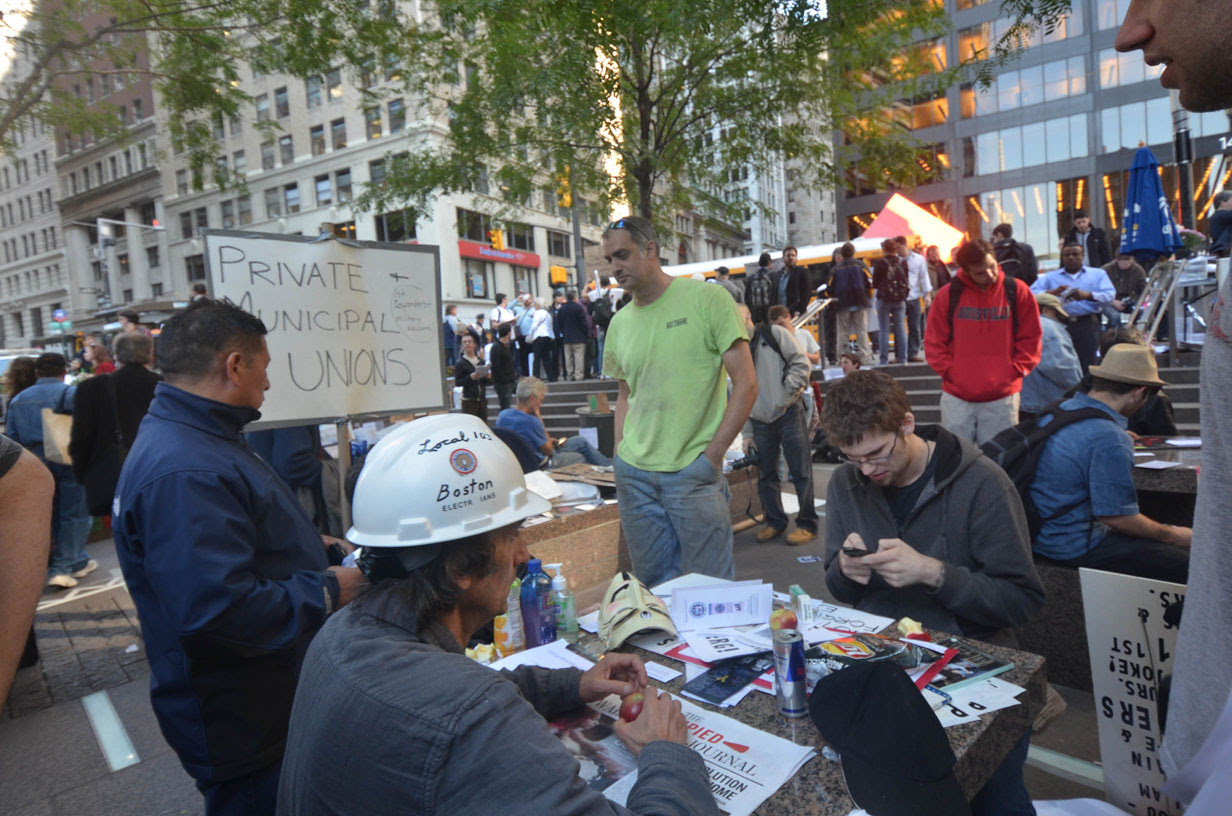 Labor unions had a strong presence. 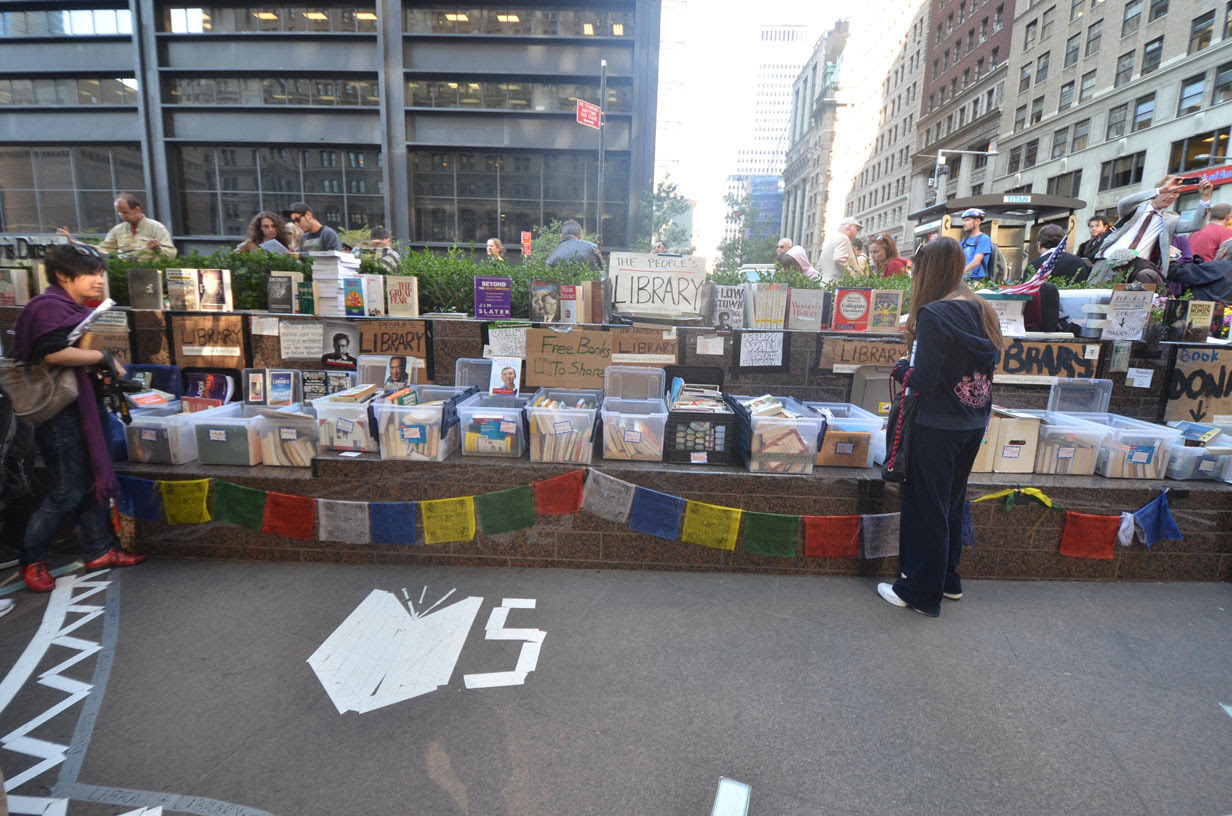 Life in the park had it’s amenities like free reading matter. 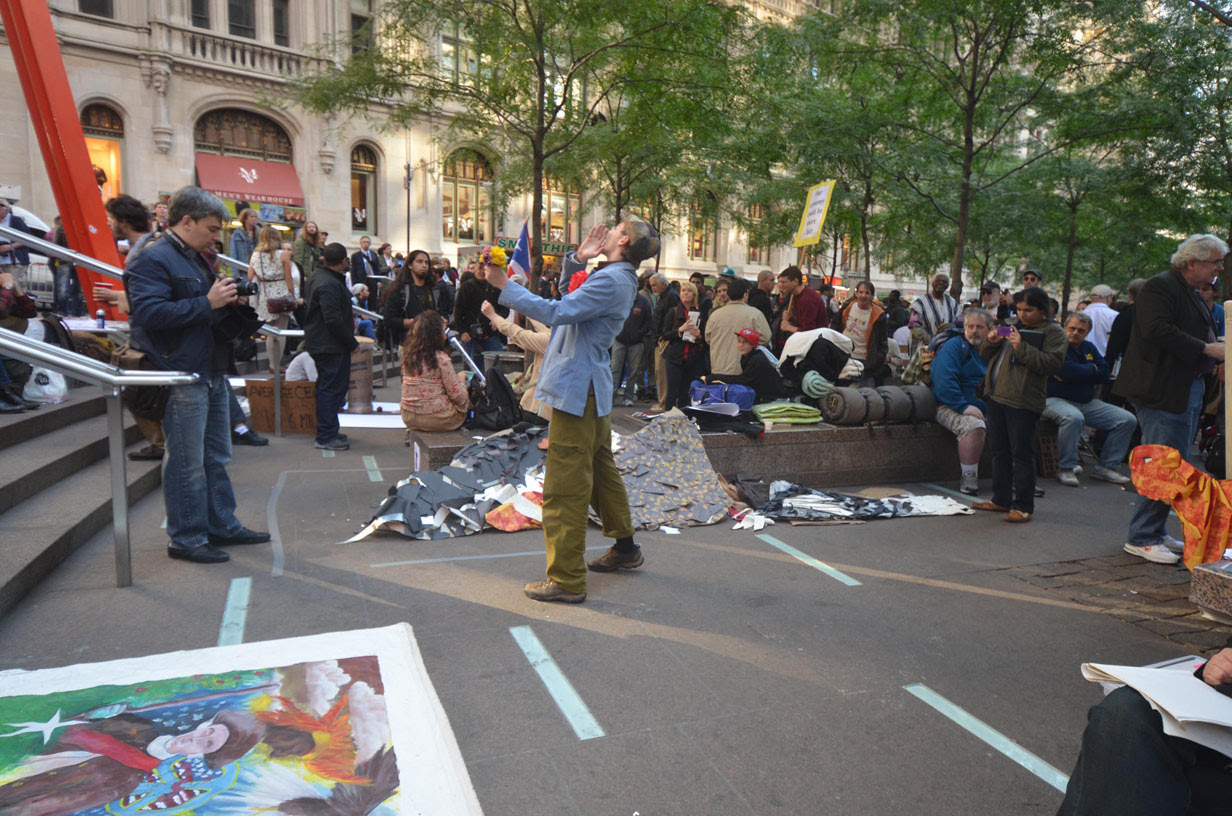 Art has it’s place also.  Here a performer announces a play to begin soon, along with next to his props.  One of the several standing committees are arts and culture. 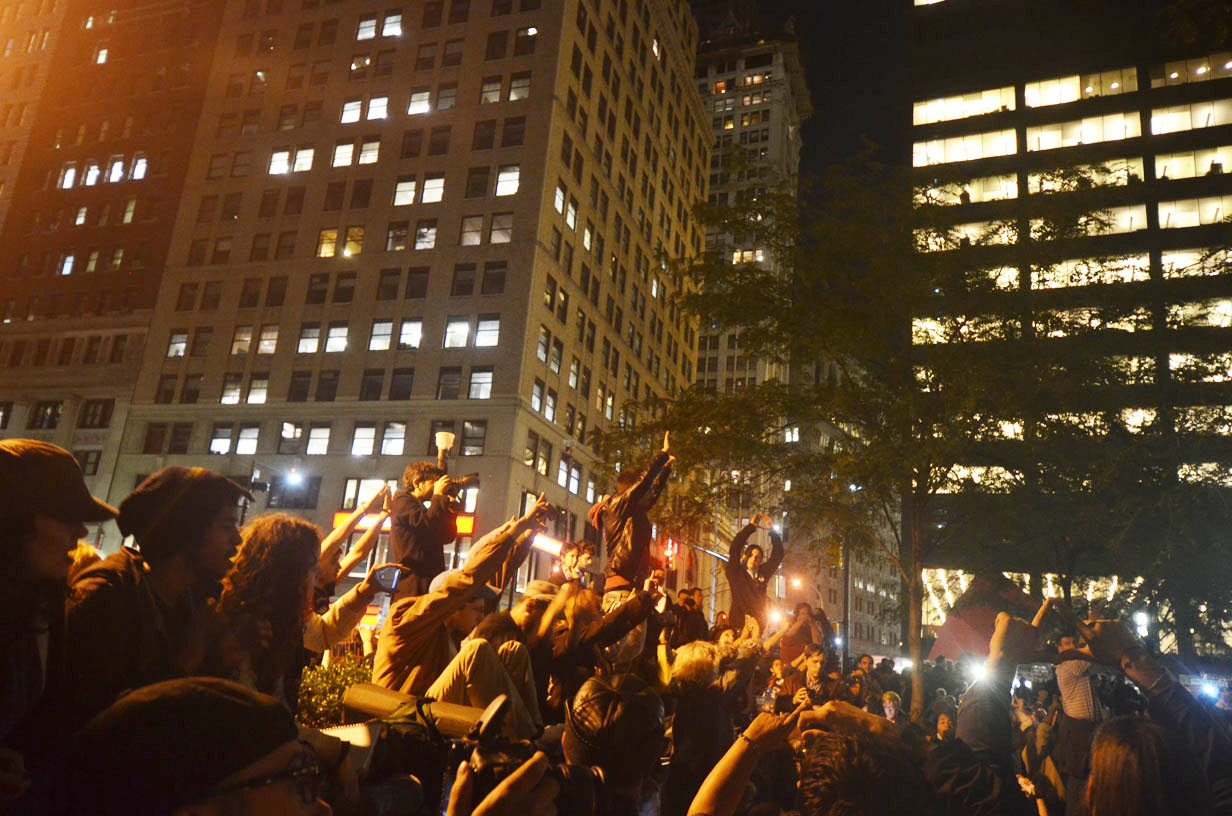 In the evening a general meeting is held every night.  Here the hand gestures that are used for these meetings are taught. After the speaker and before the general meeting, the crowd is huge. 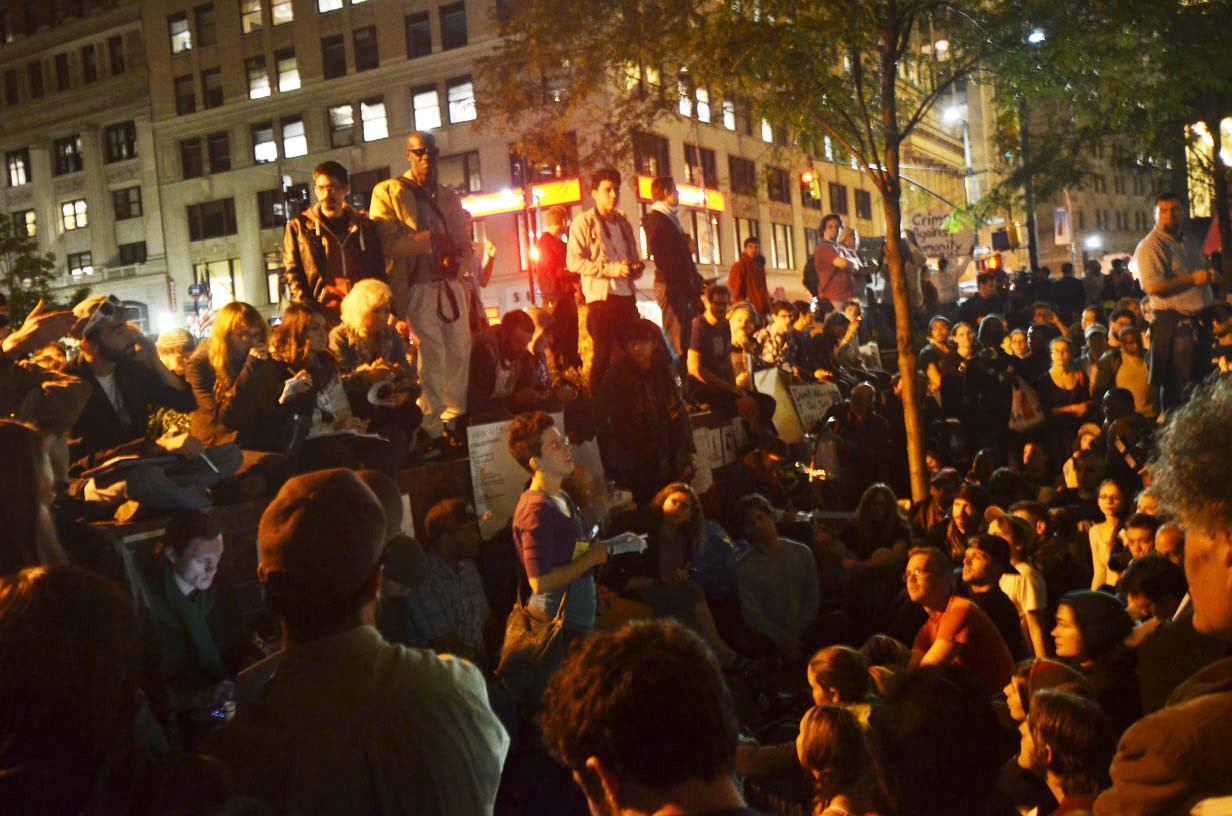 During the general meeting, and also during the speaker’s event, the spirit of the park is incredible to see.  One example is their absence of microphones that help to keep the general rules of discussion and decision making in place. 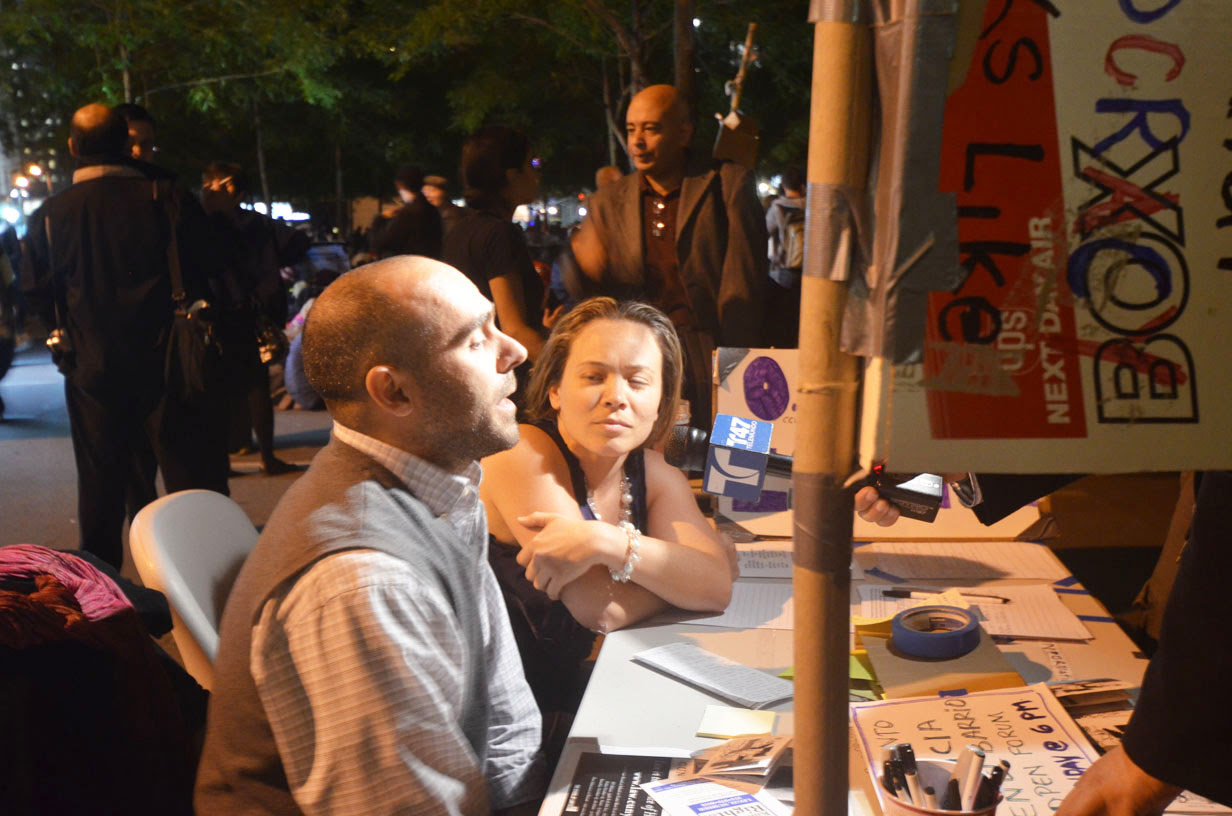 One table in the park was for the effort to spread the ideas and principle of occupation of wall street to the Latino community.  Two people have taken upon themselves to organize a discussion in up and coming Sunday in Español.  Here they are being interviewed by a Spanish T.V station. 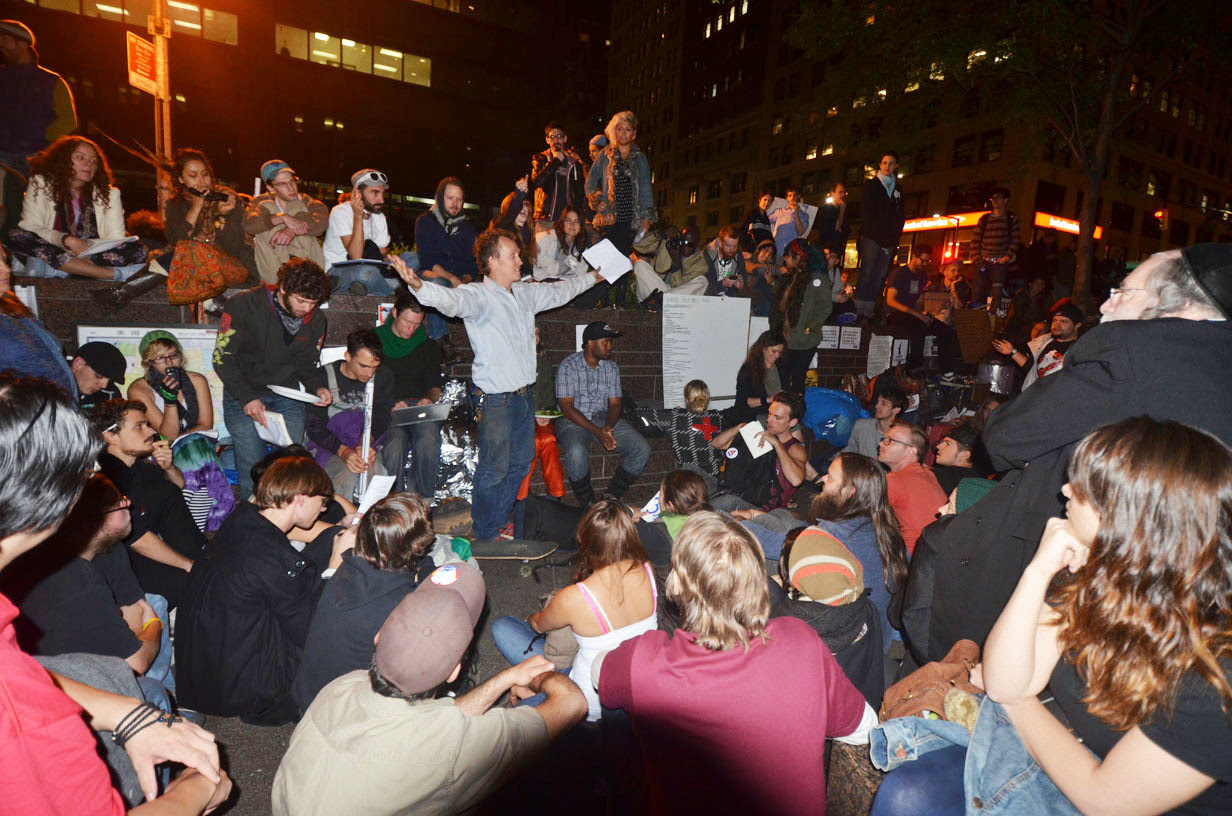 During the general meeting, the most remarkable experience is to see how the group overcomes its difficulties.  Microphones were replaced by three layers of repetitions of hundreds of people repeating what the speakers would say.  To maintain this process, I heard them calling “Mic Check!” which would ring out in the first circle of people, to the second circle, then to the third circle of people, so nearly the whole park can hear clearly what was being said. 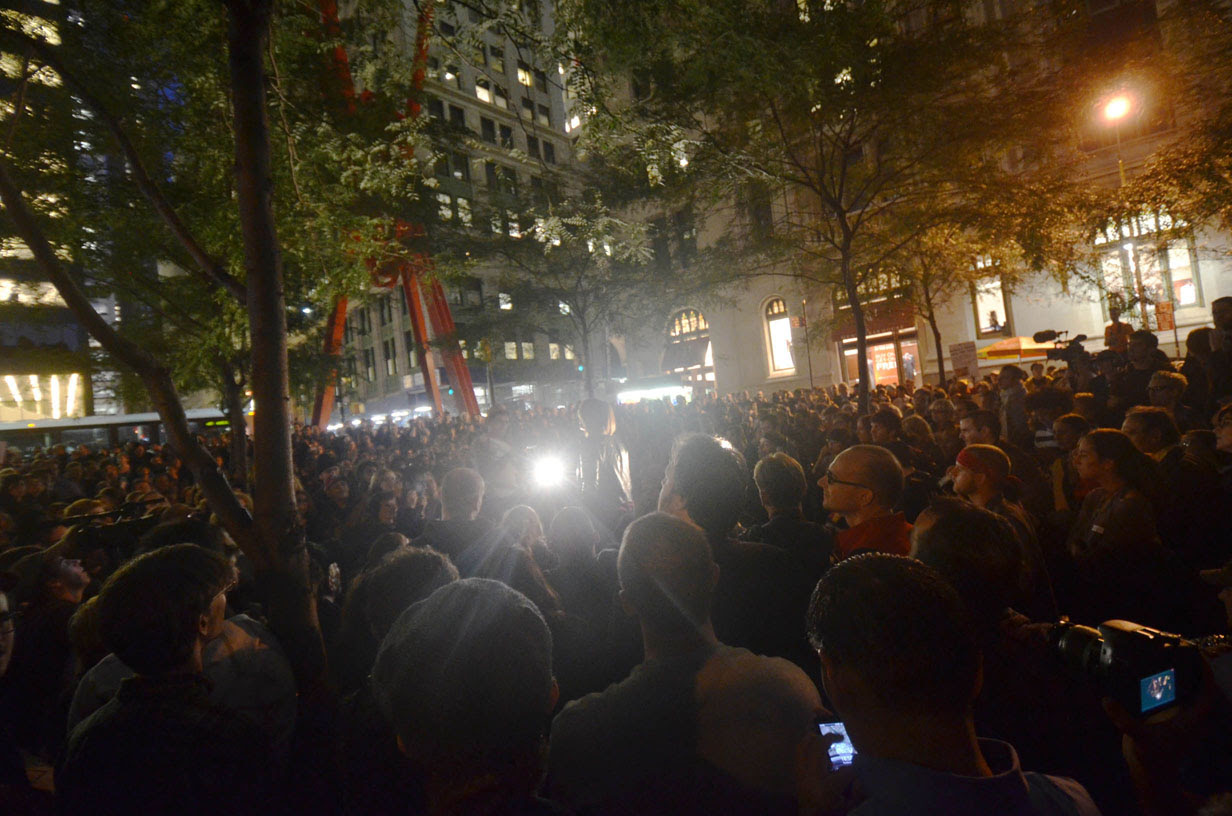 Naomi Klein came down to speak to the group at 6pm.  She said in a radio interview that one thing which convinced her to come and address to the demonstrators was an image of a women holding up a poster that said “I cared about you.”  She knew that what was happening in this demonstration was beyond rhetoric, and the ego of the capitalism was being challenged. Naomi Klein is the author of “The Shock Doctrine.” 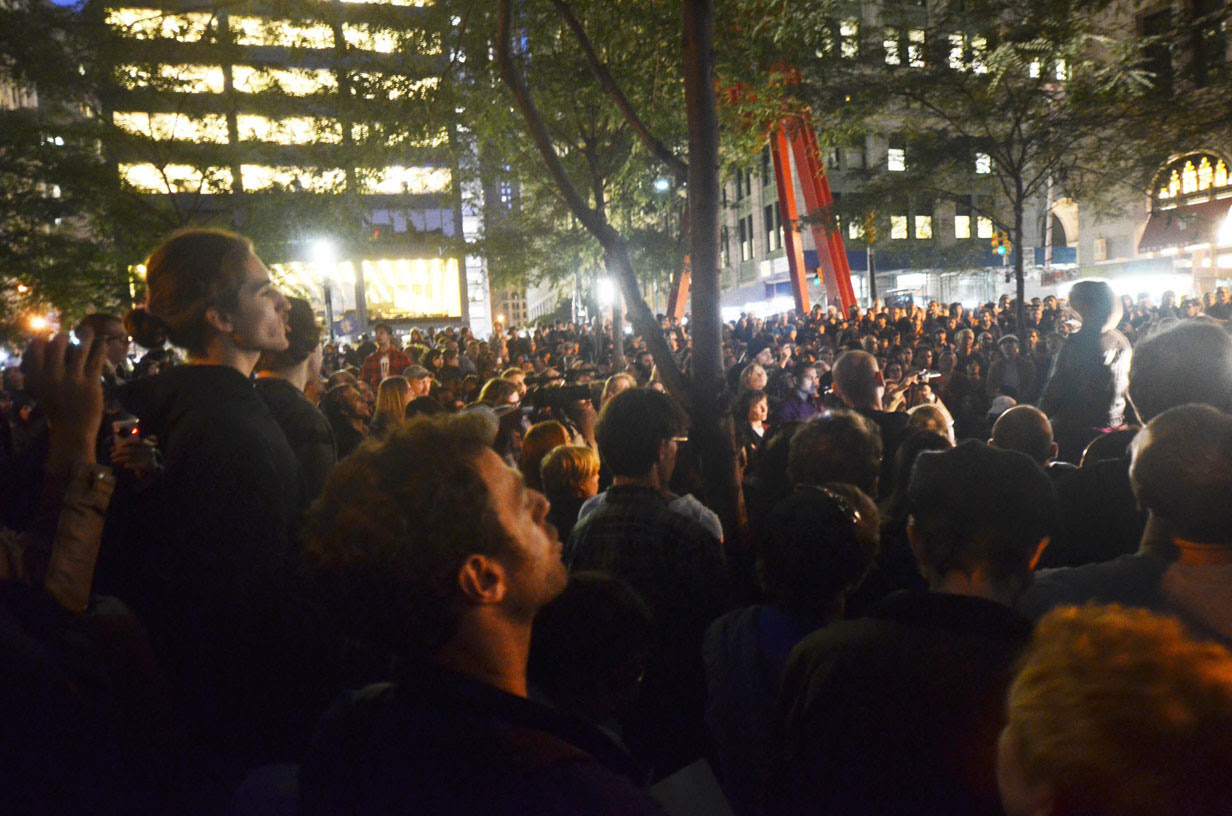 Another image of the crowed listening to Naomi Klein. 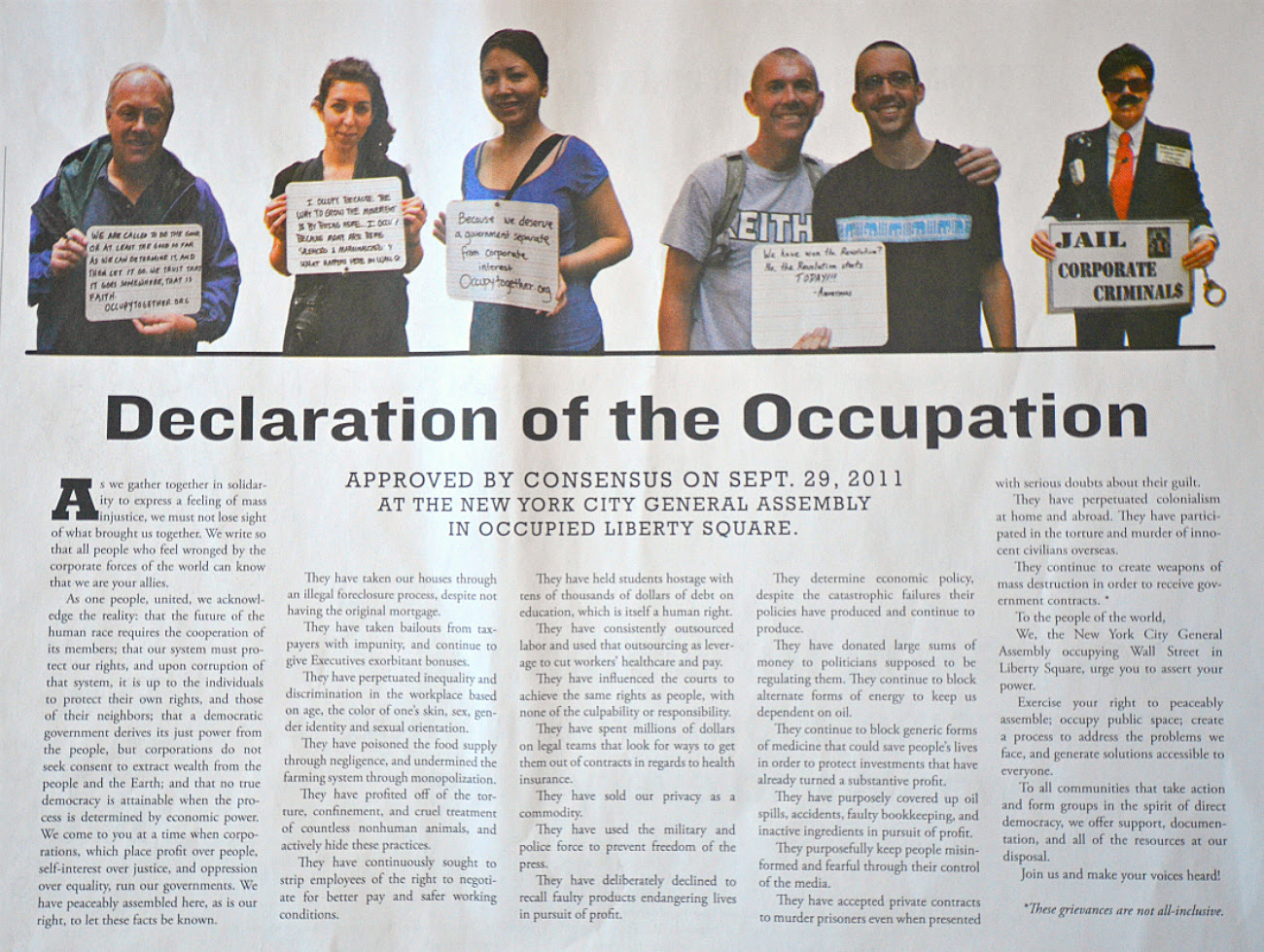 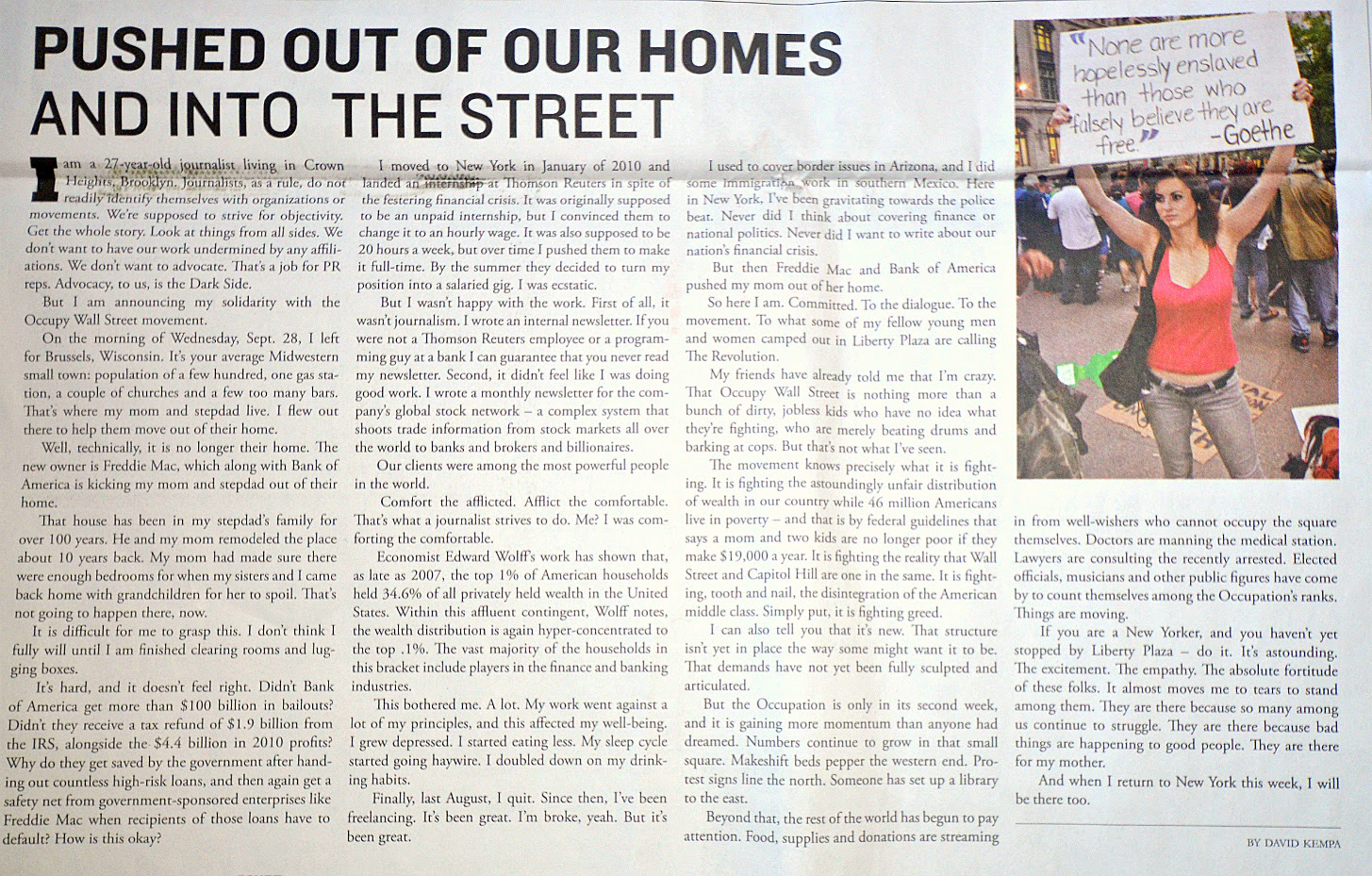 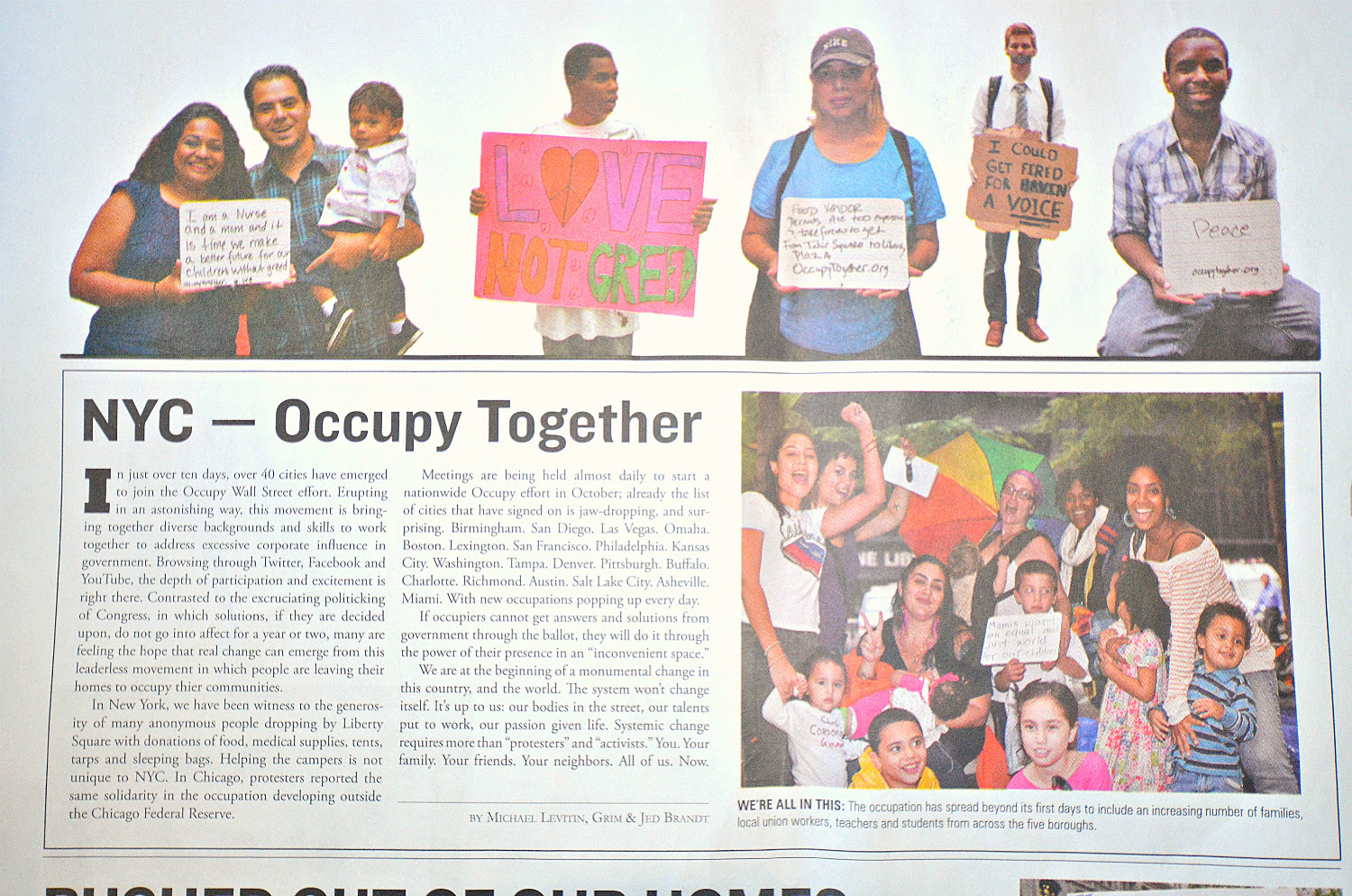 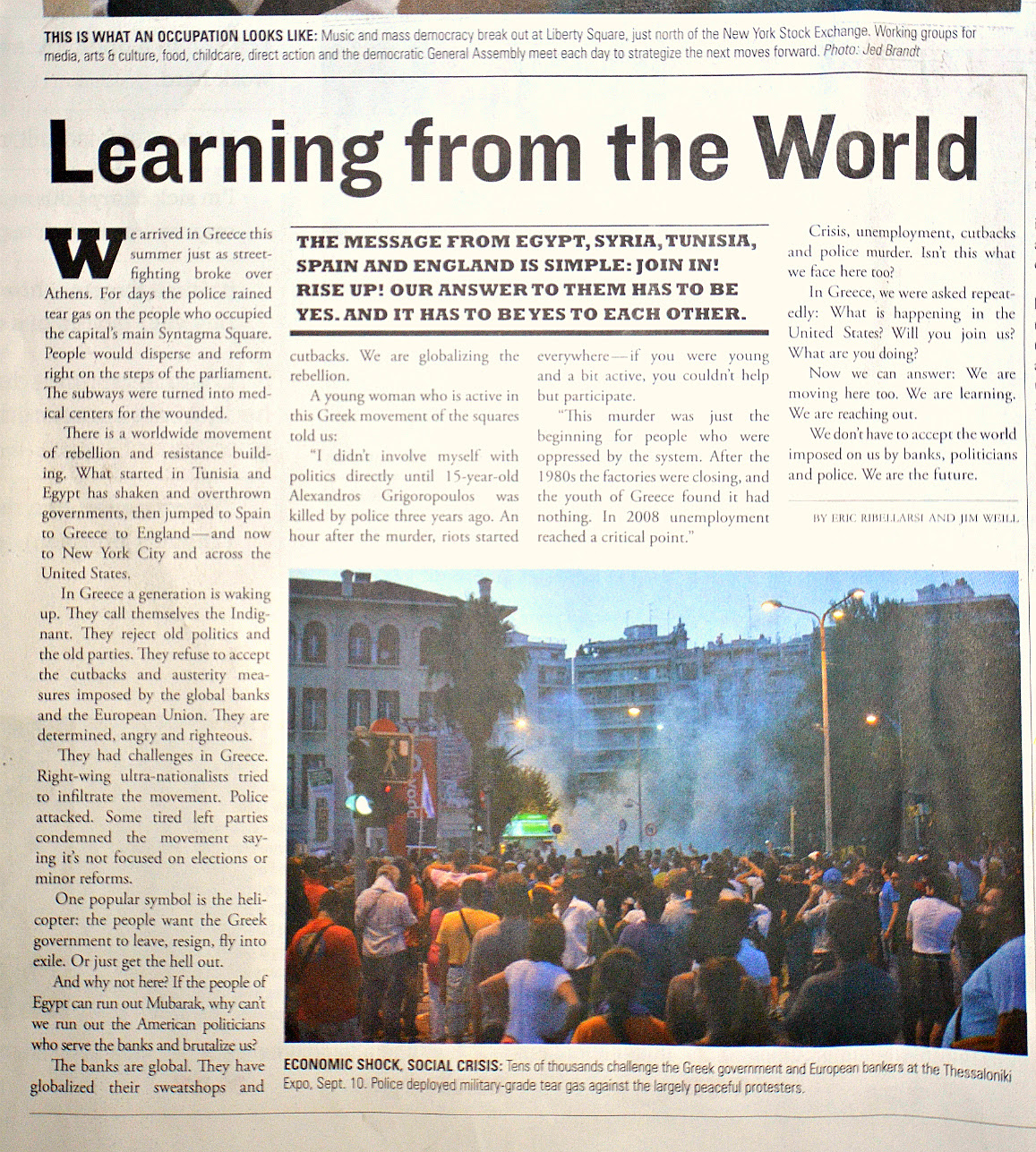 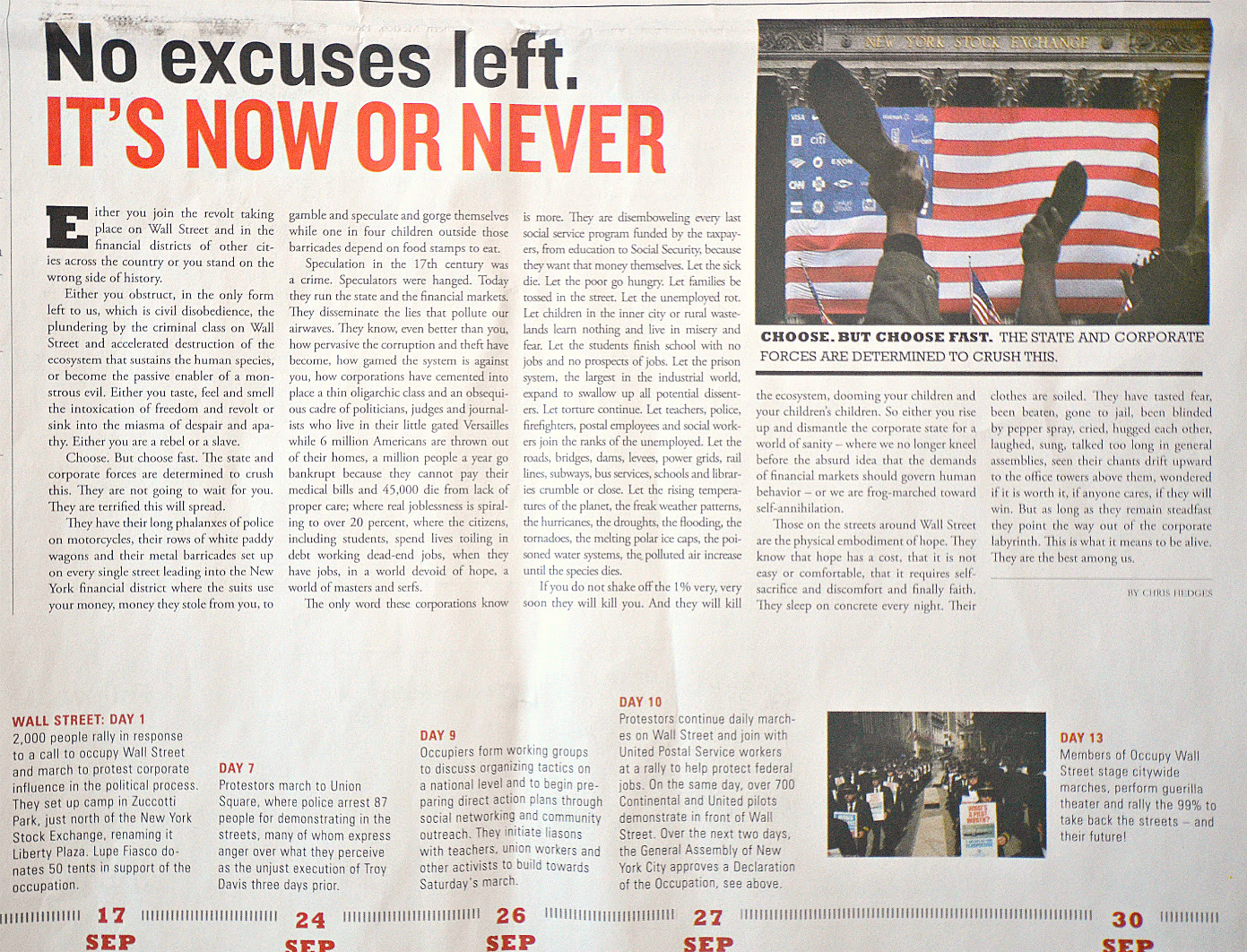 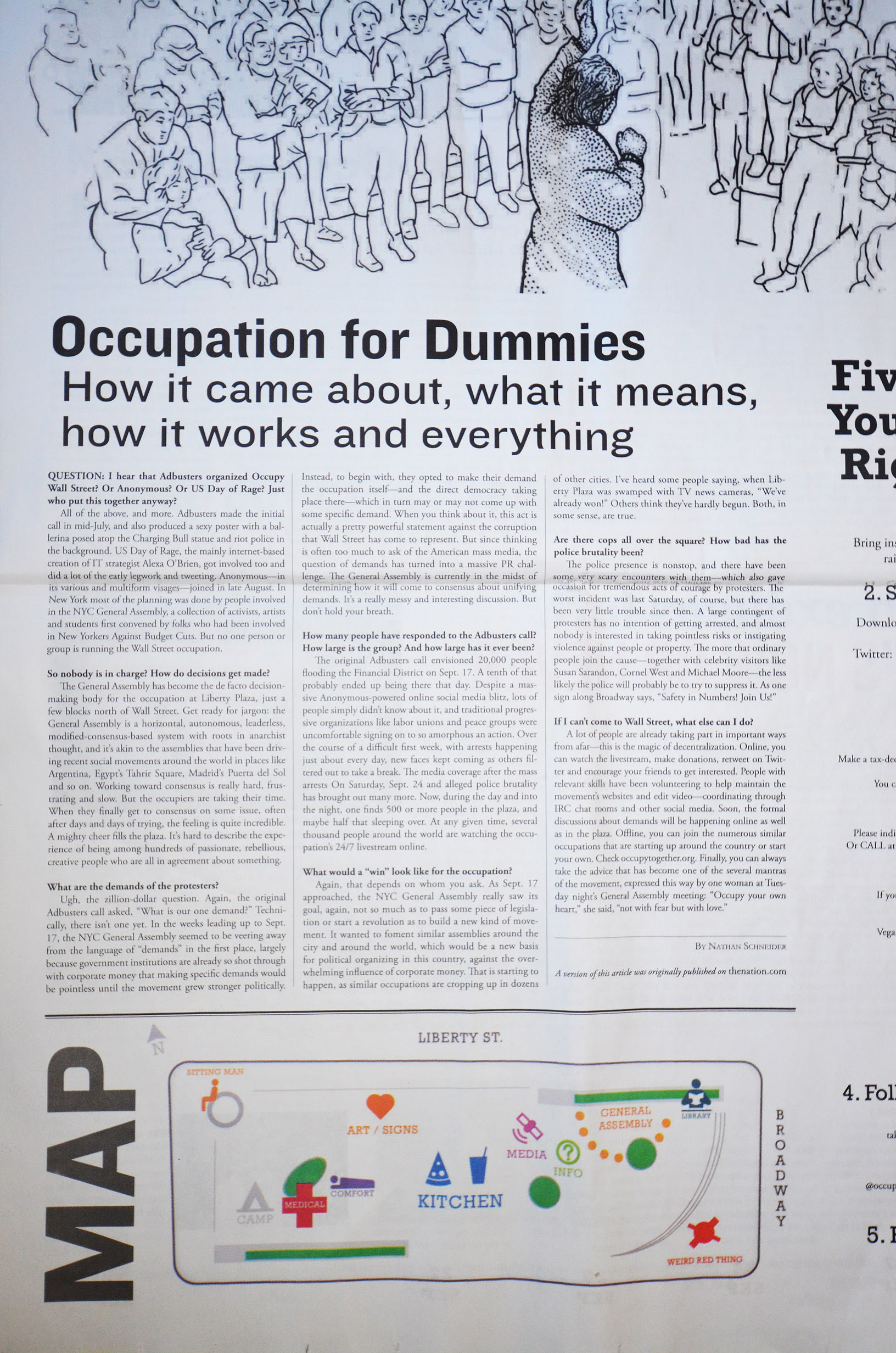 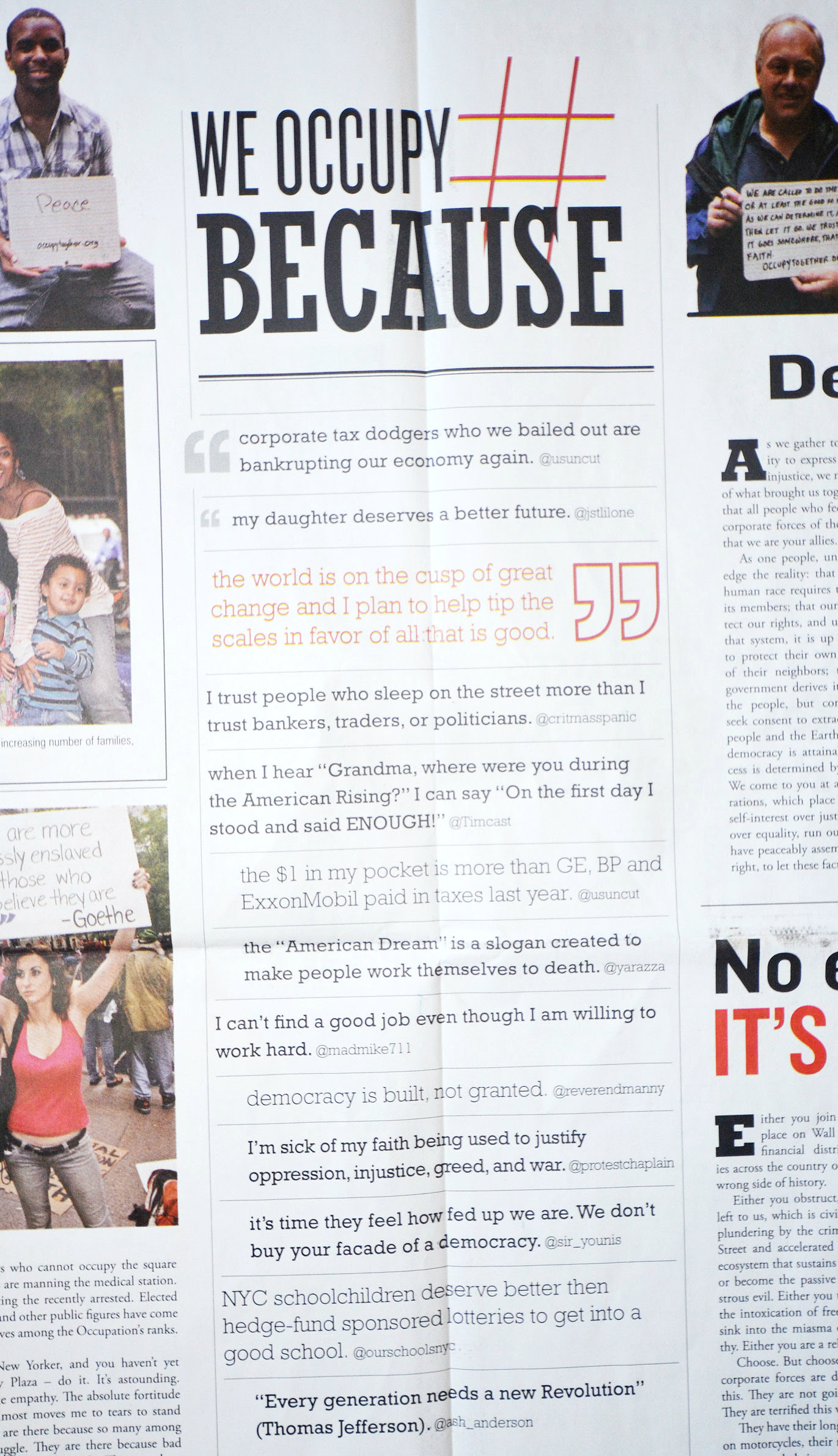 To offset mass media distortions, several articles in the news letters are shown here.  Clear enough to be read.


The clarity of planning and thought demonstrated by these articles shows the level of sophistication and planning of an open ended process taking place.