‘Detained’ in America: Immigration, Incarceration, and Imperialism in Diasporic Art 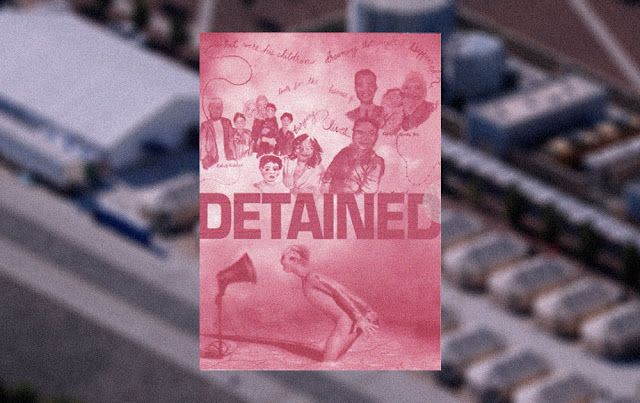 On June 27, the U.S. Supreme Court ruled 5 to 4 in favor of upholding President Trump’s travel ban against Iran, Libya, Somalia, Syria, and Yemen. Although the official majority position written by Chief Justice John Roberts shies away from an explicit alignment with anti-Muslim bias, the fact remains that imposing a prohibition on migrants and visitors from five Muslim-majority countries enacts a vicious ideology of nativism against Muslims and other communities that do not fit the criteria of white, Christian, English-speaking, Western educated, upper-class, able-bodied, documented citizen. The same logic can be applied to the Department of Justice’s announcement on June 29 that it would, after intense public outcry, keep immigrant families together—in indefinite detention.

These decisions, far from being exceptions to the rule of American values, merely continue a long tradition in the country’s history of criminalizing the migrations and movements of people of color in the name of “security”, “merit”, and “legality”.

As the American people are confronted with the compounding moral crises of unchecked ICE raids, immigrant concentration camps, anti-black police brutality, complicity in Israel’s ethnic cleansing of Palestine, federal-level assaults on the labor movement, and Islamophobic travel bans, they would do well to look to the past for clues concerning the cause and consequence of their country’s shameful behavior both within and beyond its borders. This behavior—all of it transpiring under the failed leadership of the U.S. political establishment—has evaded justice and public apprehension for decades, if not centuries.

In addition to the panel and exhibition, Detained also featured a talk by James Yee, a former chaplain for the U.S. Army stationed at Guantanamo Bay who was arrested on unsubstantiated espionage charges and detained in solitary confinement for 76 days in 2003. Yee, a New Jersey-born Chinese American who converted to Islam, spoke out against the torture and unjust incarceration of Guantanamo’s Muslim detainees to whom he had been assigned to administer spiritual aid—and was tortured by his own country in return.

Turning to the artists, we witness parallels that run across (but do not negate) lines of race, time, gender, location, medium, and gesture. From the unsettling photographic/performance/video art of Wafaa Bilal’s “The Human Condition”, Trong Nguyen’s “Messages from Guantanamo”, and Jenny Polak & Dread Scott’s “Welcome to America”, to the archivalist re-creations of Chitra Ganesh and Mariam Ghani’s “Index of the Disappeared” and Dorothy Imagire’s “Japanese American Concentration Camp”, there runs a common ethos of making visible that which has been concealed from view in American culture. Much like Ganesh and Ghani’s interactive “Guantanamo Effect”, we can thread an incriminating red line linking out-of-sight, out-of-mind incarceration centers like Angel Island, Carlisle boarding school, Attica, Manzanar, Guantanamo Bay, Rikers Island, and Brownsville together: an unthinkable genealogy of grotesque relations.

In that vein, Wafaa Bilal’s watershed 2007 exhibition “Domestic Tension”, though it was not featured in Detained, exposes the contradictions of U.S. imperialism in creating climates of total war and total indifference that simultaneously co-constitute and slip past each other—holding some in thrall so that the rest might be “free”. For 31 days, Bilal confined himself to a solitary room and placed his body at the mercy of a paintball rifle whose trigger could be pulled via an open-access chat room trafficked by thousands of visitors by the end of the month. The ceaseless rat-tat-tat of the rifle, the large splotches of yellow paint plastering the room, and Bilal’s vulnerable, fugitive figure are testaments to the faceless, nameless precision violence which the artist experienced firsthand as an Iraqi refugee who lost his brother to an unmanned U.S. drone strike in 2005.

So let’s expand our frame of reference: as Wafaa Bilal’s art shows us, detention, violence, and containment are issues that cannot be limited to sites existing within the mapped borders of the United States. All the different waves of migrants and refugees from Latin America, Africa, the Middle East, and Asia who have flocked to North America within the past hundred years—where are they coming from? And I don’t mean this in the No, where are you really from? sense. What I am asking is: what are the contexts, the conditions, the circumstances out of which certain groups of people have been compelled to take flight—and then get detained?

To try to answer that question, we need to start asking a larger set of questions: How many wars has the United States, whether by direct invasion or proxy campaign, started in the rest of the world? How many military bases have we—and I say we because most of us have consented to this peculiar government and its perplexing history—installed in countries that we have no conceivable right to occupy? How many violent coups and capitalist regimes have we financed in Central and South America? How many bombs have we dropped on Southeast, Central, and East Asia? How many tons of oil, rubber, cocoa, gold, salt, diamonds, ivory, and wood have we extracted from Africa—and for how much profit?

Interchange the recipients in each of the questions above and you’ll get directly variable results. However, the underlying function—U.S. imperialism—remains the same. At every link in the chain of the many diasporas implicated in the Detained exhibition, the myth of American benevolence crumples and collapses under the weight of its own deafening hypocrisy. People come to this country because this country has undermined and maimed their countries; we detain people from those countries because we believe they will undermine and maim this country. This empire.

Without losing sight of what is unfolding right before us—American state and corporate interests culling working class families and children for indefinite detention in euphemized concentration camps—we push forward through the veils of anonymity, indifference, and misinformation obscuring our view of the larger picture. No longer able to fool ourselves, art pushes us to confront the reality of the kind of people we really are—and the possibilities of who we might become.