A Critical History: AAAC in Reviews


Throughout the decades AAAC has received critical attention from various sources. While going through our archives we recently rediscovered several articles referencing the Asian American Art Centre’s exhibitions and activities, a few of which we present here.

AAAC is particularly thankful to Holland Cotter for his continued acknowledgement of AAAC’s work, in addition to that of other diverse artists and organizations. Cotter has written for the New York Times since 1998 and won the Pulitzer Prize for Criticism in 2009; his focus on multiculturalism has brought many artists of color into the mainstream. He reviewed a number of AAAC’s exhibitions from 1999 to 2003.

In his 2001 article on art in the Lower East Side, Cotter describes AAAC as “a hard-working, meagerly financed grass-roots institution that caters to community needs but has an internationalist perspective broader than that of most galleries in the mainstream,” adding that “under the direction of Robert Lee, this nonprofit space has given many Asian-American artists, young and old, exposure impossible to find elsewhere.” On the 1999 exhibition 7 lb. 9 oz.: The Reintegration of Tradition in Contemporary Art, Cotter writes that AAAC “was founded long before multiculturalism was so much as a glint in the mainstream art world’s eye” and praises AAAC’s “very smart tabloid-format magazine” ArtSpiral.

To note some additional press AAAC has received, renowned art historian Thomas McEvilley (1939-2013) wrote several articles for AAAC’s exhibitions and catalogues. One such article from 2000, “Asian American Art: The Transitional Generation”, was rediscovered and posted to the blog earlier this summer; a 1996 article, “Negotiating Modernisms: Contemporary Asian Art and the West,” is available on our website.

China: June 4, 1989, an exhibition on the student uprising at Tiananmen Square that included work by major figures including Xu Bing, Nam June Paik, Zhang Hongtu, Barbara Kruger, Leon Golub, Vito Acconci, and Byron Kim, received significant critical attention. Art in America magazine at the end of 1989 chose China: June 4 as one of the most significant exhibition for the year. In 1992 Douglas Utter wrote in the New Art Examiner, "China: June 4, 1989 is an intimate exhibition. Each work comes forward to bear witness on its own terms. [...] A moving exhibition of political art, it transcended the usual considerations of both politics and art to indict a brutal moment of recent history.” The show was remounted at the Whitebox Art Center in 2014 on the 25th anniversary of the incident, and was reviewed in Manhattan Digest and Beyond Chinatown. 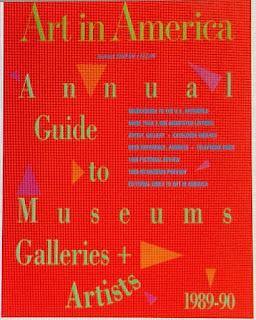 Recently Ryan Wong paid special attention to AAAC’s role in creating a space for Asian Americans in the arts in his 2017 Hyperallergic article “A Brief History of the Art Collectives of NYC’s Chinatown,” where he describes our 1982 panel and exhibition Eye to Eye on the definition of Asian American art as well as the China: June 4, 1989 exhibition. AAAC was also mentioned in a New York Times article by Nikil Saval on Tseng Kwong Chi and Martin Wong, whom we exhibited in 1985 along with Ai Weiwei.

AAAC continues to be grateful for your recognition and support.