AAAC: Why are there so many Chinese restaurants in the U.S.?

This article offers one answer, though clearly this is only one piece of the story.

The reliance on small family operations shapes NY Chinatown into a hub developed over generations for all the farms and supply chains that bring in fresher food at less cost into restaurants throughout out the East Coast. This economy of Chinatown is apparently its own system apart from the global economy and the big box business. Articles have come out about this.

An unspoken aspect of this story is the marketing, or should we say the socio-political dynamics. How do you survive in a hostile climate after you form Chinatowns for safety? The genius of our great-great-grandfather's generation to be welcoming, cordial, innocuous, offering better food at attractive prices and protecting themselves and their businesses with their own security network - gangs- made alliances across ethnic lines but were sometimes not well-controlled. All this was networked with our love of gambling, particularly for the bachelor generation - apart from family, alone, risking everything on their luck. Food has a context.

I know in Newark NJ Chinatown when gambling was still legal, my father had a friend who earned his living solely by driving people who flew into and from Newark airport to gamble in Newark Chinatown. Mayor Addonezio shut this down, and the FBI raids kept fear and anxiety not far from home. There were those who profited from all of this. They built many buildings, family associations, and social structures that united authorities, settled local disputes and established political loyalties, including friends in Washington DC.

And don't forget, when that prestigious Senator proclaimed in Congress in 1882 that this nation would remain Christian or become Sinicized, the Law of Chinese Exclusion turned us all into the unknown, taboo, worse than heathen, opium smokers, the epitome of unAmerican, etc, etc. Yet we were for that very reason attractive, a secret place to go for a bit of excitement that was still a bit ordinary. For decades, from top hats to T-shirts, Chinatown restaurants remained the foil for the man on the street to get away, be in another space, do something just a bit unusual yet as ordinary and jaded as a Humphrey Bogart movie. 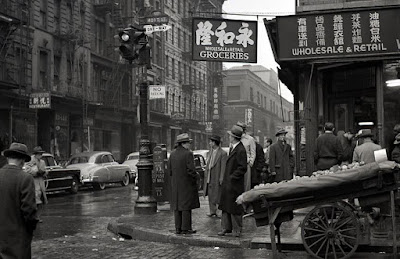 In Newark there were two restaurants that sat more than a hundred tables until smoke bombs were tossed in during the 1930s. Though important, neither the food nor the veil behind a strange language were the reasons for Chinatown's success. For Americans, Chinatown is in the mind, the minds of those who were our patrons. Our image, the key message of our presence, may be definitive, more than the icing/Sini-cizing on the cake.

If Jazz has become largely white, how long can authentic Chinese food and its Chinatowns, those that still exist, last? Fifty years? Maybe less if the gentrification started by Bloomberg has its way. Maybe more, if we learn to play our cards...and music as well as our great great grand fathers did.