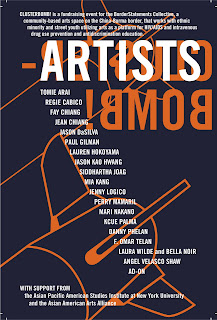 CLUSTERBOMB! is a creative response to physical and psychological displacement in the post 9-11 era of disillusionment and artistic inertia. It is an interdisciplinary, intergenerational and transnational network of artists, writers, activists, cultural workers and youth. Participants are posing a collective challenge to the issue of have and have-nots, why those who have are getting more and those who don't have are getting less or nothing.

When CLUSTERBOMB! closes on January 15 the exhibit will travel during 2009 from NYC to Philadelphia, DC, Los Angeles, San Francisco, Chicago, Detriot and Boston. Local artists at each site will be shown with ad hoc cultural groups and encouraging meetings to form and take place in each locale. By December 2009 a culminating conference of artists and stakeholders will take place in NYC. 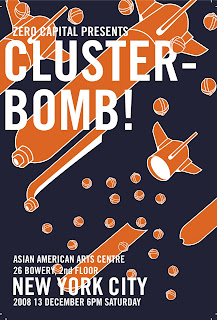 "We present our work on the Bowery, along the line of Jurassic cranes. Clusterbomb! is a pan-ethnic cadre that has its roots in the Asian American cultural movement of the 1970s in New York City; three generations stronger than the Beats & Folk music, we are on the precipice of a Thunderdome that began around Katrina." -Regie Cabico


Zero Capital functions without permanent location and organizational structure as an expanding network of cultural producers and community stakeholders. A website will be launched (www.zerocapital.net) in conjunction with this exhibit, and serve as the vehicle for exchange of information, resource materials and the listing of stake holders websites from local as well as global cultural activists communities.

CLUSTERBOMB! is a fundraising event for the BorderStatements Collective, a community-based art and safe space on the China-Burma border, begun in 2007, that works with ethnic minority and street youth utilizing arts as a platform for HIV/AIDS and intravenous drug use prevention and anti discrimination education.

The Asian American Arts Centre is located in Lower Manhattan at 26 Bowery (just below Canal Street, 3rd floor above McDonalds. Press bell #3.). It is a short walk from the N, Q, J, M, Z, and 6 trains at Canal Street or the B and D at Grand Street or the M103, M15, or M9 buses to Chatham Square.
Tagged